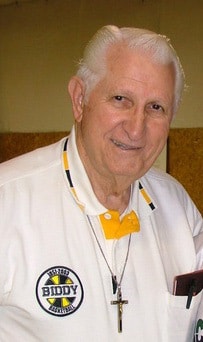 Legendary New Orleans baseball and basketball coach Firmin Simms has passed away at home of natural causes Saturday morning at his home in the Lakefront area near the University of New Orleans.

A graduate of Holy Cross High School, Simms was 91.

Simms, who was inducted into the Allstate Sugar Bowl Greater New Orleans Sports Hall of Fame in 1986, spent 35 years (1955-90) with the New Orleans Recreation Department as a volunteer coach at Bunny Friend Playground in the Ninth Ward.

Simms began as a volunteer coach and ascended to the top of the latter in two sports.

While Simms was known for his baseball exploits, he was equally as accomplished in basketball, coaching area teams to 10 national titles on the Biddy level. Simms eventually earned the title of national director of Biddy basketball.

In 2016, Simms helped create a partnership between Biddy Basketball and the New Orleans Pelicans.

In his 40 years of coaching, Simms guided his New Orleans Biddy teams to 17 national championships. He also won the one and only World Biddy Championship in Scranton, Pa. in 1968.

Simms founded the New Orleans/St. Raphael Biddy program in 1985, along with the late Mosignor Aleman of St. Raphael Church. The organization started with four teams and 30 participants and grew to 60 teams and over 600 boys and girls.

In all sports combined, Simms’ guided teams to well over 50 district and state championships.

The late Louis “Rags” Scheuermann was close to Simms and they are perhaps the two most significant people in youth baseball in the New Orleans area in the 20th century with their experiences at the New Orleans Recreation Deparmtment, with the Babe Ruth program, with the Jefferson Parish Recreation Department (West Bank) and, in the case of Scheuermann, with the All-American League national team and at the college level at Loyola and Delgado as well.

Joe Scheuermann is the son of Rags and succeeded his father as the head coach at Delgado.

“Firmin followed my father in the Babe Ruth program and what he accomplished there was phenomenal,” Scheuermann said. “He touched a lot of young people’s life. His mark on baseball in the city is pretty evident. You cannot talk to a baseball person that did not play for him. His legacy will live for a long time. There are coaches at every level that he coached. He was a pioneer with Biddy basketball and was equally successful. He was special.”

Simms’ son, Jerry, says his father’s vocation was a love affair for life.

“Dad was actually at St. Cecilia before going to coach at Bunny Friend,” Jerry said. “He got involved in coaching at the age of 17 and he let up. He was around St. Cecilia and Bunny Friend for so long. He grew up on Pauline Street, not too far from Holy Cross. He played basketball and was competitive. He did not like to lose. He loved using sports as a vehicle to teach young men in a spiritual way and with life’s lessons. So many people tell me such fine things about my dad.”

Bruce Civello had the rare distinction of playing both basketball and baseball for Simms.

“I played on the Biddy All-Star team that lost the national championship in 1967 but went on to win the world championship that year,” Civello said. He was more aggressive as a basketball coach and was more cerebral as a baseball coach.”

Civello recalls the glory days of his baseball experience with Simms.

“We won the Babe Ruth championship in 1968, the last of four straight national titles Firmin won,” Civello said. “He was really a good man. He was great for everybody. Life was so much different in those days. Everyone loved him. It was a truly great experience playing for him. No one in the city gave more to kids than he did. I learned life’s lessons from him.”

Doug Moreau started in 1973 at the ripe young age of 10 as the public address announcer for Simms’ Babe Ruth teams.

Doug’s brothers, Darryl (basketball) and David (baseball), each played for Simms. Darryl went on to star at De La Salle and Tulane while David starred at De La Salle and has served as athletic director at Jesuit for many years now.

“I served as the announcer and then added scorekeeping duties when I turned 12 for a 15-year old league,” Moreau said. “I’ve been announcing ever since. Firmin is the one who gave me the chance to get started. He was like a second father. I think a lot of people would say the same thing. Think about how many people he coached that played high school, college and even pro ball. He coached Rusty Staub, Will Clark, Kerry Kittles and D.J. Augustin, to name a few.”

A devout Catholic man of faith who regularly shared gospel messages with his pupils, Simms is survived by his current wife, Jackie, along with four daughters and his son. Simms’ first wife, Mary Elaine, passed away several years ago.