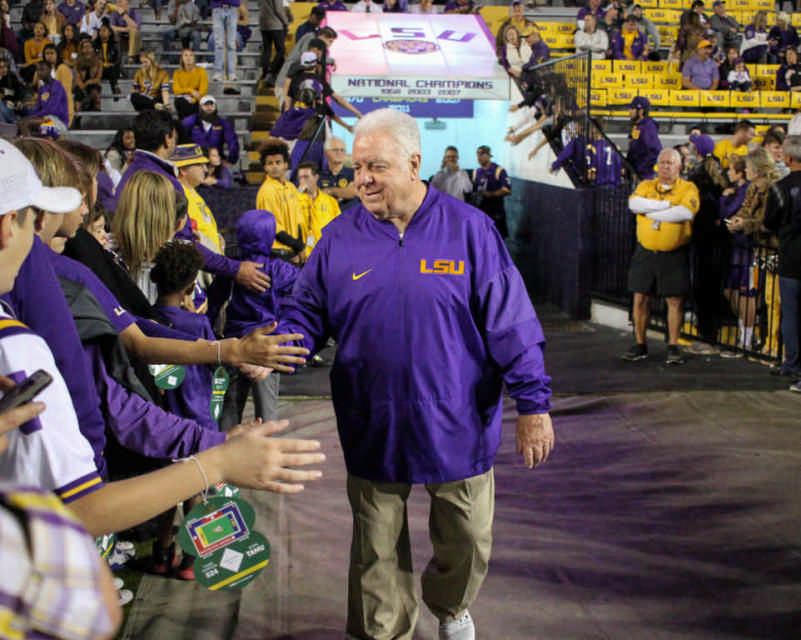 A fine teacher of the game, the retired Jenkins still possesses keen judgement as to what he’s looking for in a quality defensive lineman.

“You want a big guy, a guy that reacts quickly, a physical guy. Someone who is tough, but I want him to be unselfish. It is not a glory position, except when you get sacks. You want technique and assignment. Just do your job.”

Jenkins still serves as a consultant on the college and NFL level.

“I travel much in March and April. I was at Kentucky first week March and Alabama the next week. I was on my way to Georgia the third week, then Tennessee, Arkansas, then the Miami Dolphins,” the still active 78-year old explained. “But the virus shut it down.”

In January and February, he worked with a slew of college and NFL linemen. One player stood out.

“David Onyemata was outstanding” Jenkins noted about the Saints veteran tackle. “You can’t imagine how hard he works, his work ethic, he wants to learn, he’s a great person. He’s the consummate pro, a pleasure to work with. Watching him is like looking at a menu at a New Orleans eatery. Everything looks good.”

Pending the current pandemic, Jenkins will hold his annual Louisiana lineman camp in Thibodaux on June 20. It began 30 years ago with 46 participants and has grown to a high of 504 last year. Instructors include many NFL assistant coaches.

Jenkins coached in the 1980’s under three head coaches at LSU. The greatest success of the period came under Bill Arnsparger but Jenkins, who came aboard in Baton Rouge under Jerry Stovall, remained on staff until Mike Archer was relieved of his duties in 1990.

In 1987, seventh-ranked Ohio State visited Tiger Stadium. The game ended in a 13-13 tie, but plenty of action took place before and during the game.

Defensive lineman Tommy Clapp was a senior captain, along with Wendell Davis, Nicky Hazard and Eric Andolsek. The Buckeyes won the official coin toss earlier, but the game captains returned to midfield for pregame. The Ohio State captains arrived with their helmets tilted on the back of their heads.

“Eric Kumerow and Chris Spielman were teasing Eric. They kept chiding him with ‘Damn No. 76, are you going to hurt me?’ mockingly, As we crossed paths to put our backs to our goals, Eric threw an elbow knocking off both of their helmets,” Clapp chuckled. “(Spielman and Andolsek) were fighting like cats and dogs, trash talking the entire game.”

Ironically, Spielman was drafted in the second round and Andolsek in the fifth round by the Lions in the 1988 draft. They would become not only teammates but roommates and eventually close friends for four seasons until Eric’s untimely death.

A few notable Tigers that are fondly remembered from that era. Of course, Jenkins remembers them all including Clapp and the many quality LSU players from the trenches. While Jenkins stressed to his lineman to do their dirty work, others on defense had to make plays behind them.

Ron Sancho was said to be timed with a sun dial in the 40-yard dash but the linebacker always contended that he would just make plays. He wasn’t wrong.

In a 1987 game against Kentucky, LSU had a return called on a fourth and long situation for the Wildcats. All the LSU players were on board except for Sancho, an Archbishop Shaw alum. As the ball was snapped to Kentucky punter Jay Tesar, Sancho went unabated to block the punt and make the recovery, giving the Tigers great field position en route to a 34-9 win.

The following Monday, the team was gathered in the auditorium to watch film of the Kentucky game. When Archer quizzed Sancho if he had heard the call for a return, he stood up and stated,” God told me to block the punt.”

“That blocked punt turned the game around,” Jenkins explained. “Neither team could do anything. It changed the complexion of the entire game. Kentucky was always a hard fought opponent.”

Sancho had a knack for the big play.

“We’re playing Texas A&M in 1988,” Jenkins continued. “Chris Osgood threw a pass. Sancho tipped it, caught it and ran it back 20 yards for a score. It changed the game. (Sancho) did a lot.”

Sancho finished his days in Tigertown with 37 career tackles for loss and 23 sacks with nine coming in 1987.

Jenkins helped make defenses better. In the ’80’s, he helped many LSU linemen on their way to shots at making it in the NFL. Following his days at LSU, Clapp made his way into the Tampa Bay Buccaneers camp as a free agent. The young rookie made an early impression, but for the wrong reason.

“I knocked over a 45-pound weight on (quarterback) Joe Ferguson’s toe, breaking it. He missed six weeks. I had to shag footballs for him as he sat with his foot propped up. It was crazy. It was the season Vinny Testaverde said that he was color blind. Vinny was super athletic. He was talented enough to have played in the NBA. He could easily dunk.”

Bucs head coach Ray Perkins was in his second season of his four-year tenure in Tampa. His team never won more than five games in a season. “He ran the hardest camp in the NFL,” Clapp laughed. “We had three practices per day in pads. Then we had a three-hour film meeting at night. Guys were high fiving when they were cut, going out the door and glad to be out of there.”

There was no practice squad, so teams were hiding players they wanted to keep by creating injuries. “I had to wear a neck brace whenever I left the facility. I can’t tell you how many times that I walked out only to have someone yell to me to put my collar on,” howled Clapp.

Tommy’s son Will also starred at LSU before making it with the Saints as a late round draft pick. Entering his third season as a versatile interior offensive lineman, Will recently tied the knot with his childhood sweethaert, Lizzie Cousins. The ceremony was on March 14, just beating the coronavirus pandemic shutdown.

At LSU on staff for both father and son Clapp, Pete Jenkins has made his mark on the game for six decades. He’s not done yet.