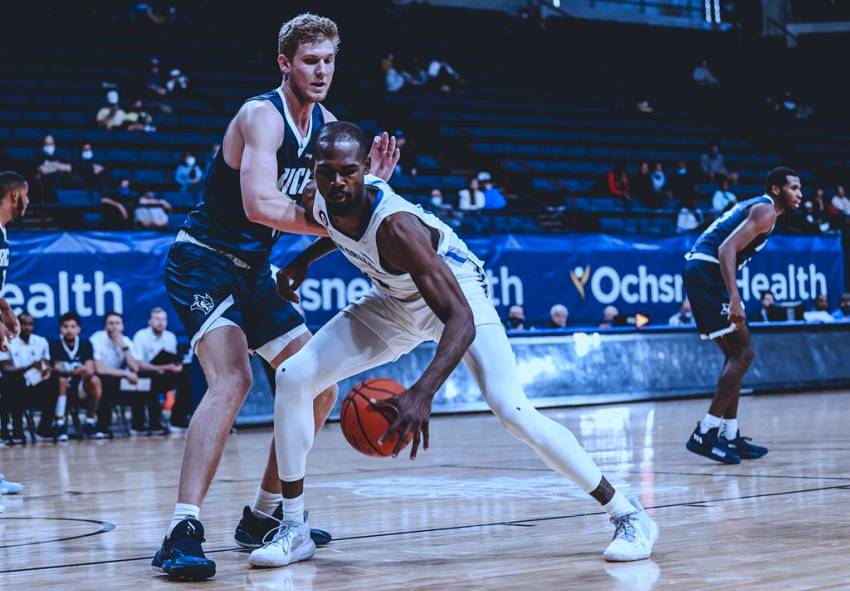 NEW ORLEANS – The New Orleans men’s basketball program kept it close, but a final rally fell just short as the Privateers dropped an 83-78 non-conference contest to Rice on Friday.

INSIDE THE BOX SCORE
– No this isn’t a typo, graduate point guard Derek St. Hilaire paced the Privateers for the fourth straight game as he finished with a game-high 21 points which included a mark of 3-of-6 from beyond the arc. He also recorded three assists and three steals. It is the seventh straight game that the Atlanta Ga. native has finished with double-digit points, a streak dating back to last season. The performance was also the fifth 20-plus point game of his New Orleans career (and second straight).
– Tyson Jackson has shown he is a force to deal with in the paint as he dropped 16 points to go with five rebounds. He also added a block and a steal.
– Troy Green moved into ninth all-time in UNO history as he registered 13 points to go with a game-high seven assists. The senior guard now has 1,353 points for his career, and he can move into eighth-place all-time with just four points next game.
– Simeon Kirkland was the fourth Privateer to finish in double-figures as he racked up 11 points in just 12 minutes on 5-of-8 shooting. It is the first time this season that UNO had four student-athletes reach the 10-plus point plateau in the same contest.
– New Orleans held a 48-28 advantage in the paint.
– The Privateers had just nine turnovers. It was the first time UNO turned the ball over less than 10 times in a game since they did it just eight times against McNeese on Jan. 16, 2021.

HOW IT HAPPENED
– New Orleans dropped the opening half by a 45-38 margin.
– The Privateers got the game as close as three with 39 seconds left. New Orleans forced a 10-second call to get a game-tying attempt off, but Rice forced a turnover on the ensuing possession to close out the 85-78 victory.

NEXT UP
The Privateers will remain home for the Thanksgiving holiday, as they put on the UNO Classic, Wednesday, Nov. 24 through Friday, Nov. 26. Full information can be found on the tournament central page here.