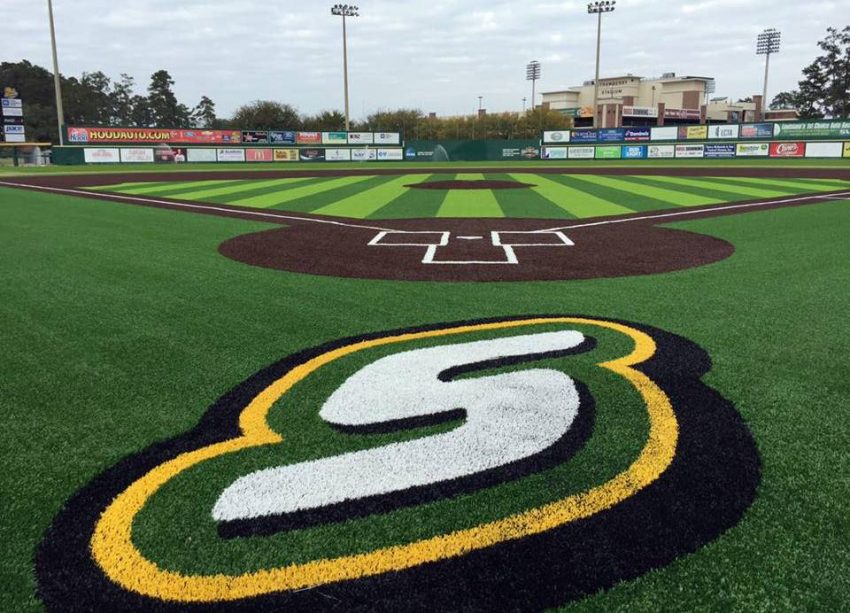 “Our approach every year is to go get a balance of student-athletes that can make immediate impacts, whether they are freshmen or transfers, as well as building for the future,” Riser said. “I think we hit really well on this freshman class. They’re talented. Some will see action early and be a significant part of what we do, while others will factor more into the future.”

The class includes a combination of 15 pitchers, two catchers, eight infielders and two outfielders. Five of the pitchers are left-handers. Of the 10 transfers, five are from Division I institutions and five are from the junior college ranks.

“We had a pretty new club last year and return a lot of those guys,” Riser said. “I think the blend of our returning players, who were just starting to hit their stride in our system, and the new guys coming in will make for a fun and competitive fall.”

The fall practice slate runs through mid-October, wrapping up with the annual Heart of a Lion Fall World Series.

Kyle Bartley | RHP/IF | Fr. | Lake Charles, La. | Sam Houston HS
Bartley joins the program after playing both baseball and football at Sam Houston HS in Lake Charles, Louisiana … No. 8-ranked RHP and No. 26 overall player in Louisiana by Perfect Game … helped lead the Broncos to 100+ wins on the diamond in his career … earned All-District honors in baseball … passed for 7,000+ yards and 75 touchdowns in his gridiron career … earned All-State and multiple All-District honors in football.

Brock Batty | LHP | Jr. | Denham Springs, La. | UL Lafayette
Batty joins the program after transferring from UL Lafayette … spent parts of three seasons with the Ragin’ Cajuns … appeared in 36 games during his career, starting three … compiled a 3-3 record with one save and a 7.54 ERA in 65.2 innings pitched, struck out 58 batters … played both baseball and football at Denham Springs HS … named a Perfect Game Honorable Mention All-American in 2015 and 2016 … earned 5A All-State honors in 2016 and 2017 … father played collegiate baseball at Southeastern.

Antonio Buckley | LHP | R-So. | Centreville, Va. | Harford CC
Buckley joins the program after transferring from Harford CC in Bel Air, Maryland … made relief six appearances from the mound in 2018 before his season was cut short by an injury … finished 1-1 with a 5.52 ERA over 14.2 innings … struck out 16 batters and walked nine … coming out of high school he was the No. 11-ranked LHP in Virginia by Perfect Game … played baseball for coach Rob Hahne at Westfield HS … posted a 15-3 record for his career … compiled an 8-1 record, two saves and a 1.82 ERA his senior season … also led the region in strikeouts … secured an honorable mention on the all Virginia/D.C. Prep Baseball Report … named First Team All-Conference in his final season … received Second Team All-Region honors as a senior … earned All-State honorable mention.

Gaby Cruz | C | Sr. | Miami, Fla. | Bryant
Senior transfer joins the program from Bryant University in Smithfield, Rhode Island … penciled into the lineup 157 times over the course of three-plus seasons … a career .293 hitter at the Division I level with 21 doubles, 13 home runs and 90 RBIs … earned multiple All-Conference selections in addition to picking up All-New England, ABCA All-Region and Northeast Conference All-Tournament Team honors … hit .354 with six doubles, nine home runs, 37 RBI and 29 runs scored as a junior … posted a .449 OBP and a .592 slugging percentage … set career highs in home runs, RBI and runs scored … collected 17 multi-hit games and nine multi-RBI games … hit .302 (42-139) with eight doubles, 26 RBI, 19 runs scored and a .390 OBP as a sophomore … a four-year varsity letter winner for coach Fred Burnside, a former Southeastern assistant, at South Dade HS in Miami, Florida … helped the Buccaneers to a state championship as a sophomore and to back-to-back district titles as a junior and a senior … completed a historic junior season in which he hit safely in all 25 games … hit .536 with 14 doubles, a home run and just five strikeouts … named First Team All-County and First Team All-Region … hit .445 with 20 RBI and 14 doubles as a sophomore … named a Max Preps Underclassmen All-American in 2014 … earned District Catcher of the Year honors in 2014, ’15 and ’16 … second team all-county in 2016.

Joe Delaney | OF | Fr. | Destrehan, La. | Brother Martin HS
Delaney joins the program after playing both baseball and football at Brother Martin HS … No. 8-ranked outfielder in Louisiana by Perfect Game … earned All-District honors as both a sophomore and junior … picked up an honorable mention on the All-State team in 2018 after hitting .412 as a sophomore.

Cam Gauthier | RHP/IF | Fr. | Lafayette, La. | Opelousas Catholic HS
Gauthier joins the program after playing for coach Justin Boyd at Opelousas Catholic HS … earned the win over Ascension Catholic in state semifinals as a junior, helping the Vikings to the state championship game for the first time in school history … named LBCA Pitcher of the Year, Region 5 Pitcher of the Year, All-Parish (P) and All-District (IF) as a junior … earned LBCA All-State (P), All-Parish (P) and All-District (IF) as a sophomore … finished career with a .331 batting average and a 16-4 W-L record, 1.92 ERA and 172 strikeouts.

Cole Hoskins | RHP | Sr. | Anaheim, Calif. | Grand Canyon
Senior transfer from Grand Canyon University in Phoenix, Arizona, where he played for former major leaguer Andy Stankiewicz … made nine appearances out of the GCU bullpen in pandemic-shortened 2020 season, the third-most on the team … featured a 2.08 ERA through first eight appearances before allowing four runs to hot-hitting Arkansas team … opponents’ batting average of .211 ranked fourth on team … winning pitcher after 1.1 innings of one-run relief against Pacific (3/7) … led the Lopes, and tied for fifth in the conference, with 28 appearances during the 2019 season … led the team and tied for sixth in the conference with five saves … had just one wild pitch in 38 innings of relief work … picked up first save in first GCU appearance, a three-inning opening-night outing against Wichita State (2/15) in front of 4,562 at GCU Ballpark … used in three games of a four-game series against Xavier in mid-March where he did not yield a run … recorded a save in back-to-back road appearances at Arizona (4/23) and at New Mexico (5/1) … ended season on high note, pitching five innings in the WAC Tournament and allowing just one run … threw three scoreless innings and earned a save against No. 2-seed UT Rio Grande Valley (5/23).

Rhett Rosevear | IF | Fr. | Denham Springs, La. | Live Oak HS
Rosevear joins the program after playing baseball for coach Jesse Cassard and football for coach Brett Beard at Live Oak HS in Watson, Louisiana … Perfect Game Top 500 player (No. 7-ranked shortstop and No. 29 overall player in Louisiana) … earned All-Academic and All-District honors in both sports … football team captain as a senior, passing for more than 1,000 yards as the starting quarterback … was hitting .520 with nine doubles and 19 RBI as a baseball senior when the season was cut short by the Covid-19 pandemic.

Brennan Stuprich | RHP/UT | Fr. | Kenner, La. | Brother Martin HS
Stuprich joins the program after playing for coach Jeffrey Lupo at Brother Martin HS … No. 4-ranked third baseman in Louisiana by Perfect Game … went 5-0 on the mound and hit .470 at the plate in pandemic-shortened senior season … helped lead the Crusaders to a 26-6 record and the state semifinals as a junior … compiled an 8-2 record and 0.82 ERA on the mound … hit .438 with 30 RBIs at the plate … earned All-State honors along with being named District and All-Metro MVP.

Gage Trahan | RHP | Jr. | Maurice, La. | Little Rock
Trahan joins to program after transferring from Little Rock … appeared in three games out of the bullpen for the Trojans with a 10.38 ERA over 4.1 innings pitched during pandemic-shortened 2020 season … logged outings against McNeese (Feb. 22), Oklahoma State (Feb. 25) and Southern Miss (Mar. 6) … lettered for two years at LSU-Eunice under coach Jeff Willis … helped the Bengals to a record of 110-14 over a two-year span to go along with a National Championship as a freshman in 2018 … made 13 appearances out of the bullpen for LSU-Eunice, striking out 24 opposing batters, giving up 14 hits in 17 innings during 2019 season … made seven appearances in 2018, including three starts and finished with a 5-0 record and 2.35 ERA as a true freshman … in 15.1 innings pitched, gave up only six hits and seven walks while striking out 22.

Nathan Tribble | IF | R-So. | Ponchatoula, La. | Nicholls
Transfer from Nicholls … one of just two Colonels to start all 18 games of the pandemic-shortened 2020 season, all at second base … finished with a .196 batting average off 11 total hits … crossed home plate for the Colonels on eight occasions while picking up five RBIs … walked eight times and posted three steals … appeared in 13 games during the 2019 season before suffering a season-ending injury in early March … compiled a .225 batting average on nine hits … notched nine RBIs, scored seven times and jacked two homers … saw action in 21 games as a freshman in 2018, making 10 starts … batted .212 off seven hits … scored six runs along with driving in a pair … a four-year letterman at Ponchatoula HS under coaches Johnny Brechtel, Stephen Pugh and Jeremy Harper … earned All-State honors as a senior … three-time All-District honoree.

Christian Westcott | IF | Fr. | Mandeville, La. | Lakeshore HS
A multi-sport athlete, Westcott will play both baseball and football at Southeastern … joins the program after playing baseball for coach Steve Ceravolo and football for coach Craig Jones at Lakeshore HS in Mandeville, Louisiana … named Louisiana Mr. Football, Gatorade Player of the Year and Class 4A Offensive MVP after senior season at Lakeshore High School … helped Titans to state semifinals … completed 151 of 275 passes for 2,779 yards and 35 touchdowns … rushed for 1,368 yards and 38 touchdowns … recorded 20 tackles for loss, 6.5 sacks and four forced fumbles … pitched and played shortstop for the Titan baseball team … helped lead the squad to 26 wins and the state semifinals as a junior, hitting .474 at the plate and serving as the team’s closer.

Tyler Wynkoop | LHP | So. | Huber Heights, Ohio | Sinclair CC
Wynkoop joins the program after transferring from Sinclair CC in Dayton, Ohio … appeared in three games, all in relief, at Sinclair CC for coach Steven Dintaman before the 2020 season was cut short by the Covid-19 pandemic … compiled a 1-0 record and 0.00 ERA … struck out 16 batters in 6.1 IP (22.74 K/9) … allowed three hits and walked five batters … earned the win over Kalamazoo Valley CC in the the team’s final game of the season … played his freshman season at Indiana Wesleyan in 2019 … appeared in 12 games, starting two … compiled a 2-1 record and a 7.43 ERA in 26.2 innings pitched … struck out 28 and walked 22 … earned both wins against Grace College.