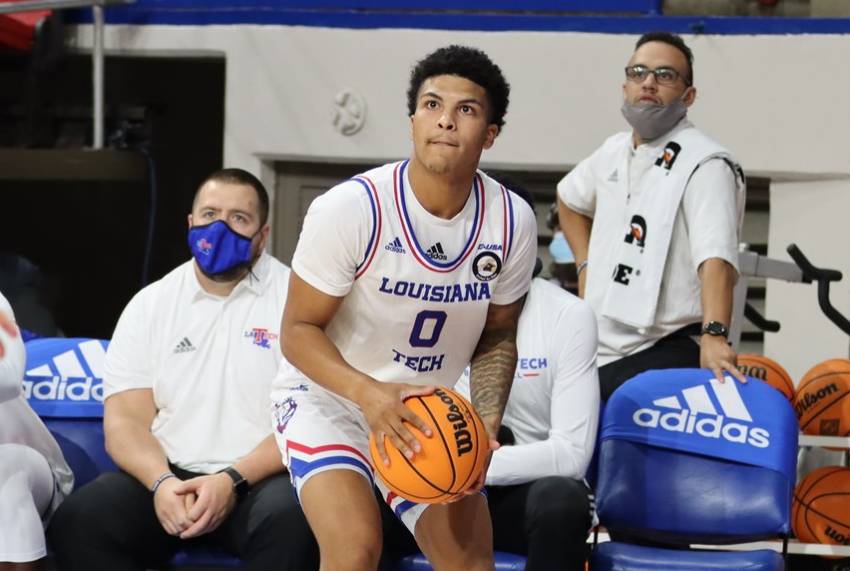 RUSTON – Louisiana Tech remained perfect at home and in conference on Thursday night as they pulled away from Southern Miss in the second half to register an 80-57 victory inside the Thomas Assembly Center on Karl Malone Court.

The Bulldogs finished with a season-high 21 assists and sank 11 three-pointers with 10 of those coming from Keaston Willis, David Green and Cobe Williams.

Green buried all three of his in a three-minute span midway through the second stanza, the final one forcing a timeout by the Golden Eagles as the Bulldogs had a 61-34 advantage with 8:38 to go in the game. The lead grew to 72-38 with 4:39 remaining.

USM took its only lead of the contest at 15-14, but Willis sparked a 14-0 run with two of his triples. Holding a 31-24 lead at the midway point, the ‘Dogs used a 13-0 run early in the second stanza before Green started draining three-pointers.

USM shot 37.3 percent from the field (22-of-59) and had three players in double figures, including Tyler Stevenson who finished with a team-high 17 points.

“I thought it was a total team effort for our group. I did not like the way we ended the second half. Give a lot of credit to Southern Miss. They are a hard-playing team. I really challenged our guys [at halftime] to be more mindful of the things we want to do, play great defense, take care of the basketball and take great shots. I thought they did a much better job [in the second half] of playing with energy and grit. Seeing 21 assists is a beautiful sight to see.”

NOTABLES
• With the 80-57 win, the series between LA Tech and Southern Miss is now tied at 44-44. The Bulldogs have won 14 of the last 16 meetings.
• LA Tech extended its winning streak to six and has won 10 of its last 11 games.
• The Bulldogs improved to 14-3 on the season, its best record through 17 games since the 2013-14 season.
• LA Tech improved to 5-0 in Conference USA action, matching its best start to league play (started 5-0 in 2014-15).
• LA Tech has now won 17 straight home games versus Southern Miss and improved to 10-0 against the Golden Eagles inside the Thomas Assembly Center.
• The Bulldogs extended their home winning streak to 18 with the win.
• The Bulldogs made 11 three-pointers, marking the eighth time this season they have made 10+ in a game.
• For the fourth time in the last six games, LA Tech held its opponent to under 60 points.
• Keaston Willis led all scorers with a game-high 21 points. It was his third 20-point game of the season.
• David Green scored 17 points off the bench. It was his second time in double figures this season.
• Cobe Williams tallied 12 points, reaching double figures for the eighth time in the last nine games. The Bulldogs are 17-2 all-time when he scores at least 10 points.
• Kenneth Lofton, Jr. led the team in rebounding for the 14th time this season with 10 boards.

UP NEXT
LA Tech now heads to Hattiesburg on Sunday, Jan. 16 to face USM inside Reed Green Coliseum. Tipoff is set for 2 p.m. CT and will be streamed live on ESPN+.