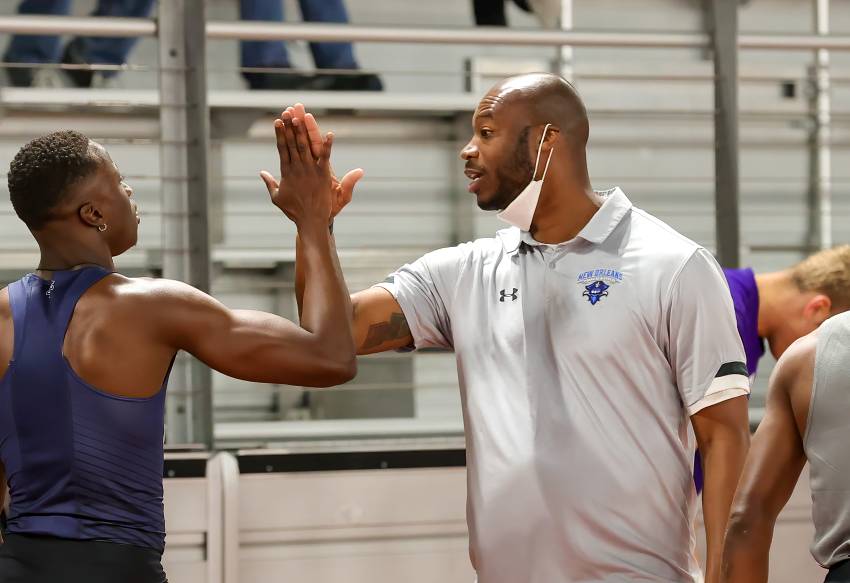 The hiring is pending the approval of the Board of Supervisors for the University of Louisiana System.

“We always talk about competitive excellence as part of our mantra within our athletics department, and we have hired a competitor in Brian Johnson,” said Tech VP and Director of Athletics Eric Wood. “Brian has excelled at the highest level of his profession both as an Olympian and a national champion. He has competed against the best the world has to offer.

“Brian has proven in his coaching career that he can develop student-athletes into national championship caliber competitors. We are excited about Brian taking the reigns of our track and field program and leading it back to a championship level.”

Johnson comes to Tech from the University of New Orleans where he has led the Privateers track & field and cross country programs since the fall of 2018. He takes over the reins after 40-year veteran Gary Stanley retired at the conclusion of the 2021-22 season.

“This is an amazing moment for me in a lot of ways, and I am honored to become the new head track and field coach for Louisiana Tech,” said Johnson. “First, I’d like to thank Dr. Eric Wood and Tim Padgett for giving me this opportunity. I look forward to working with the entire athletic department and the track and field student athletes.”

During his collegiate career at Southern in Baton Rouge, Johnson – who was a member of the 2008 United States Olympic Track & Field team that competed in Beijing, China – became only the third Jaguars athlete to win an indoor NCAA Division I national title when he captured the long jump crown in 2003 with a best leap of 8.28m (27-2).

In 2008, he finished second at the Olympic Trails in Eugene, Oregon, which qualified him for the national team. He went on to finish 22nd overall at the 2008 Olympics.

Also during that time, Johnson posted a personal best of 8.33m with his second-place performance at the Fort-de-France international meet and he also won a silver medal at the IAAF World Athletics Final.

During his coaching career in the Big Easy, Johnson guided both the men’s and women’s cross country and men’s and women’s track & field programs to record-setting performances at the Southland Conference Championships. All six teams have set a team point total record since joining the conference at their respective championship meet.

“I would like to thank Tim Duncan and Dr. John Nicklow for entrusting me with the University of New Orleans Track and Field program,” said Johnson. “I am forever grateful for the opportunity and the experience. I would like to thank all the athletes I had the opportunity to coach. We had some great moments in these last four years, and I wish them continued success.”

Most recently, Kone competed in the 2022 NCAA Outdoor National Championships in the 100m and the 200m. Kone, who was the Southland Conference Track and Field Athlete of the Year, was the first standout in UNO track and field history to advance to two straight NCAA Outdoor Championships and the only Privateer to ever compete in two events in nationals.

Johnson has also helped in the mentoring of Arina Kleshchukova, who was the first athlete in school history to advance to the NCAA Division I Cross Country National Championships in 2019.

Kleshchukova won four of her first five races in 2019, including winning the Southland title to advance to the South Central Regionals. There she placed tenth overall to earn All-Region honors and a chance to advance to NCAAs. Kleshchukova earned numerous awards including Southland Women’s Runner of the Year and Louisiana Runner of the Year by the Louisiana Sports Writers Association.

The Iowa, Louisiana, native has been in the coaching ranks since 2003 and stopped competition following the 2010 season. He was ranked as high as No. 2 in the United States in the long jump by Track & Field News following his 2008 campaign and ended as the No. 3 ranked athlete in the event in 2010. Johnson was ranked in the top-10 in the world in his event every year between 2005-10.

“I would like to thank my family, my children, and all of my close friends who have been there every step of the way in this process,” said Johnson.

Johnson has had coaching stops at Southern, Alcorn State and the University of Georgia. He graduated with a bachelor of science degree in political studies from Southern in 2003.