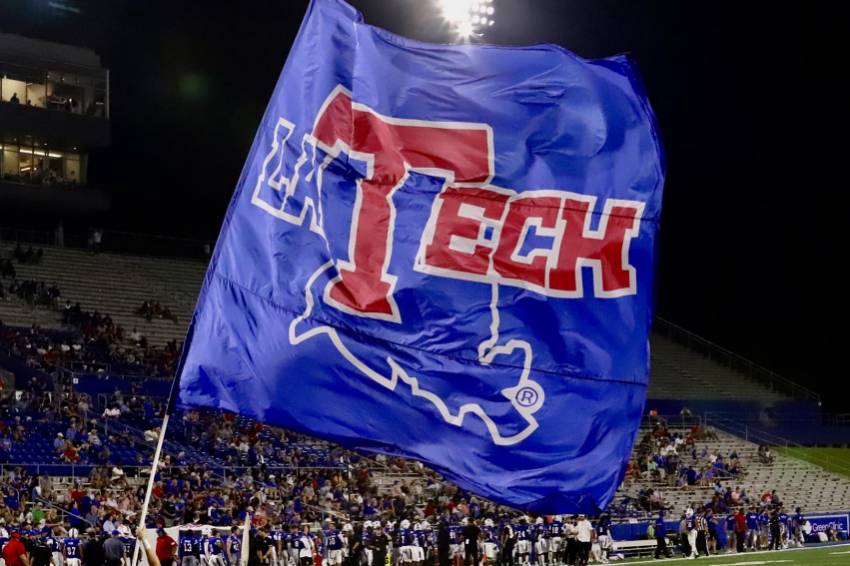 These pillars were fully embraced during the 2021-22 athletic season as Louisiana Tech put together another banner year on the playing fields and courts, in the classroom and with the growth of the LA Tech brand.

As the 2022-23 quickly approaches, let’s take one more look back at the best moments from the past year.

TEAM HIGHLIGHTS
Bowling made their second consecutive NCAA Regional appearance after receiving an at-large bid to the National Collegiate Women’s Bowling Championships. The Lady Techsters posted 31 wins over top-25 programs in route to making it all the way to the regional finals (Elite Eight), the farthest the program has ever gone in the postseason.

Baseball made their second straight NCAA Regional showing (first back-to-back appearances since 1986-87) as well after earning an automatic bid with its Conference USA Tournament title, which came in Hattiesburg, Miss. thanks to back-to-back walk-off victories in the semifinals (8-7 win over Old Dominion) and finals (9-8 win over UTSA). The Bulldogs received the No. 2 seed in the Austin Regional, claiming win No. 43 on the season against Dallas Baptist (tied for second most wins in program history).

Softball had one of the biggest turnaround seasons in the country under first-year head coach Josh Taylor, going from eight games under 500 (22-30) in 2021 to 19 games over 500 (39-20) this season in route to a C-USA regular season championship. The Lady Techsters won nine of their last 10 league games, including a thrilling 8-7 come-from-behind win over Southern Miss in the regular season finale, to claim their second ever C-USA regular season title (were picked seventh in the preseason).

After dropping the first four conference games, Women’s Basketball won 11 of their last 14 to claim the C-USA West Division title (their first regular season championship since 2011). The Lady Techsters ended up registering a 21-win season (the most since 2010-11), a run that included a C-USA Tournament championship appearance as well as participation in the WNIT.

Men’s Basketball recorded its second straight 24-win season, marking the ninth time in the last 10 seasons with at least 20 victories (one of only 18 Division I teams in the country to do so). They too made a run all the way to the C-USA Tournament championship after defeating Marshall, WKU and top-seeded North Texas. It marked just the eighth time in C-USA history that both the men’s and women’s basketball teams from the same school reached the title game.

Tennis had one of its best seasons in program history, producing the second most wins ever with 18 and finishing the year ranked No. 9 in the ITA Southern Region. During the season, they strung together program-setting winning streaks of 14 straight wins and 12 straight home wins.

INDIVIDUAL HIGHLIGHTS
One of the biggest individual highlights came way back in July of last year when Kenneth Lofton, Jr. helped lead Team USA to the gold medal at the 2021 FIBA U19 World Cup in Latvia. Junior ended up anchoring the team in scoring for the entire tournament, averaging 13.1 points.

Fast forward toward the end of the athletic season when Golf’s Sam Murphy became the second player in program history to earn an at-large bid as an individual to compete in an NCAA Regional. He went on to finish in a tie for 23rd at the Norman Regional, the third-best finish ever by a Bulldog in the postseason.

Another end-of-the-year highlight came on day two of the 2022 MLB Draft when history was made as four Bulldogs were selected in the first 10 rounds – Ryan Jennings (4th round – 128th overall), Kyle Crigger (7th round – 202nd overall), Taylor Young (8th round – 255th overall) and Cade Gibson (10th round – 292nd overall). It was the most selections ever in the top 10 rounds and tied for the most drafted players by any school in the state of Louisiana.

To top it all off, 20 program records were broken by Bulldogs and Lady Techsters during the 2021-22 athletic season.

ACADEMIC HIGHLIGHTS
Academically, 55 student-athletes earned their degrees during the 2021-22 academic year while the department produced a cumulative grade point average of 3.12 (10th consecutive term with at least a 3.00).

Netterville and Fincher also earned CoSIDA Academic All-America honors, becoming just the fourth and fifth LA Tech student-athletes to receive this award multiple times. There has now been a total of 26 Academic All-America selections (12 in the last decade). Netterville was also selected as one of 14 recipients for the Conference USA Jim Castaneda Postgraduate Scholarship.

BRAND/NIL HIGHLIGHTS
The redesigned LATechSports.com had a banner year, generating the most web traffic on record. For the 2021-22 athletic season, there were 3.06 million page views (12.6 percent increase over last season’s then program record) with over 1.33 million sessions.

LA Tech also had impressive increases through social media as 31 of the 36 accounts across Facebook, Twitter and Instagram had at least a 10 percent increase in followers and 18 of those had at least a 20 percent gain. Overall, there was a 17.9 percent growth in followers.