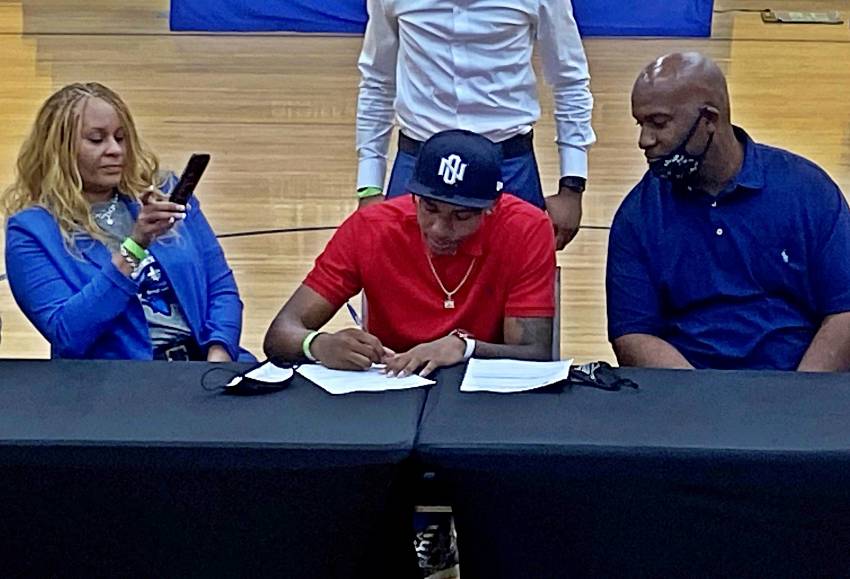 The 6-foot-2, 180-pound Vincent follows Lamont Berzat, another former outstanding guard from what was Landry-Walker, to UNO.

“He (Berzat) came to a few games,” Vincent said. “He was telling me what I was lacking in, what I need to do better at and the things I can improve on. I took a lot from my big brother.”

Vincent had offers from Coastal Carolina, McNeese and Southeastern Louisiana.

Vincent averaged 19 points and six rebounds as a junior and averaged 20 points and 6.5 rebounds this past season.

“They (UNO) were on me from day one,” Vincent said. “They were on me hard when everybody else wasn’t. They thought I could be their next top player. Every single day, they were on me. I appreciated the love. It’s a blessing to stay in town to play where my family can watch me play.”

“They talked to me, they talked to me, he was letting me know I was his guy from day one,” Vincent said. “That’s all he used to tell me. He told me I would play a whole lot of minutes and be his next big star.”

In an official release, Slessinger raved about Vincent’s potential.

“I am extremely happy to have Jamond Vincent join our program,” said Slessinger. “Jamond was someone we targeted very early in the process as a local talent that we needed in our program. He has played for great coaches with New Orleans Elite and Landry High and we know that training will carry over to his success here. We are getting a strong, elite-level athlete who should bring a great deal of excitement to the Lakefront with his leaping ability and toughness.”

Vincent is known by “Turk” to those who know him best.

“I was chubby when I was a baby,” Vincent said. “When I was playing football, I wasn’t Turk, though. It used to be Turkey.”

Vincent helped lead the Buccaneers to a 17-13 regular season and a run to the state quarterfinals in the Class 4A playoffs.

What does he see as his best skill?

“Getting to the goal and finishing and playing defense,” Vincent said.

Landry head coach Rob Wallace is thrilled for Vincent and thrilled that he is staying home to play college basketball.

“This is real special,” Wallace said. “I’m happy for him. He put the work in. He is a young man who is always going to do the right thing. He’s a positive kid. His parents did a great job with him. He’s a freak of nature. He’s got things you can’t teach. That’s God given. He’s a special talent. He has great legs, he’s a high-flyer. He’s a total basketball player. To stay here at UNO and get to see him play is big.”