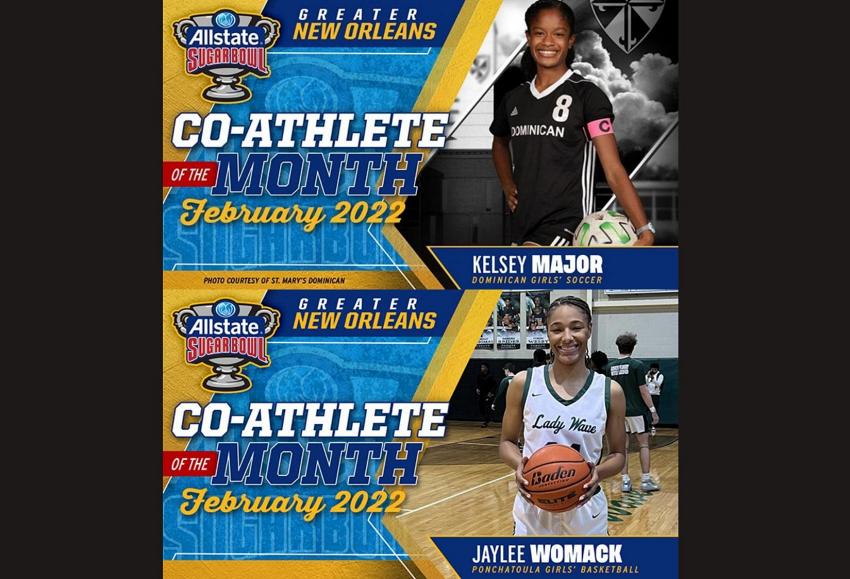 Major led Dominican to the LHSAA Division I girls’ soccer state championship in February. The team’s leading scorer with 37 goals and 20 assists, Major scored a goal in the 3-1 title-game victory over St. Joseph’s and was selected as the championship match’s outstanding player. For the season, Major scored 38 goals to lead her team for the second straight year. As a junior, Major was named Louisiana’s Gatorade Player of the Year in both cross country and soccer – making her the first boy or girl from Louisiana to be named the Gatorade Player of the Year in more than one sport in the same school year. She has signed to play soccer at LSU in the fall.

Womack, meanwhile, was simply dominant in leading Ponchatoula to a perfect 7-0 record in February. In those seven games, she averaged 32.7 points, 7.4 rebounds, 3.4 steals and 3.1 assists per game. She connected on 55.6 percent of her shots from the field and 92.7 percent (24-of-26) of her free throws (92.7%). She had a high mark of 42 points in a playoff win over Sam Houston and also a 38-point effort in a victory over Fontainebleau. She added four other 30-point games and a pair of double-doubles. Her February efforts were capped by a victory over Ruston in the LHSAA Class 5A state quarterfinals on Feb. 24 to launch the Green Wave into the state semifinals for the third straight year. However, after suffering losses the last two years, this year, Ponchatoula rode Womack to a semifinal victory over top-seeded Walker and a championship win in overtime against No. 2 Parkway. Womack has signed to play basketball at Tulane.

The February co-winners were selected over four other standout athletes:

Santiago Perez, a senior for Xavier University of Louisiana’s men’s tennis team, helped his team win three dual matches against top-15 NAIA opponents, all on the road, in the final 11 days of February. The senior from Pereira, Colombia, went 7-0 in singles, 4-0 in doubles during the month. On Feb. 20 at Georgia Gwinnett, seven-time defending NAIA national champion, he defeated Matthias Haim, a first-team NAIA All-American and the most outstanding player of NAIA nationals in 2021 on Haim’s home court. On Feb. 28 at William Carey, ranked seventh in the NAIA, Perez and Juan Ramirez clinched the doubles point with a 6-3 victory and then ended the dual on the first singles court when he rallied to defeat Daniil Klimov — No. 3 in the ITA NAIA rankings — 3-6, 6-4, 7-6 (13-11).

Glenn Price won his fourth straight LHSAA wrestling state championship in February as he took the 120-pound title in Division II to help Archbishop Shaw to a second-place finish – its best since 2015. In addition to being the first freshman in school history to win a state title in 2019, he has posted a career-mark of 164-13 (92.6%), including a streak of 63 consecutive wins. An NHCSA All-American, he also excels in the classroom with a 4.2 grade-point average.

In eight games in February, Moon Ursin, a senior transfer from Baylor by way of Destrehan High School, averaged 13.9 points, 7.1 rebounds and 3.5 assists to lead the Tulane women’s basketball team to a perfect 8-0 to reach 20 wins for the season. That locked up a third-place finish in the American Athletic Conference. Ursin had three games of 18 points, including a road victory over preseason conference favorite South Florida on Feb. 6. For the season, Ursin led Tulane in scoring (13.7), rebounding (8.6) and assists (3.6).

The Allstate Sugar Bowl has established itself as one of the premier college football bowl games, having hosted 28 national champions, 100 Hall of Fame players, 51 Hall of Fame coaches and 20 Heisman Trophy winners in its 88-year history. In addition to football, the Sugar Bowl Committee annually invests over $1 million into the community through the hosting and sponsorship of sporting events, awards, scholarships and clinics. Through these efforts, the organization supports and honors thousands of student-athletes each year, while injecting over $2.2 billion into the local economy in the last decade. For more information, visit www.AllstateSugarBowl.org.