LSU’s new football coach and its new men’s basketball coach both seem to be off to good starts with those tasks, though only the won-lost records next season will be a definitive gauge of how well they’ve done.

Both coaches brought Tigers supporters up to date on their programs when the LSU coaches caravan stopped at Walk-On’s recently.

Kelly told reporters beforehand that his message around the state has been to tell Tiger fans what they should expect from his teams.

“I didn’t come down here with any other expectation but putting together a championship program,” the former Notre Dame coach said. “It’s a process, but you should look at our football team and have an expectation of what a head coach has been doing for 32 years. This should be a prepared football team that plays hard, that plays hard for four quarters, that is ready to play every game.”

Kelly said he came up short in his attempt to add an offensive lineman and a defensive player with his two remaining scholarships before the May 1 transfer portal deadline arrived.

“We weren’t able to get to (the roster maximum of) 85,” Kelly said, “so we’ll be below water going into this recruiting (season), but we’ll be able to catch up.”

The NCAA has lifted the 25-player limit for a single year for the next two recruiting classes.

Kelly called 25 “an antiquated number” because it predated players’ ability to leave early for the NFL or enter the transfer portal.

The coach added that he has been much more “hands on” in recruiting at LSU than he was at Notre Dame.

“Notre Dame became for me a little bit more of a deal closing,” Kelly said. “‘We’ll bring the head coach in at the end.’ (At LSU) I’m in at the start, which I kind of like – developing relationships from the very beginning.”

Kelly said recruiting enabled him to get “a real feel for the state of Louisiana.”

“No disrespect to Indiana, but it doesn’t turn out the same number of NFL prospects as the state of Louisiana does,” Kelly said. “At Notre Dame we were trying to pull kids out of L.A. and all these different areas. It wasn’t the same.

Kelly said the return of two offensive linemen – Anthony Bradford, who has been “unavailable” since the middle of last season, and Garrett Dellinger, who missed much of last season and all of spring practice because of a shoulder injury – “adds a whole lot” to the offense.

He called Bradford, who he has “pegged as a tackle,” a “huge get for us.” Dellinger has recently been cleared for full contact. 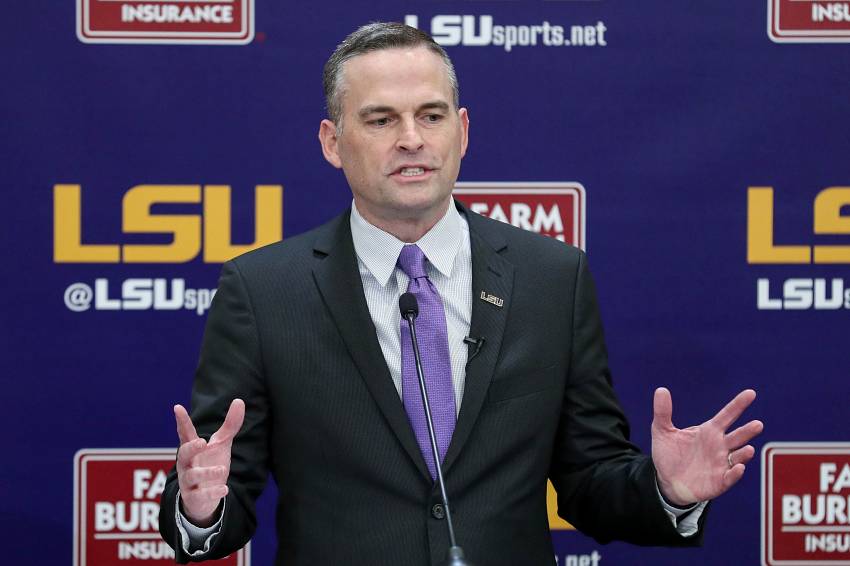 As for McMahon, he has gone from zero players to 13 and the third-rated recruiting class in the SEC since being hired April 26 to replace Will Wade. McMahon inherited no players but a serious NCAA investigation from Wade.

“With the circumstances and what we walked into, I’m definitely thrilled,” the former Murray State coach said. “Not only do I think we have good talent, but I think we have our kind of guys who really fit the culture and the foundation of what LSU basketball is going to be about for years to come.”

McMahon called the roster building “very challenging,” but he came in with “a very detail-oriented, methodical way that we like to go about recruiting.”

“The majority had already left, which is fine,” McMahon said. “This is college basketball in 2022.”

But three of Wade’s former players did choose to re-up with McMahon – forward Mwani Wilkinson and guards Justice Williams and Adam Miller.

Phase No. 2 was to use McMahon’s coat-tails out of Murray State and they carried three of his former players who are “older, more experienced, proven winners, guys who understand what the culture of LSU basketball is going to be about.”

Those players are the Ohio Valley Conference Player of the Year (center KJ Williams) and guards Justice Hill and Trae Hannibal.

Phase No. 3 involved newcomers from the transfer portal.

“Kendall Coleman (Northwestern State), Cam Hayes (N.C. State), Derek Fountain (Mississippi State) – all 3 guys have played 2 years of college basketball and have 3 years of eligibility remaining. So they fill a lot of needs there.”

Phase No. 4 was high-school recruiting.

“I believe at LSU you can recruit the best players in the country,” McMahon said. “So we wanted to go right in on the best available remaining players for the Class of 2022 and build those relationships and get them to Baton Rouge. I feel like we were able to do that with the high-school class that we signed.”

“I love the talent that we’ve been able to bring in,” McMahon said. “I think they’re about the right things that lead to winning – hard work, unselfishness, toughness, accountability. Those are the things we’re going to continue to build the program on.”

McMahon had to overcome the expectation that the NCAA will impose sanctions on the Tigers in the not-too-distant future.

“Some people are going to tell you no right away because of the cloud that has been over the LSU program, but I have no control over that,” McMahon said. “We’re just moving the program forward and we’re going to get the right people in the program and build it that way.

“I think we have a player development program that has proven to be very successful for a lot of years to help players get to the highest level of basketball. I think we have a style of play and an offensive and defensive system that prepares players not only to win in college but that also prepares them for the next level. And then I think the LSU brand is strong across the country and obviously the opportunities that the SEC presents as well. I think we have a lot to sell.”