HAMMOND, La. – After helping No. 17 Southeastern Louisiana University to its fourth postseason appearance in school history, 18 SLU student-athletes were named to the 2021 All-Southland Conference Football Teams released by the league office on Tuesday. 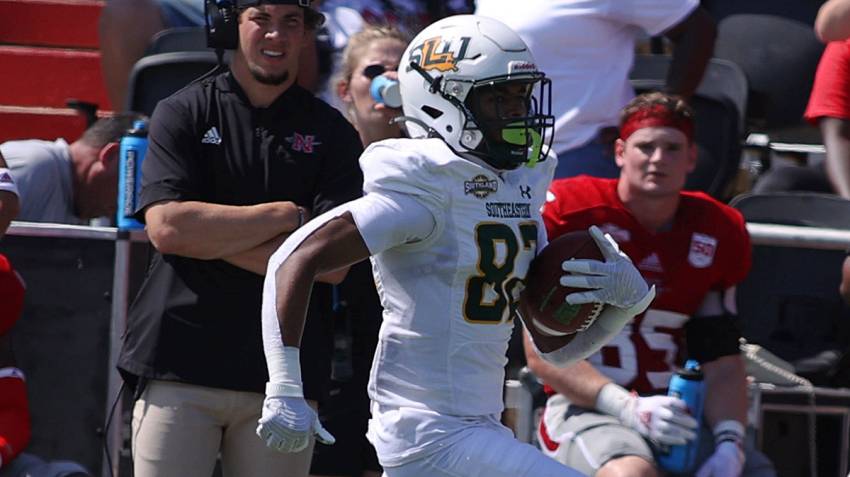 Southeastern will host No. 22 Florida A&M in the first round of the NCAA FCS Playoffs on Saturday at 6 p.m. in Strawberry Stadium. The Lions-Rattlers game will be televised on ESPN+. The game can also be heard in the Hammond area on Kajun 107.1 FM, The Highway 104.7 FM and The Boss 103.7 FM/1400 AM, as well as online at www.kajun107.net.

Season ticket holders, as well as faculty and staff will have until Tuesday at 4 p.m. to purchase their tickets through the Southeastern Athletics Ticket Office. Starting Wednesday at 9 a.m., the remaining allotment will be made available to the public.

Cole Kelley, Player of the Year | First Team QB
The reigning Walter Payton Award winner has been even more productive in his final season in Hammond … Passed for 4,382 yards and 38 touchdowns on 339-for-457 passing … Rushed for 442 yards and 16 touchdowns … Leads nation in passing yards, total offense, points responsible for and completion percentage … Also ranks in the top five in FCS in passing touchdowns (3rd) and rushing touchdowns (3rd) … Only player in FCS to be ranked in the top 10 nationally in both passing and rushing touchdowns … Closed out the regular season as the program’s single-season and career record holder in rushing touchdowns (33 – career, 16 – season), total touchdowns scored (35/16), passing yards (7,860/4,382), passing touchdowns (66/38), touchdowns responsible for (101/54) and total offense (8,561/4,824) … Vying to be the third two-time Walter Payton Award winner in school history … Named All-Southland Conference for the second straight season … Was Southland Offensive Player of the Year in the spring.

Nolan Givan, First Team TE/HB
Immediate impact player in his debut season with the Lions … Second on the team with 46 catches for 454 yards and five touchdowns.

Rendon Miles-Character, First Team OL
Started all 11 games at right tackle for a Lion offense that leads the nation in total offense, scoring offense, completion percentage and first downs and has scored 50 or more points in an FCS-high six games … Named All-Southland Conference for the second straight year.

Alexis Ramos, First Team LB
Led Southeastern with 71 tackles during the regular season … Also had 6.5 tackles for loss and five pass breakups … Named All-Southland Conference in all three seasons of his Lion career.

Zy Alexander, First Team DB
Sixth nationally with six interceptions for a Lion defense that is sixth in FCS with 16 interceptions … Intercepted passes in four consecutive Southland games during one stretch … Broke up a team-high six passes and ranks second in the league in passes defended … Interception total is tied for the third-highest single-season in program history.

John Allen, Second Team OL
Established himself as the starting left guard for the Lions in his second season in Hammond … Key contributor for a Lion offense that leads the nation in total offense, scoring offense, completion percentage and first downs and has scored 50 or more points in an FCS-high six games.

Jalen Bell, Second Team OL
Started 10 games at left tackle for a Lion offense that leads the nation in total offense, scoring offense, completion percentage and first downs and has scored 50 or more points in an FCS-high six games … Named to the all-conference team for the second straight season.

Drew Jones, Second Team OL
Leader of the SLU offensive line started all 11 games at center for a Lion offense that leads the nation in total offense, scoring offense, completion percentage and first downs and has scored 50 or more points in an FCS-high six games … Repeat All-Southland Conference selection.

Donniel Ward-Magee, Second Team DB
Second on the team with 46 tackles (31 solo) from his free safety position … Broke up a pair of passes and forced a fumble … Named second team All-Southland for the second straight season.

Ethan McMullan, Honorable Mention OL
Started all 11 games at right guard for a Lion offense that leads the nation in total offense, scoring offense, completion percentage and first downs and has scored 50 or more points in an FCS-high six games … Named All-Southland Conference for the second straight season.

Austin Dunlap, Honorable Mention P
His 44.1 punting average was the highest in the Southland and would be 10th in FCS if the high-powered SLU offense allowed him to reach the minimum punts per game requirement to be listed in the national rankings … Averaged 44.9 yards per punt versus Southland Conference competition … Repeat All-Southland Conference selection.

Mateo Rengifo, Honorable Mention K
Connected on 7-of-10 field goals in his second season with the Lions and is the leading scorer in the Southland among kickers … Also been very efficient on kickoffs, recording 43 touchbacks this fall … Named all-conference for second time in as many seasons.

Jack Henderson, Honorable Mention DB
Fourth on the team with 43 tackles … Also has 2.5 tackles for loss and an interception to his credit … Named All-Southland for the second straight season.