One rivalry matchup down, one more to go.

The meeting of Class 4A powers Karr and Neville was the sixth in the postseason since 2011. Those epic meetings are now tied 3-3 after No. 1 Karr remained unbeaten with a 25-13 victory over No. 4 Neville in the Class 4A semifinals Friday night at Behrman Stadium.

The Cougars were never truly threatened but were never able to pull away from the gritty Tigers.

Neville never led but after a Ronnie Jackson two-yard touchdown run, Jordan Thomas connected with Daelan Mitchell on a 42-yard touchdown pass and the game was tied 7-7 after one quarter.

The Cougars took the lead for good in the second quarter as Leonard Kelly hit Larry Junior on a 74-yard touchdown pass and it was 13-7 by halftime.

Karr clinched the victory with a huge third quarter, storming out of the locker room to score twice to take a 25-7 lead as Kelly threw a 20-yard touchdown pass to Destyn Pazon before Ahmad Antoine added to the lead with a three-yard touchdown run.

Neville scored on the first play of the fourth quarter on a 14-yard pass from Thomas to Joshua Hopkins but the Tigers would get no closer.

Speaking on The Three Tailgaters Show on WGSO 990 AM Saturday morning, Karr coach Brice Brown reflected on the win over Neville.

“I think out and we executed well,” Brown said. “We knew it was going to start raining at 9 pm and we wanted to get a two touchdown lead before that happened and we were able to do so. We really leaned on our run game. We changed and adjusted. The biggest surprise was how well our defense played against a big, well coached Neville team.”

The Cougars have what every team strives for on the other side of the ball.

“We have balance on offense,” Brown said. “For the most part, we do what we do and take what the defense gives us. It starts with great quarterback play. Leonard has taken care of the ball. He gets his pre-snap reads very well. We play fast and he has everything to do with that. We always want to run the ball well.”

Karr has now won 25 straight games and will be in search of a third straight state title next Saturday at 3:30 p.m. in Class 4A state title game against district 9-4A rival Warren Easton. The second-seeded Eagles trounced previously unbeaten and sixth-seeded Leesville 54-14. 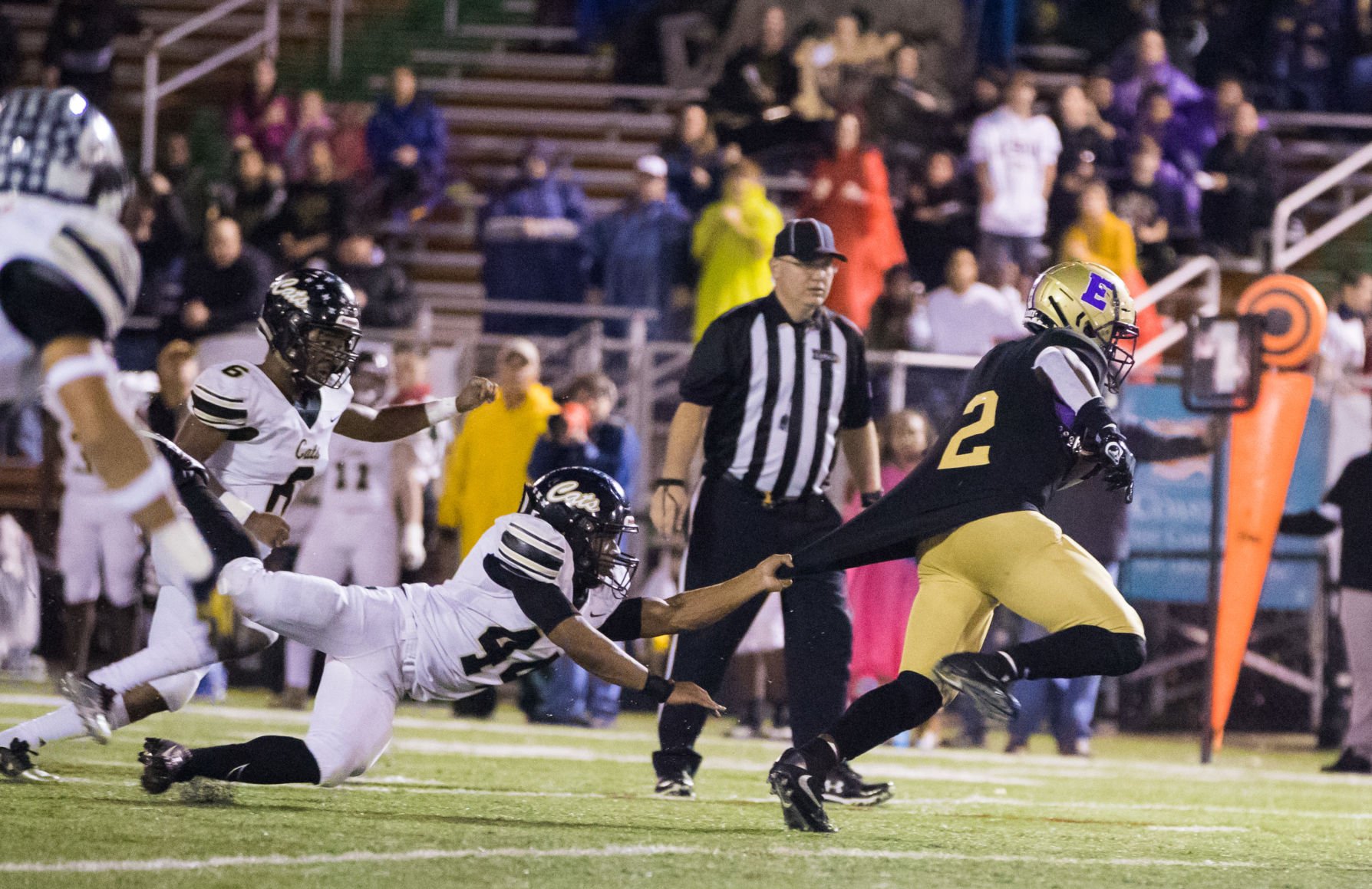 After seeing their season come to an end in the semifinals for three consecutive years, Warren Easton emphatically brought that streak to an end Friday night.

Karr edged Warren Easton 21-20 on Nov. 1 at Behrman Stadium. This time, the two will square off for the championship in the Mercedes-Benz Superdome. There are no secrets on either side. It will mark the fourth meeting in two years for the two rivals.

“We didn’t have a chance to look ahead,” Brown said. “We played a really good Bastrop team and we had to beat Neville. We kind of knew this game was going to happen after the regular season. The City of New Orleans will be well represented in the state championship game on Saturday. We cannot let emotion win the game, we have to let passion win it.”

Karr has won the last four meetings with Easton. The last victory for the Eagles over the Cougars was 40-14 in 2014 when Warren Easton reached the state championship game, falling 28-27 to Neville.

Saturday’s matchup will be the latest in the rivalry of elite football programs and outstanding public schools in the New Orleans area. Brown reflects on what he took away from the first meeting.

“For us, Easton had two big, long runs on us that were touchdowns,” Brown said. “Offensively, we were in the red zone six times and only scored three times. We have to clean that up, tweak things.

Karr will attempt to become just the 15th team in Louisiana history to win three consecutive state championships, just the ninth school do so on the field and the first since Evangel Christian (officially) did so from 2004-06. The Cougars will be making an amazing eighth appearance in the championship game in the last nine seasons.

“It has been quite a run,” Brown said. “We don’t take this lightly or the chance to win another title lightly.”