When you are facing an exceptional player, the most basic premise is to try to take that player out of the game through your game.

Karr senior wide receiver Aaron Anderson is that player, perhaps the best player in Louisiana if not one of the best in the country. The country got a chance to see that Friday night.

An LSU commit, Anderson had a brilliant junior season.

Based on what we saw Friday night, Anderson is poised for a spectacular senior season. That was on full display at Tad Gormley Stadium.

Anderson returned a kickoff, a punt and a free kick for touchdowns which proved to be the difference in a 33-19 win over John Curtis Christian in a game shown on ESPN2. In all, he returned the kickoff 90 yards, the punt 88 yards and the free kick 60 yards.

“The biggest part of the game was playing,” Brown said. “I don’t think there were winners or losers. We didn’t play a jamboree. It was our first time with live special teams, live tackling. Coach J.T. Curtis said the same thing. It was about the kids. We owed it to the seniors on both teams to get on the field and give them a sense of normalcy, that they can enjoy their high school lives and over circumstances.”

For two teams playing for the first time, the quality of play was good.

“That speaks to the level of coaching,” Brown said. “Both staffs were really into the game. Coach J.T.’s guys coaching it up, my guys coaching it up. The kids executed. It was a great crowd for a 6 p.m. game. The play was spectacular. If we played again in week 10, that game would be even better. Both teams have great depth.”

Brown cannot hide his admiration and praise for Anderson.

“I’m available to take all the calls on Aaron,” Brown said. “They actually kicked the first punt away from him. Aaron got a good hop and the wall was set up very well. We knew special teams would be a key. I talked to Coach Ed Orgeron this morning. I told him Aaron is definitely the best athlete in the country.

“I hope people across the country saw that last night. Yes, he is talented in the return game but he is a phenomenal athlete in space on offense. He’s definitely the best athlete in America.”

Anderson is a four-year starter for the Cougars.

“I mess with him all the time, telling him he’s got to tired of being here,” Brown said.
“He said he is not. To see his growth as a player and a person, it makes you happy. It has been great to see his maturation in both capacities.” 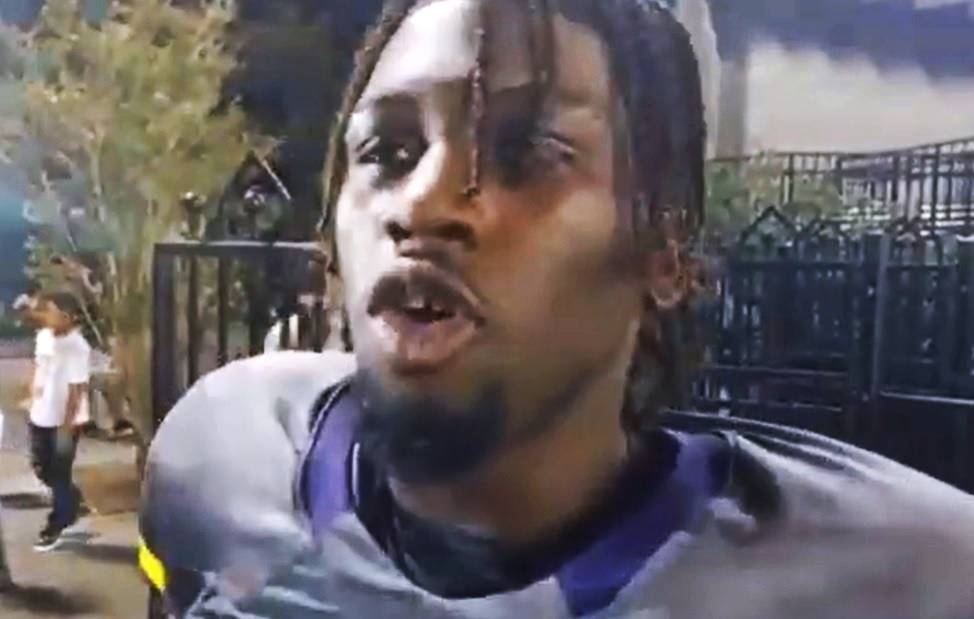 Anderson, the LSU commit, dazzled in front a national Tv audience with three kick return touchdowns to lead the Cougars past the Patriots at Tad Gormley.

Standout quarterback A.J. Samuel had an offseason injury and split time Friday night with senior Khamani Simmons. Samuel ran for a score and passed for a touchdown to Yarun McMath.

“I was excited to see A.J. out there playing,” Brown said. “Khamani went out and executed well in his place. It speaks to the level of talent we have.”

Karr had won four straight Class 4A state championships prior to losing to Carencro in the championship game at Natchitoches last December.

“We rarely talk about last year,” Brown said. “Sometimes, you need a taste of your own medicine. They wanted it more than us. We talked about it after the game and in the offseason. We accepted it and it’s up to us to correct it. That’s what we’re doing. We’re not about revenge, we’re just about reclaim.”

Beating Karr this year is going to even more difficult now.

Terrebonne star Jailyn Lucas has transferred from Terrebonne to Karr. Lucas is a standout receiver who is a Tulane commit.

“His family was displaced by Hurricane Ida,” Brown said. “They have no power, have a hold in the roof and mold. He is going to be an early graduate and go to Tulane. The family’s main focus was academics, not focusing on football and college. His sole purpose was to get back in school. He was out of school four weeks. He is a really good young man.”

The Cougars will host Scotlandville next Friday.

“Scotlandville is talented, with a good running back,” Brown said. “We’re not sure where we will play. There are still some issues with Behrman Stadium. We are happy to be playing again and helping young men grow out of difficult circumstances into men. God has his plan and we’re just pawns on his chess board,” Brown said. “It’s all about God’s grace that this is happening.”