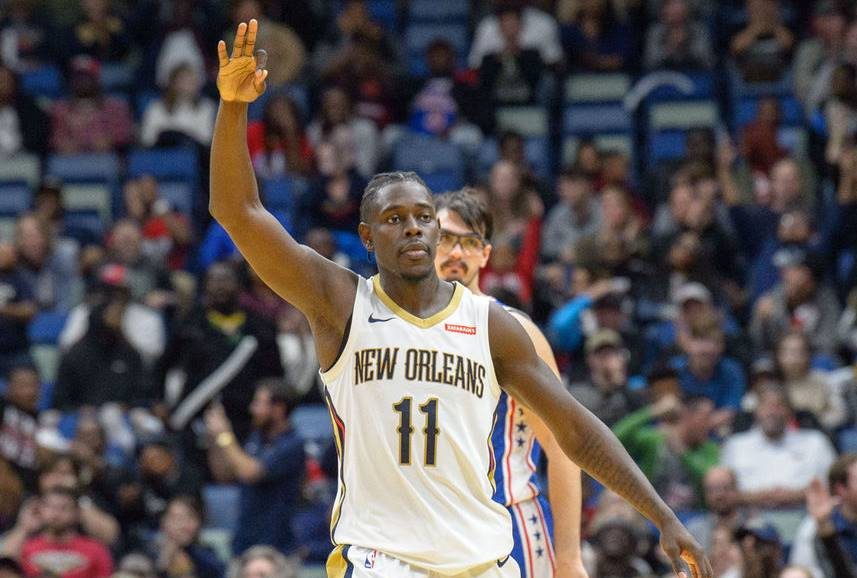 The solid era of Jrue Holiday in New Orleans is over, and it will be remembered fondly.

Holiday was dealt by the Pelicans to Milwaukee for Eric Bledsoe, George Hill, three first round draft picks and two potential pick swaps in a trade that leaked late Monday.

At first glance, it is a good move for both franchises.

The Bucks had to make a splash – a big one – to convince superstar Giannis Antetokounmpo content to stay in Milwaukee.

The Pelicans had to clear minutes for a bevy of guards with talent to develop while turning the team over to Lonzo Ball.

Bledsoe is a solid defender who is entering his 12th season in the league. Bledsoe turns 31 on Dec. 9. The Pelicans are the fourth team in his career.

Bledsoe averages 14.2 points per game for his career, along with 4.8 assists and 4.0 rebounds. He shoots at just a 33.6 percent clip from 3-point range and he is not the penetrator that Lonzo Ball is. His 14.9 point average was the lowest since the 2013-14 season.

With the presence of Nickeil Alexander-Walker (and Frank Jackson), one wonders if Bledsoe will make it to the starting gate for New Orleans. He may be packaged in yet another deal.

Bledsoe is under contract for three more years.

Hill is even longer in the tooth, entering his 13th season in the league. Hill is 34. The Pelicans are the seventh team in his career.

In his career, Hill has averaged 11.1 points per game. Hill has two years left on his deal.

The guess is that at least one of the veteran players will not be part of the Pelicans in the 2020-2021 season. It is possible that neither player will be.

What was key is the acquisition of the draft picks.

Reports have the Pelicans getting the 24th overall pick in tomorrow’s draft as one of not one, not two but three future first-round picks from the Bucks. The Pelicans will now have the 13th and 24th picks overall in the draft Wednesday. New Orleans also has three second round picks at No. 39, No. 42 and No. 60, respectively.

David Griffin and Stan Van Gundy are all in on building and growing a young team into a legitimate NBA title contender. It is possible that JJ Redick may be the only true long-term veteran on the roster when the upcoming season commences.

Williamson and Brandon Ingram will continue to be the starts and will be expected to take on more responsibility and more leadership roles. Alexander-Walker and Jackson will likely get more minutes. Josh Hart will continue to be counted on as the Energizer Bunny off the bench.

Jaxson Hayes will get more minutes and he must continue to grow physically and as a player with his enormous athletic ability. Nicolo Melli and a returning Darius Miller will be counted on as stretch forwards with their perimeter shooting.

In the end, New Orleans could well end up with the youngest roster in the league. The status of Derrick Favors, an unrestricted free agent, is yet to be determined.

New Orleans could look to flip Bledsoe or Hill, even a draft pick to try to upgrade over Favors, a solid veteran who has limitations. New Orleans would love more of a back-end rim protector and even a center who can score a little.

In all, the Pelicans now have 12 first-round picks in the next six years. That provides an excellent foundation to build with and to use as collateral in other deals to improve the roster.

The concern is losing the defensive presence of Holiday, one of the league’s very best perimeter and best overall defenders. Subtract from a team that otherwise played little or no defense and that creates a concern, though Van Gundy will clearly demand much, much more from his young nucleus on the defensive end at the risk of losing playing time.

Meanwhile, New Orleans owes Holiday a debt of gratitude for playing hard, all the time, and providing consistency on and off the court. Holiday is a class act and deserves a chance to compete for an NBA title, which he will most certainly have a shot at doing in Milwaukee. That shot in New Orleans was not likely to materialize yet with such a young team.

In summation, the deal makes sense for a young, growing team with a relatively new front office and a new coach. As I have stated for years now, small market teams should build on the model of the draft, locking up young players, growing them together to become a contender.

Star players continue to gravitate to each other with larger market squads. We have seen this for more than a decade now in Boston, Miami, Golden State Los Angeles (both teams) and Brooklyn.
The teams in New Orleans, Oklahoma City, Minneapolis, Milwaukee, Memphis, Salt Lake City, Indianapolis, Charlotte and others have to find ways to compete.

After many years of taking the opposite, largely failed approach, New Orleans has finally bought in and it could well pay off down the road. The question is, how soon?