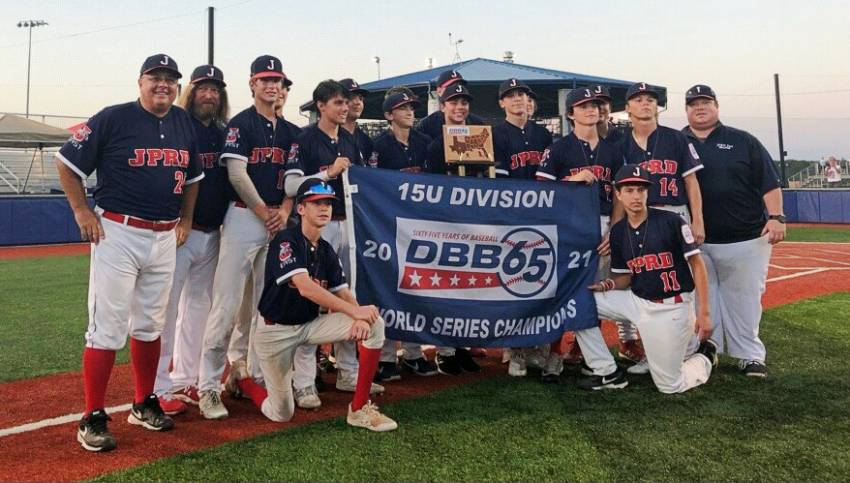 Coach Bobby Ledoux’s 15-year-olds swept the Louisiana state tournament to qualify for the World Series in Sterlington by defeating, Kentwood, JPRD West, Mangham and DeRidder by a combined score of 51-4. Their accomplishment was especially noteworthy since Ledoux’s team of all-stars from the JPRD Eastbank playgrounds had only two and one-half weeks to prepare for tournament play.

JPRD East was one of 17 teams, representing nine states, in the World Series tournament. The brackets were comprised of four pools of teams. JPRD defeated Dickson, Tennessee; Lake Marion, South Carolina; and Spring Hill, Florida, in its pool play. Ledoux said he was particularly proud of his team’s pitching and defense throughout the tournament, calling it “a total team effort.” Avery Williams, Shane Hirstius, and Brock Bullinger hurled complete games in sweeping their pool opponents. In one of the closer games of the tournament for JPRD East, they had to score in the top of the seventh inning to take a 3-2 lead against a difficult Spring Hill team.

Ledoux’s charges defeated Ruston in the semi-final, 9-5, and then Alabama All-Stars for the championship, 9-2. Matthew Dufrene and Mason Scholl were other pitchers who helped JPRD East hold opponents to only 12 total runs in the team’s five games.

Ledoux said the team got solid batting from Scholl, Bullinger, and Hirstius, who delivered timely extra base hits. Evan Bourque led the team in RBIs, while Daniel Schexnaildre produced key hits in a number of crucial situations.

Ledoux had high praise for his coaching assistants Bobby Boesch, Devin Duke, and Dave Vienne, who are veterans of the recreation department program. They have been with Ledoux for three years in all-star competition. Frankie Timphony, a current college player who is a product of JRPD, also helped the staff this summer.

These sixteen players came from eight different high schools, including Brother Martin, John Curtis Christian, De La Salle, Haynes, Holy Cross, Jesuit, Rummel and St. Martin’s. While many of the players also play in other summer leagues, Ledoux said, “These players look forward to playing at their local playgrounds, because we emphasize ‘team’ wins over individual performance.” He added, “The kids learn what it takes to win and then they want it badly.”

It turns out a number of the team members had been runners-up in prior years’ State and World Series tournaments as 12, 13, and 14-year-olds. Ledoux said the squad was easy to coach because the players had an internal motivation and drive to finally get a championship under their belts.

Ledoux added, “We take great pride in our youth playground programs. We continue to use the model of local recreation department leagues and all-star teams that go on to compete in tournament play.” He added, “We are able to get highly-skilled high school players who want to play for the rec departments.”

And he gets good results. Ledoux’s JPRD East 15U team also won the DBB World Series tournament in 2019.