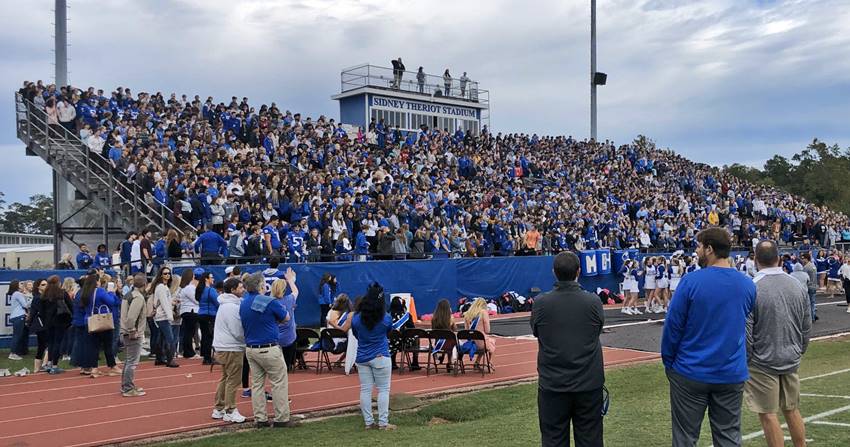 Mandeville has been a solid football program for many years, most recently under Guy Lecompte, who took the Skippers to the semifinals multiple times and under Hutch Gonzales.

Now the Skippers are entrusted to the steady, solid guidance of Craig Jones, who built an outstanding program at Lakeshore, fashioning an impressive 71-35 record. Jones took the Titans to the Class 4A state championship game in 2017.

Jones hopes to replicate that success at Mandeville.

Mandeville had a disappointing 3-6 record a year ago, a blip on the radar screen of an otherwise successful program.

There are many key players to replace who graduated, including Landon Ibieta, now at LSU, along with quarterback Rex Henderson.

There are just three players returning with any significant playing time on offense from a year ago. That includes just two returning starters, both offensive linemen in senior Kaleb Culotta and junior Cole Beecher (6-4, 270).

They will be joined by seniors Spencer Davis (5-10, 235), Dylan Ivy and Brody Head, along with sophomore Reagan Touchstone.

The other wide receivers who will play include seniors Brendan Scardino and Logan Reese, along with juniors Blake Guidry and Tasmin Showers and sophomore Michael White.

The defense is more experienced, with five returning starters.

They include two linemen in seniors Kai Dean (6-1, 250) and Clarence Joseph III (5-11, 245). The others set to play include senor Gavin Brackley and junior Pierce Melancon.

Returning to start at linebacker is senior Logan Reese, who is joined by seniors Knox Collura and Wyatt Powell, along with junior Jack Roberts.

The other corners will be senior Caleb Gifford, junior Elias Allen and sophomore Emil Allen (5-10, 160) while the other safeties are seniors Hayes Strawitz (5-5, 130) and Ethan Satterlee (6-1, 173), along with junior Jacob Hoffstadt.

The kicking game should be a strength with sophomore Creighton Williams as the kicker and senior Garrett Gleason handling punting duties.

The schedule opens at home against Denham Springs on September 2, followed by a tough road game at Hahnville and a home contest against Walker.

District 6-5A play begins on September 23 at Northshore, followed by home games with Slidell and Ponchatoula. After a road trip to Fontainebleau, the Skippers will entertain St. Paul’s. The schedule concludes at Hammond and at home against Covington.

With a new coach and new approach, optimism runs high at Mandeville. It will be incumbent upon a young offense to grasp a new system and mature early to determine the level of success in 2022.