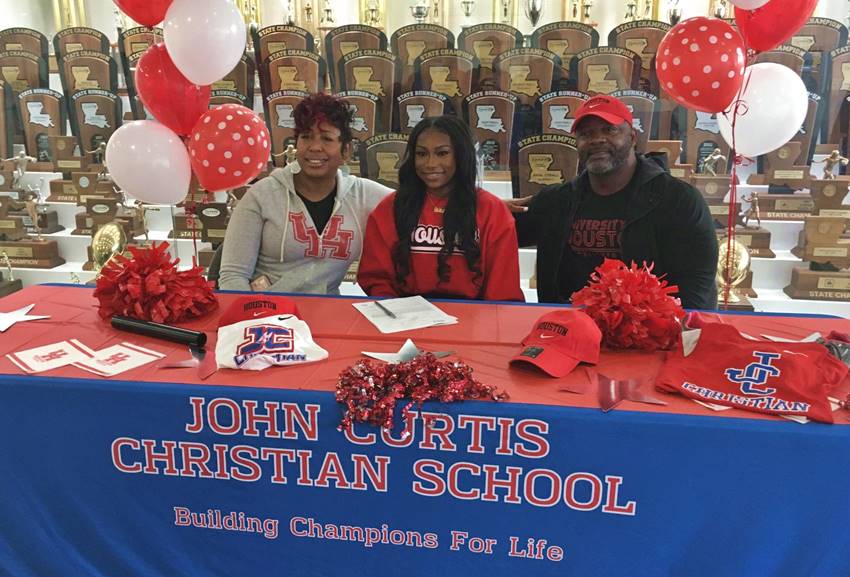 One of the very best track and field athletes in Louisiana is heading to Houston.

Nunnery ran the fastest indoor 200 meter time in the history of Louisiana.

During her 2020 indoor track campaign, Nunnery was the indoor 60 meter state champion and she also anchored the 4X400 meter indoor relay which broke an 18-year old record.

In 2019, Nunnery received the Allstate Sugar Bowl Amateur Athlete of the month award for July of that year.

“I was being recruited by a lot of different schools,” Nunnery said. “With COVID, I haven’t been able to travel to any. My top three were LSU, Houston and USC. I’ve been running at LSU for a while but I didn’t really want to be in Louisiana so I thought Houston was my best choice and the coaching staff.”

With many titles to her credit, what is Nunnery most proud of?

“I ran in nationals last summer and I won first place so I am a national champion and also I am a state champion in three disciplines. I will practice hard, work hard and run even harder at Houston and just excel as an athlete.”

Nunnery is grateful for what she has experienced at John Curtis.

“It has been great, it’s been awesome,” Nunnery said. “I’ve been working hard with the coaches. I have a 3.7 GPA, staying on top of my books. It’s just been an amazing experience.”

Patriots head coach Eric Smith could not be happier for his star athlete.

“Raven has been a great athlete,” Smith said. “She’s been dedicated. She has very great parental support. Every day, I’ve been coaching her since she was eight, and she’s had that constant smile since eight-years-old. She’s going to go a long way as long as Raven remembers her foundation here at John Curtis that we’ve laid down. That will be the blueprint through life for her to be successful.”

What is Nunnery’s best trait?

“She has very tough skin,” Smith said. “She can take corrective criticism. She soaks it up like a sponge and puts it out in a positive manner. She’s going to go a long way in the sport. I will have her for a little while longer. Committing takes a lot of pressure off her, signing early.”