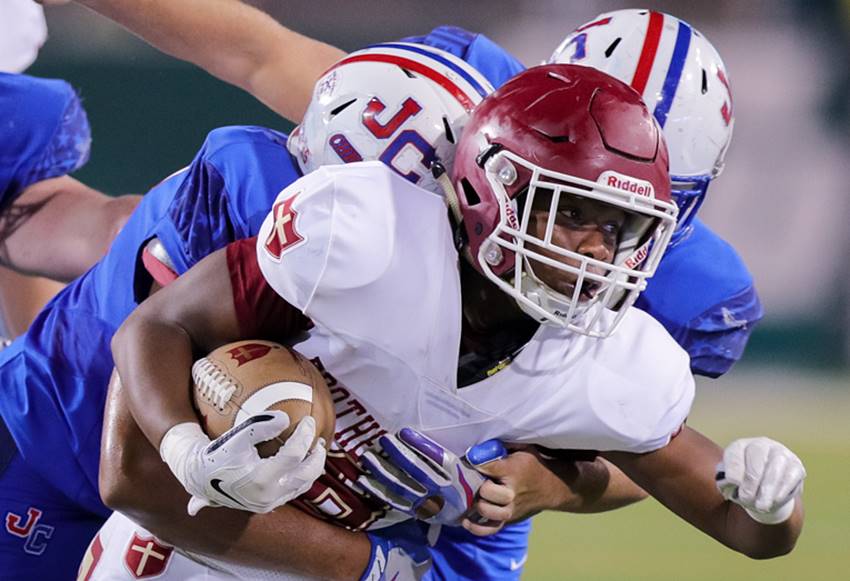 The District 9-5A title is at stake Friday night at Strawberry Stadium in Hammond when John Curtis Christian and Brother Martin meet in a game that will be broadcast live by Cox Sports Television and Crescent City Sports.

Coverage begins at 7 p.m. CT, with Ken Berthelot and Wayde Keiser describing the action. It will air live on CST and will stream live at CrescentCitySports.com. A re-broadcast of the game will air on CST at 4 p.m. Sunday as well as on-demand on CCS.

Brother Martin (6-0, 3-0) is not only the top-ranked team in the Crescent City Sports and Louisiana Sports Writers Association Class 5A rankings, but sits at No. 1 in the latest unofficial LHSAA power rankings in Division I. John Curtis (4-3, 3-1) – whose losses this season are all to defending state champions – is ranked sixth in Class 5A by the LSWA and ninth by Crescent City Sports.

A victory by the Crusaders would give the program the outright Catholic League title, its first since 2008. A Patriots win would throw the top of the standings into a logjam, with as many as four teams potentially finishing with one district loss depending on the results of the other league games this weekend.

Brother Martin features a balanced offense that averages nearly 470 yards per game. Junior quarterback Garrett Mmahat has spread it around to a stable of running backs, which has had four different 100-yard rushers this season, and a receiving corps led by junior wide receiver Austin Jackson.

Junior quarterback Buddy Taylor is in his first year operating the John Curtis option-based Veer offense, and his 601 yards rushing are the most in the district.

In addition to its television partnership with CST, Crescent City Sports will also feature free live streaming of no fewer than 30 high school sporting events on its website throughout the 2020-21 school year.