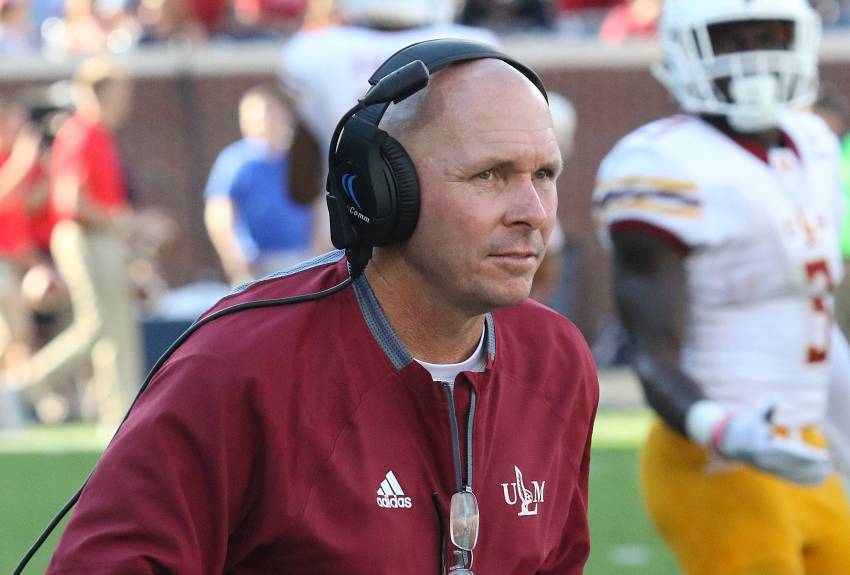 “It’s exciting to welcome John Carr and his family back home,” Bowden said. “John has coached football at every level – from high school to junior college to NCAA FBS – and he’s experienced success at every step along the way. I really enjoyed meeting with John during the interview process because he possesses a wealth of knowledge. He also has an established working relationship with our new offensive coordinator Matt Kubik, which is a definite plus. John also has spent the last four years coaching in the Sun Belt Conference and that familiarity is important too.

“He will also be a tremendous asset when it comes to recruiting, especially in both Louisiana and Mississippi, where he already has established relationships with a great number of high school coaches.”

Prior to the 2021 season, Troy head coach Chip Lindsey added the title of passing game coordinator to Carr’s responsibilities. The Trojans finished third in the Sun Belt Conference in completion percentage (.632) and fifth in passing yards per game (238.7).

In 2021, Carr also tutored All-Sun Belt Third-Team wide receiver Tez Johnson, who had 67 receptions for 735 yards and four touchdowns. Johnson ranked second in the league in receptions per game (5.58) and seventh in receiving yards per game (61.3).

During Carr’s first season at Troy, his receivers combined to produce 11 100-yard receiving games in 2019, shattering the school’s previous single-season record of seven.

Prior to making the intra-conference move to Troy, Carr spent the 2018 season as wide receivers coach and recruiting coordinator at ULM under head coach Matt Viator.

In 2018, he worked with Marcus Green, who became an All-Sun Belt First-Team selection as both a wide receiver and all-purpose player as well as one of finalists for the Paul Hornung Award, presented to college football’s most versatile player. As a fifth-year senior, Green led the team in receptions (50), receiving yards (855), touchdown receptions (8) and all-purpose yards (1,518). He ranked among the Sun Belt leaders in TD receptions (tied for second), receiving yards per game (tied for third at 71.2) and receptions (seventh at 4.2 per game). Green, who was selected by the Atlanta Falcons in the sixth round of the 2019 National Football League Draft, made his Canadian Football League debut in 2021 with the Hamilton Tiger-Cats.

“I’m extremely excited to have this opportunity to work with Coach Bowden and build upon the momentum he created in his first year leading the ULM program,” Carr said. “Obviously, it’s a homecoming of sorts for me because I’m so familiar with the area already and have so many family and friends here. I’m looking forward to getting started and helping Coach Bowden build something special here at ULM.

“I’m excited to be reunited with (ULM offensive coordinator) Matt Kubik. We’ve been friends for a long time and have very similar offensive philosophies. We had a great run here in 2018, and we’re both thrilled to get back to Monroe. Again, we’re looking forward to adding to the excitement Coach Bowden generated in this community and all of Northeast Louisiana last year. From my perspective from across the Sun Belt East Division, Coach Bowden did an incredible job in his first year at ULM.

“There are a number of players on the current roster that were around when I left after the 2018 season,” Carr continued. “I’m looking forward to working with those players again. I can’t tell you how many former ULM players or how many area high school coaches have reached out to me. It makes you feel good that so many people are excited about you coming back and rejoining the coaching staff. I’m so thankful for Coach Bowden and the administration for providing me with this opportunity and for bringing me back on board. I’m energized being back on the ULM campus and I know exciting times are ahead for this football program. I’m ready to roll up my sleeves and go to work.”

Like Bowden, Carr believes his knowledge and familiarity with the Sun Belt is an advantage.

“The Sun Belt has clearly established itself as an elite Group of Five Conference, and the league has only strengthened itself with the recent additions (Southern Miss, Marshall, Old Dominion and James Madison),” Carr said. “From top to bottom, there’s great parity in the Sun Belt, and now, the conference has earned respect throughout the country. There’s no question that more fun and exciting days are ahead for both our league and the ULM football program.”

Before beginning his first stint at ULM, Carr worked for two seasons under Steve Buckley as the assistant head coach and offensive coordinator at Jones College (formerly Jones County Junior College) in Ellisville, Mississippi. In addition to his play-calling responsibilities, he also coached the quarterbacks, wide receivers and tight ends while helping the Bobcats to a combined record of 14-5 (.737).

Carr previously worked for three years as the director of football operations for Todd Monken at Southern Miss (2013-15) where he managed team travel, event operations, fundraising projects, clinics and camps.

From 2005-12, Carr served as head coach at Ouachita Parish High School where he compiled a 72-28 record (.720) in eight seasons. In his first year, he led the Lions to the Class 4A semifinals. His teams advanced to the state quarterfinals on three occasions (2006: Class 4A, 2008: Class 5A and 2012: Class 5A). During his tenure, more than 30 of his student-athletes signed scholarship offers with collegiate programs.

Prior to becoming head coach at Ouachita Parish, Carr spent the 2004 season as the offensive coordinator and quarterbacks coach for his father Roger at East Mississippi Community College. In addition to his coaching duties, he wore many hats, acting as the program’s sports information director, financial aid director and academic advisor.

“I entered this profession as a high school football coach,” Carr said. “Many of my friends are still coaching in the Louisiana high school ranks or have taken administrative roles at high schools in this part of the state. I look forward to getting back into the community as well as on the road to see some familiar faces and rekindle those relationships.”

The Ruston, Louisiana, native played for legendary coach Chick Childress at Ruston High School. Carr became a three-year letterman (1993-95) as a wide receiver for head coach Joe Peace at Louisiana Tech. He received a Bachelor of Science in health and physical education from Louisiana Tech in 1996 and earned a Master of Education in administration and supervision from ULM in 2001.

Carr is married to the former Paige Hammonds and the couple has two daughters: Anna and Emma.

In addition to announcing Carr’s hiring, Bowden announced Tony Hull will transition from coaching the Warhawks’ outside receivers in 2021 to running backs in 2022.

Hull, a native of New Orleans, previously spent four years as the associate head coach and running backs coach at Kansas from 2016-19 where he coached Pooka Williams Jr., now with the Cincinnati Bengals, to consecutive 1,000-yard rushing seasons in 2018 and 2019, a feat accomplished only once before in Kansas football history.

As a Jayhawk, Williams earned second-team All-America and first-team Freshman All-America honors in 2018, compiling a total of 1,125 yards, eighth best in KU single-season history, and ranking sixth in NCAA Football Bowl Subdivision with 150.9 all-purpose yards per game. The Big 12 Offensive Freshman of the Year, Williams led the Big 12 in kick returns and his 1,660 all-purpose yards rank third on the Wildcat single-season list.

While Williams’ exceptional freshman performance ranked among the best in KU football history, he ran for 1,061 yards in his sophomore season in 2019 to pick up All-Big 12 first-team accolades in back-to-back years. Williams became the first KU offensive player to garner first-team honors since Kansas joined the Big 12 and only the second Jayhawk ever to earn first-team recognition in back-to-back seasons.

Under Hull’s guidance, KU running back Khalil Herbert, drafted in 2021 by the Chicago Bears, exploded for a 291-yard rushing game against West Virginia – the third-best single-game rushing performance in Jayhawk history and third best in the NCAA in 2017.

“That is the position Tony Hull coached at Kansas and it will be a natural transition back,” Bowden said. “And, it allows John to work with the wide receivers where he previously coached. Tony’s resume speaks for itself. Under his direction at Kansas, Pooka Williams and others flourished at running back. He also can become a difference maker in that role here at ULM.”