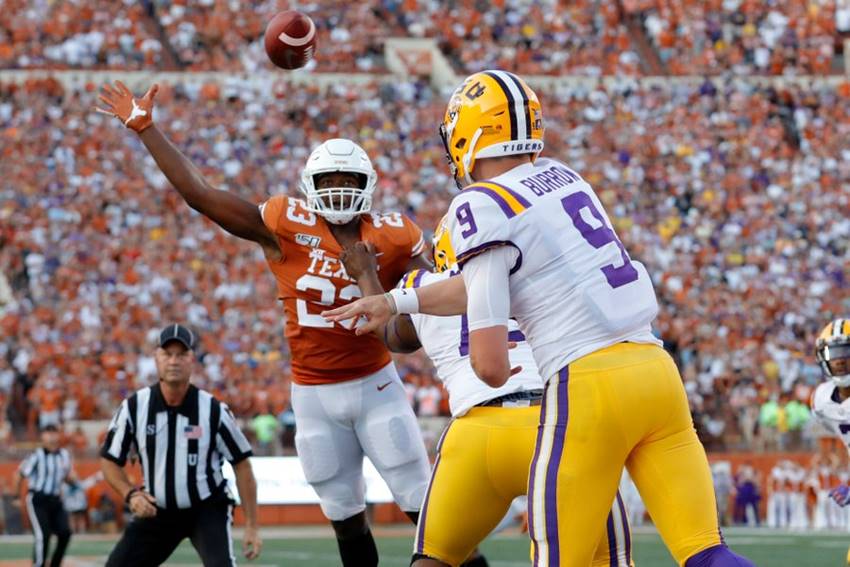 On Monday, Burrow was named the SEC Offensive Player of the Week and yesterday, he was selected by the Maxwell Award as its national player of the week.

In LSU’s win over No. 9 Texas on Saturday, Burrow set three career-highs in the victory – passing yards (471), completions (31) and total offense (479). The 471 passing yards and 479 total yards rank No. 2 in school history, while the 31 completions stand as the third-highest total in LSU history.

The win over the Longhorns marked the first Top 10 victory over a non-conference opponent in a true road game in LSU history.

Burrow and the Tigers iced the game late in the fourth quarter when he connected with Justin Jefferson on a 61-yard touchdown pass that extended LSU’s lead to 45-31 with 2:21 to play. Burrow threw a total of three TD passes to Jefferson with the other two covering 6 and 21 yards in the first half. Burrow added a fourth TD pass to Terrace Marshall Jr. in the fourth quarter.

Burrow and the Tigers return to action on Saturday at 6:30 p.m. when they host Northwestern State in Tiger Stadium. Tickets for the game are still available and can be purchased at www.LSUtix.net.

The Davey O’Brien Award is named for the former TCU quarterback, who in 1938, became the first player to win the Heisman Trophy, Maxwell Award and Walter Camp Award in the same year. He was inducted into the College Football Hall of Fame in 1955.

O’Brien was drafted fourth overall in the 1939 NFL Draft and earned Pro Bowl honors in his rookie season after setting a National Football League record for season passing yardage. The NFL’s highest-paid player retired after the 1940 season to become an FBI agent.

The Davey O’Brien Foundation was created in 1977, and the National Quarterback Award, the oldest and most prestigious college quarterback award, was first issued in 1981. The Davey O’Brien Fan Vote, now in its 13th year, gives fans a chance to play a role in determining the award winner. Fans may vote daily for their favorite quarterback at www.VoteOBrien.org.

Since 1977, the Davey O’Brien Foundation has given away more than $1 million in scholarships and university grants to help high school and college athletes transform leadership on the field into leadership in life. For more information, visit www.DaveyOBrien.org.