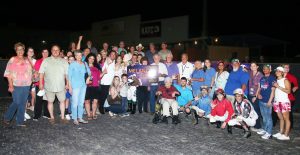 Veteran Thoroughbred jockey Gerard Melancon joined an exclusive group by winning the 5,000th race of his career aboard Reposato in Thursday night’s eighth race at Evangeline Downs in Opelousas.

“I have to thank my wife, Annette, for all of her support through the years. Manuel Robin was integral in giving me a chance to get started, and my agent Louis Coco has been a great partner for the past 25 years,” said Melancon.

Of the select group of jockeys with 5,000 wins, seven were born in Louisiana – and all of them are from the Acadiana region.

Melancon has ridden multiple graded stakes winners in his career, most notably Bonapaw, the talented sprinter who won the Grade I Vosburgh at Belmont Park in September 2002 for New Orleans-based owners James and Dennis Richard. Bonapaw won more than $1.1 million in his career.

In 2004, Melancon earned his biggest win in his home state in 2004 by booting home Fantasticat in the Grade II Super Derby.