Jim Taylor a treasure for Louisiana

Jim Taylor was a Louisiana legend from Istrouma and LSU. He was a Green Bay Packer and NFL legend. He provided name recognition and helped boost attendance for the expansion New Orleans Saints in 1967.

I was fortunate to have Taylor appear at the Saints Hall of Fame Museum in 2017.

He came with his beloved wife, Helen, and could not have been more gracious.

Taylor embraced the love and attention of LSU fans and even Saints fans while wearing his Pro Football Hall of Fame jacket, which he cherished.

When I was a child, Taylor debuted with the Saints.

I will never forget the roar of the crowd when he was the final player introduced at the first regular season game against the Los Angeles Rams on Sept. 17, 1967.

In retrospect, it severely cramped the style and opportunity for NFL Hall of Fame player and Saints head coach Tom Fears.

You do not build an expansion team on the heels of aging veterans who have short-term life expectancy.

Still, with the expansion draft and other measures, the Saints went all in on the likes of Taylor, his Packer teammate Paul Hornung, Dave Whitsell and Doug Atkins, among others.

Hornung never played a down for the Saints.

Whitsell and Atkins, who were stars with the Bears, remained stars with the Saints. Whitsell led the NFL with 10 interceptions in 1967 and was the first Pro Bowl player in franchise history. Atkins was still a massive force, torturing tackles in front of him and opposing quarterbacks. Both would eventually make it into the Saints Hall of Fame.

There were others as well.

While his competitive nature kept him in the game after the 1967 season, he never made it to the 1968 regular season. When it was clear that he did not fit in with the approach Fears wanted to take, Taylor walked away in the preseason of 1968.

He would eventually land a front office position under Mecom and also worked on Saints radio broadcasts. He was a Louisiana and a fixture.

Taylor went away for a while and we did not see him. Then, he returned as the Saints celebrated their 50th anniversary and we were blessed to bring back 17 members of the very first Saints team in 1967. Taylor embraced the opportunity, embraced his teammates and loved it.

Then, we brought him back last year to the museum. He loved it, we loved it.

I spoke with Jim this past summer, trying to get him to come to our Saints Hall of Fame events in Biloxi. He was unable to attend but was very regretful. What a shame that he could not attend.

While I was too young to see him play at LSU, I will always treasure the memories of Taylor running over tacklers as a Packer, running out of the tunnel for the Saints and appearing at the Saints Hall of Fame Museum in the classiest fashion imaginable. He was and will remain a treasure for our state. 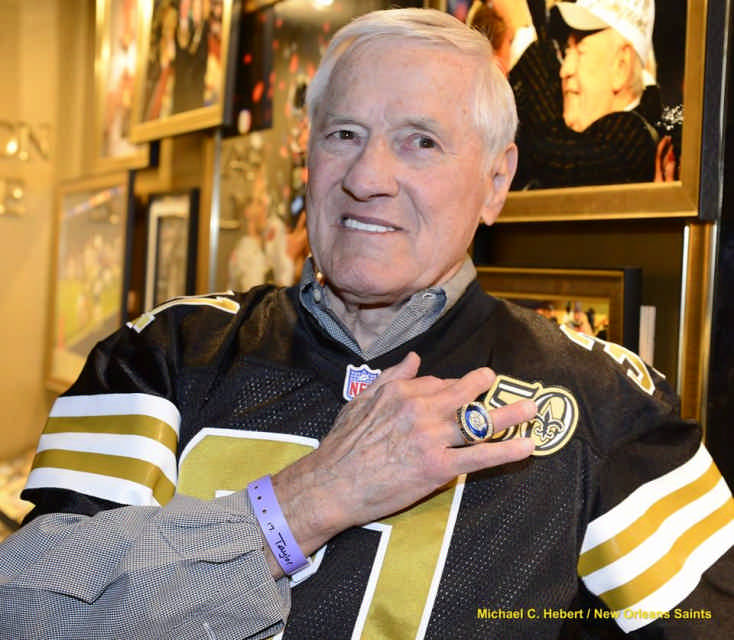