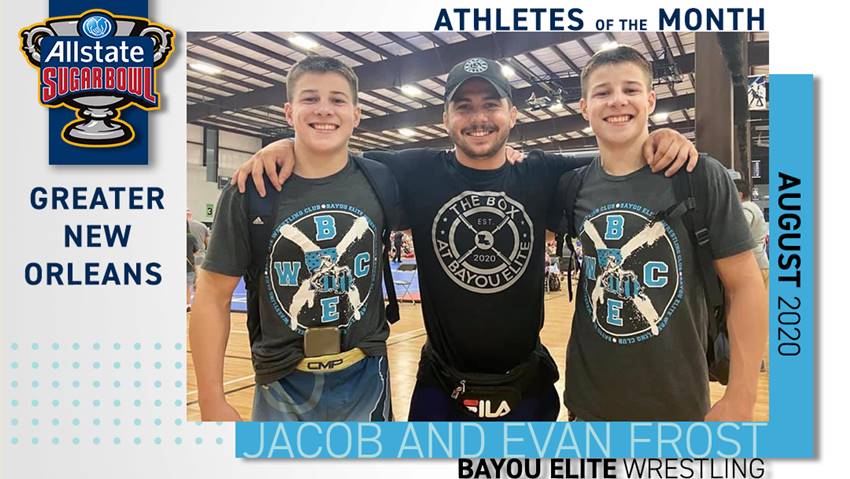 NEW ORLEANS – Jacob and Evan Frost, twin wrestlers for Bayou Elite Wrestling Club, have been selected as the Greater New Orleans Amateur Athletes of the Month for August after sharing the 125-pound championship at the Reno World Wrestling Championships. Monthly award-winners are selected by the Greater New Orleans Sports Awards Committee, sponsored by the Allstate Sugar Bowl.

The Frost brothers, 15-year old twins who are juniors at Holy Cross, had outstanding summers with Bayou Elite Wrestling. In August, the twins were crowded as the 125-pound champs at the Reno World Wrestling Championships (held in Tulsa this year due to COVID-19). The pair won their semifinal matches on August 1 and as they would have been facing off against each other, they were declared co-champions. The duo entered the event unranked, but Jacob beat the No. 1 seed in the quarterfinals and the No. 4 seed in the semifinals while Evan took down the No. 2 seed in the quarters and the No. 3 seed in the semis. Earlier in the summer, both won championships in their weight classes (Evan at 132 pounds and Jacob at 138 pounds) at July’s Deep South Duals in Birmingham – both posted records of 12-1 while capturing their weight-class titles. Evan was the 106-pound Division I state champion and Jacob was the 113-pound Division I state champ at the 2020 Allstate Sugar Bowl/LHSAA Wrestling Championships.

The Frosts were selected for the honor over three other nominees.

– Brady Bennett (UNO Golf), a Zachary native who is a junior with the UNO golf team, won the 2020 Baton Rouge Open at Beaver Creek by two shots with a two-round score of 138 (six under par). On day two of the event he came out hot shooting a 31 (five under par) on the front nine on his way to victory. The event, hosted by BREC Golf, was held August 15-16 at Beaver Creek Golf Course in Zachary.

– Jamel Brooks, an 11-year old with the New Orleans Metro Stars track club, registered three top-eight finishes for his age group at the AAU Junior Olympic meet in early August. Brooks finished fifth in both the 800-meter run (2:27.15) and the 1,500-meter run (5:17.23) while placing eighth in the 400-meter dash (1.04.38). The AAU Junior Olympic meet, which was held in Satellite Beach, Florida, is the top national youth meet of the summer circuit.

– Riley Hnatyshyn, a junior with the St. Paul’s golf team, shot a 3-under 141 to win a Louisiana Junior Golf Tour tournament in Choudrant at Squire Creek Country Club the weekend of Aug. 16. He opened with a 4-under 68 on the 6,600-yard, par-72 course to take a three-shot lead. He wrapped up the two-round tournament with a 73 the next day. In the final round, Hnatyshyn birdied the 11th hole, bogeyed two others and shot par on the other 15 holes. It was his second victory of the season, as he also captured the LJGT tournament at Chateau in Kenner in June.