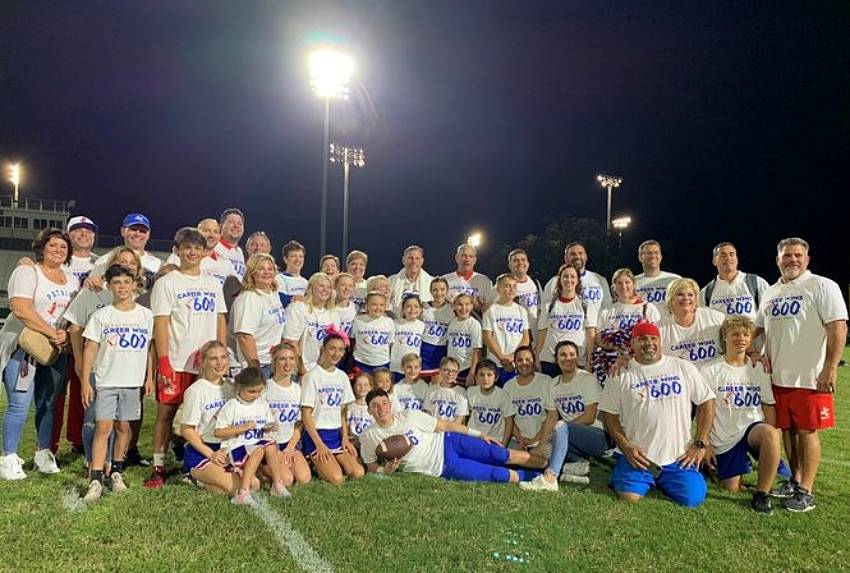 John T. Curtis Sr. was a man of faith, a strong believer in Jesus Christ who pastored a church and passed that faith down to his children.

In 1962, Curtis felt called to create a Christian school option in Jefferson Parish.

It was a leap of faith, taking a chance that if he built it, people would come.

The dream of Curtis Sr. became a reality.

Soon after, the Field of Dreams for the Curtis family was born and would become a reality, with many, many dreams realized.

John T. Curtis Jr. is a man of faith, a strong believer in Jesus Christ who has continued to pastor the church his father presided over and he has passed that faith down to his children.

John Curtis Christian School has grown from having 16 students on the second floor of the Carrollton Avenue Baptist Church to having a K-12 school with two campuses in River Ridge and over 800 students, on solid ground.

To say the football program is on solid ground would be a vast, gross understatement.

John Curtis has been the pre-eminent program in the state, winning 27 state championships (26 officially) on the field under the man known as “J.T.”

When you consider that in his first year establishing the program, Curtis, at the ripe young age of 22, presided over a winless team in 1969, it is amazing to see what the program has become.

It took J.T. just seven seasons to capture his first state championship, doing so in 1975, winning a 13-12 thriller over Notre Dame for the title.

Since then, there have been 13 unbeaten seasons, an unofficial national championship and a pair of 43-game win streaks.

Friday night at Joe Zimmerman Stadium in Marrero, 53 years after giving birth to his football program, Curtis amassed his 600th victory, an incredible feat, as the Patriots dominated Archbishop Shaw 37-16 in a District 9-5A contest.

On the field, Buddy Taylor ran for two touchdowns and passed for a third to Carl Wilson. Pat LeBranch and Marlon Prout each added a touchdown run. Jordan Evans returned a fumble 50 yards for a Shaw score.

The coach did not allow himself to get caught up in the importance of the moment all week long, respectfully avoiding interviews, which he is typically very warm to embrace and handle with class.

“I didn’t want the attention to be diverted because this is their team, their opportunity,” Curtis said. “I’ve always taken that approach and will always take it. I had a chance to play in high school and college. This belongs to them and the focus belongs to them, not to me. We just want to help them achieve their goals.”

The reality of the situation did not set in until the game was nearly over.

“As the game wore on and it became obvious that we were going to win, I really didn’t think about it a whole lot until they dumped the ice on me,” Curtis said. “I was so involved in the game and our preparation. We were playing some younger guys and trying to help them develop. When the ice hit me, it kind of hit me.”

In trying to weigh the tremendous accomplishments, Curtis singled out a couple of seminal moments among the triumphs in his illustrious career, picking his first-ever victory and his first-ever state championship as the most special wins.

“We lost all 10 games the first year (1969) and lost 6-0 the opening game of the second year,” Curtis said. “I was wondering if we would ever win. Getting that first one was so important. I knew we had a much better team and had to learn how to win. The first championship game victory in 1975 was special as well. Everything is temporal on earth. Spiritual things are for eternity.”

Now 74, Curtis shows no signs of running out of gas.

Most importantly, Curtis remains humble and true to the mission his father established at the school. 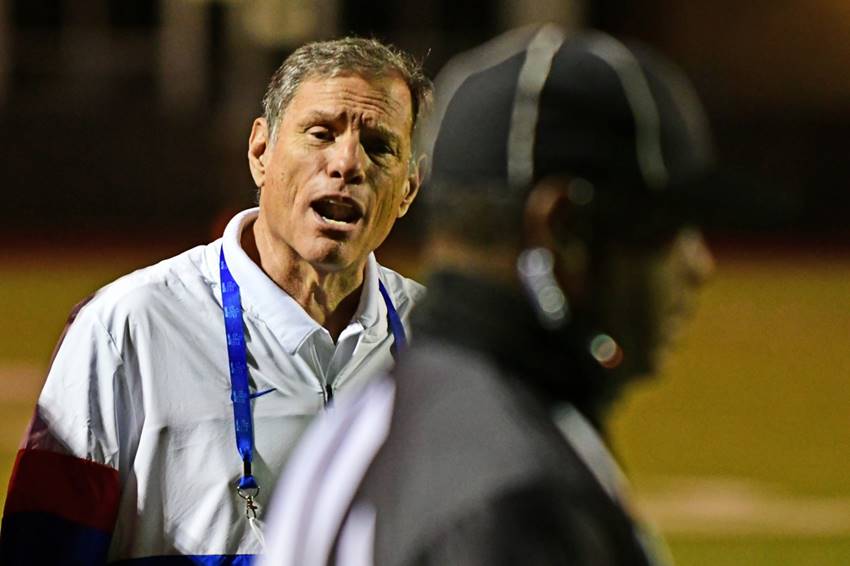 Both remind me of the late Pastor Buford Easley of Williams Blvd. Baptist Church, whom the Curtis family knew well. Many who attended Williams Blvd. went to John Curtis and many John Curtis graduation ceremonies were held at the church.

Easley was a big man, a gentle giant who was mild and meek out of the pulpit but he was a roaring lion in the pulpit and a butcher on the basketball court at the gym he built adjacent to the sanctuary, which is where worship is now taking place following damage from Hurricane Ida to the church in Kenner.

Curtis Sr. was a man whose faith defined his life and he was kind to so many. When it came to his school and athletic competition, Curtis Sr. was as fiercely competitive of a person as I have ever seen.

If you were for him, you loved him.

If you were against him, well, shedding the Christian label, you loathed him.

He glared at you with those piercing eyes. You wondered what he was thinking.

The vision of Curtis holding up the finger signaling No. 1 is vivid in my mind.

So is the chair that was there for him in the latter stages of his life on the Patriots sideline.

So does the enormous spirit of the man.

The spirit of the man is carried on through his family, including his namesake.

One other quality which defines J.T. is his accessibility and kindness.

This past week, prior to the game, the coach was not interested in talking about the inevitable, incredible, incomparable achievement of 600 wins. He preferred to focus on the task at hand, to game plan and scheme to beat an improved Shaw team.

Now, he has the accomplishment.

Now, he is talking.

Now, he is getting his just due.

Curtis Sr. left this earth at the age of 86 in May of 2005, just over three months prior to the tragedy of Hurricane Katrina. Curtis Sr. weathered the storms of life quite well.

His beloved wife, Merle, departed life at the age of 92 in March of 2020, at the beginning of the current COVID-19 pandemic. Merle was a sweet, kind person with a memorable smile.

The family affair at the school bearing his name continues with J.T., Leon, Debbie, Kathy, Alicia, Johnny, Jeff and others who have married into the family, along with their children. Lydia, Sue, Bob, Darryl and Mark are all a huge part of the family as well. Joanna was part of the school mission as well, previously.

The legacy of Curtis Sr. is secure.

The legacy of J.T. is secure, though there is another chapter to be written.

John McKissick of Summerville High in South Carolina amassed 621 victories in his illustrious career spanning 63 years at the school (1952-2014). McKissick passed away in November of 2019.

J.T. Curtis could possibly reach that mark by the end of the 2022 season, if the Patriots win out this season and have an elite season in 2022 and that is possible.

By 2023, the record seems certain to fall, God-willing, if there are no more pandemics, hurricanes or otherwise and if J.T. can remain healthy.

On Friday Night Football on WNOL, WGNO and simulcast live after the Original Prep Football Report on NASH ICON 106.1 FM, Curtis deflected credit to all of his players, coaches, family and his father. That was predictable.

At the end of the show, my great friend Ed Daniels presented Curtis with a cake, which he bought, commemorating the achievement.

It was a nice gesture.

Curtis got his cake.

My guess is he ate some of it, too!

My guess is the staff at FNF enjoyed it as well.

My guess is that Curtis then took it home to share with family members.

The school is a family.

The family deserves to celebrate in the incredible achievement.

“It was a nice win the kids played well,” Curtis said. “This is all about my family and my dad, who got his direction from God in 1962 to provide a non-sectarian school for young people to grow educationally and spiritually to introduce them to their relationship and to develop that relationship in Christ.

“It’s been a real joy to work with my three sisters and my brother and all of the family members involved in school. We work together because we love each other and our goals are exactly the same. It is all about what is in the best interest of the students and their development.”

J.T. enjoyed the evening, including his time on Friday Night Football.

Then, he awakened Saturday.

Then, there was film study and practice time as the attention quickly turned to a bunch of Blue Jays next Friday night at Hoss Memtsas Stadium.

“We’re focused on Jesuit now,” Curtis said. “All you have to do is watch them on film and you know they are good and will be a real challenge. They are well coached. They are very good.”

In the distance but audibly, J.T. likely hears the strains of “It Is Well With My Soul,” as he focuses his mind on the memory of his father.

All is well in River Ridge at John Curtis and with the Curtis family with the latest blessing. The accomplishment arrived with Amazing Grace, rather than a victory lap by J.T.

To those of us who have known him for nearly five decades, that is certainly no surprise.

As he sings his soul to his Savior, God to thee and how great thou art, Curtis should allow himself to look in the mirror at how great a coach, father and mentor he has been.

Perhaps one day, he will allow himself to do so.

Until that day comes, let us enjoy the journey in his pursuit of a cherished record and an even greater legacy.