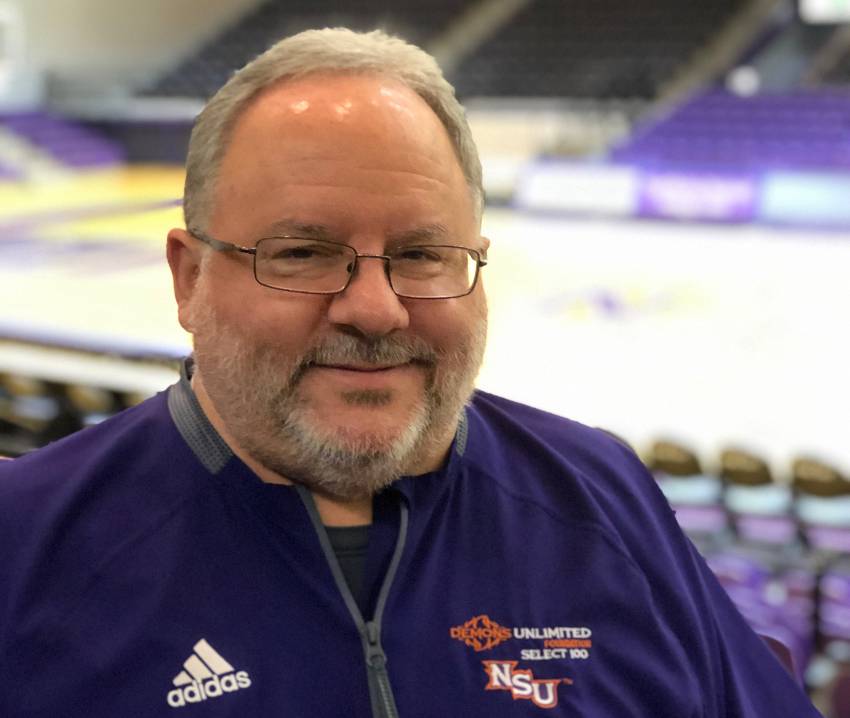 By: John Marcase
Written for the LABC

NATCHITOCHES, LA – It may be hard to fathom, but the 2022 recipient of the Louisiana Association of Basketball Coaches’ Mr. Louisiana Basketball award posted a career-high nine points during his junior high school playing career not once, but twice.

No one is sure if his scoring sprees came in regulation games, or those that went to overtime.

What Ireland may have lacked on the court, he more than made up for as an ambassador for the sport of basketball in Louisiana like few before him.

“I think the committee did a great job with his selection,” said Mike McConathy, the winningest collegiate basketball coach in Louisiana history with 682 victories. “As for this award, he fits the bill. Doug always championed basketball. He is just passionate about the game.”

The Mr. Louisiana Basketball award is the most prestigious annual award given by the LABC. It is presented annually to someone who has made a significant, long-term contribution to the game of basketball at any level in the State of Louisiana. Ireland will receive the award during the LABC’s 48th Annual Awards Banquet this Saturday, May 7, at the Baton Rouge Marriott. The banquet is sponsored by the Baton Rouge Orthopaedic Clinic.

Ireland retired three years ago after 30 years as the Sports Information Director at his alma mater, Northwestern State University. He remains the chairman of the Louisiana Sports Hall of Fame, a position he has held since 1990, and thus remains heavily involved in the sports scene in Louisiana.

“To have any recognition in (basketball) for a hobbit-like guy such as myself who barely played in high school, is mind boggling,” said Ireland. “Hearing the news was stunning and nothing I ever imagined.”

Ireland grew up in Jonesboro and graduated in 1982 from Northwestern State with a degree in journalism. His career took him from the Natchitoches Times to the Shreveport Times, to Louisiana-Monroe and Louisiana-Lafayette, and on to the Alexandria Town Talk.

Former LABC Mr. Louisiana Basketball Tynes Hildebrand, who was Northwestern State’s basketball coach when Ireland arrived as a student in 1978, was the Demons’ athletic director when he hired Ireland away from the Alexandria Town Talk in 1989. Ireland would remain for three decades as the Demons’ jack-of-all-trades SID.

When McConathy left Bossier Parish Community College after 16 seasons to tackle the job at Northwestern State, awaiting him was Ireland.

“He really did a lot to help us, coming from a community college to a Division I program at Northwestern State and making that transition smooth,” said McConathy, who retired from coaching in March.

Ireland’s transition from reporter at the Alexandria Town Talk to Northwestern State SID wasn’t nearly as smooth, as he had to publicize a basketball program on NCAA probation. Ireland arrived midway through the first season of new basketball coach Dan Bell, who eventually gave way to J.D. Barnett, the former Tulsa and VCU coach.

“Dan took over the program when it was in its most dire situation,” recalled Ireland. “Dan and Mike were similar. JD was a throwback coach. A brilliant tactician, much like General George Patton. The kids who finished under him adored him.”

“Those seasons with Mike McConathy are one of the great blessings of my life, no question,” said Ireland.

“In the NCAA Tournament situations, he meshed everything together and maximized the exposure for our program and for the players,” said McConathy. “He was a master at doing that.”

For Ireland, Northwestern State’s NCAA Tournament appearances in 2001, 2006 and 2013 were a reminder of what he experienced in his first college job as an assistant at the University of Southwestern Louisiana (now Louisiana-Lafayette) under sports information director Dan McDonald.

The Ragin’ Cajuns were rolling under Louisiana Basketball Hall of Famer Bobby Paschal. A year before Ireland arrived, the Cajuns beat a Patrick Ewing-led Georgetown team that would lose in the NCAA Tournament championship game. The program would go on to make an NCAA Tournament and advance to the 1984 NIT Final Four and another NIT in Ireland’s three years.

“When I think of receiving this honor, it really all started with Bobby Paschal at USL,” he said. “I’m so grateful I had that opportunity early on in my career.”

Ireland also covered the Lady Techsters in their heyday under former LABC Mr. Louisiana Basketball Leon Barmore with Teresa Weatherspoon at point guard. Before then, he was on the stat team for the LHSAA Sweet 16 at the Rapides Parish Coliseum, watching Kim Mulkey lead Hammond High School to state championships.

“It’s the most unlikely recognition in some respects,” said Ireland. “It all comes back to 19 years with Mike McConathy and the opportunity with the Louisiana Sports Hall of Fame to commemorate basketball history.”

Ireland not only provided publicity and recognition for the Northwestern State basketball program, but he also assisted legendary Louisiana broadcaster Lyn Rollins, who was the radio voice for the Demons for 10 seasons until 2003-04.

Rollins recalls that Ireland’s many talents went well beyond the basketball court.

“It was always an adventure to return from a road game with Doug late at night,” said Rollins. “There would be a phone in one hand, a newspaper in the other, a box of fried chicken on his lap and the radio would be tuned to a basketball game somewhere.”

Rollins appreciated Ireland’s ability to enhance their broadcasts, something not all analysts are able to pull off.

“As a sidekick, he was very perceptive,” said Rollins. “For a professional whose background training was in print journalism, he had a keen instinct of when to talk and when not to talk, allowing the atmosphere to tell the story.”

“Today, it’s not uncommon, and almost mandatory, for a reporter to be a multi journalist. Doug was one of the few when he started who had the skills to transfer from print into broadcasting. His print background served him well.”

Even though football is king in Louisiana, and that is certainly the case on the collegiate level, Ireland said he always enjoyed basketball season for its intimate nature.

“Of all the sports you cover, basketball is maybe the most personal,” he said. “You are that close to the court. You can almost touch it. As an SID, with the limited number of players, and the amount of time you spend with them in travel, it is a close-knit feel.”

McConathy appreciated the fact Ireland always put the players first in everything he did during basketball season.

“He was tireless,” said McConathy. “He did so many things that no one knows about … he was an institution at Northwestern State.”

“I have always heard people say they were humbled by receiving an award,” said Ireland. “I know they are being sincere. I’ve had the opportunity to observe them first hand at the LABC dinner. I know how much respect those people had within the basketball community. To be considered by the LABC as fitting to be in that list is almost absurd but so deeply appreciated.”

In addition to honoring Ireland, the May 7 awards banquet will include the induction of former Loyola University national championship-winning coach Jack Orsley into the Louisiana Basketball Hall of Fame. There will also be recognition of Louisiana’s major college, small college, junior college and high school players and coaches of the year, along with the top pro player from the state. More information about the LABC can be obtained by visiting their website at www.labball.com.