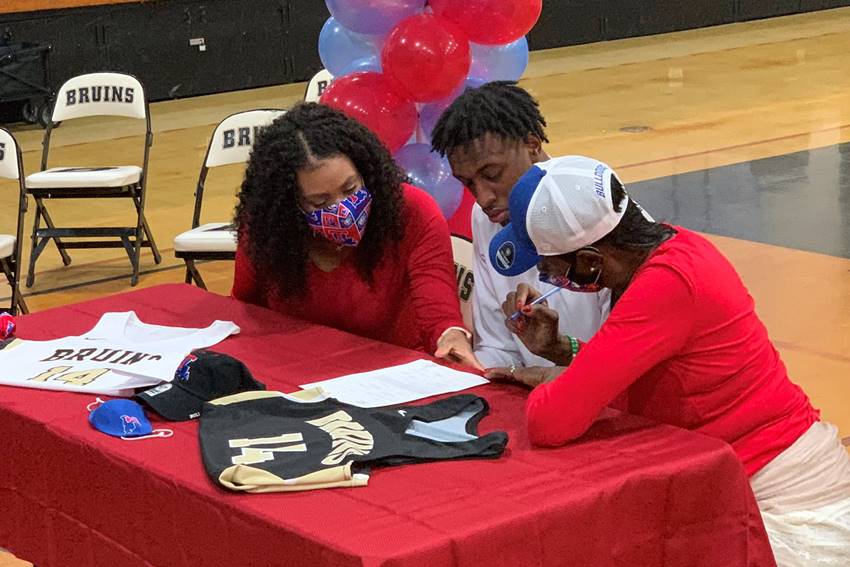 Bonnabel forward Will Allen officially signed his letter of intent with Louisiana Tech Thursday, choosing the Bulldogs over several offers.

As a junior, Allen was named second-team All-State, averaging 14.6 points per game. Allen was the only non-senior to make either the first or second team.

Allen was part of a Bonnabel squad which reached the 5A state title game in 2017 and in 2019, he helped the Bruins to a 5A semifinal appearance.

“The coaching staff just took my heart away with the way they believed in me and they see something special in me,” Allen said. “I can’t wait to get up there and make my mark.”

“I feel like I can help them get extra possessions rebounding, offensive and defensive,” Allen said. “I can help energy on defense and make the offense run smoother and become that energy guy.”

There is still unfinished business at Bonnabel, winning that elusive state championship.

“I’m extremely excited,” Hagans said. “When he walked in four years ago, he had a dream and a vision of playing Division I basketball. This is a dream come true for him and for our program. It couldn’t have happened to a better kid. He can improve his ball handling and making shots but he is super, super talented. He will help immediately with offensive and defensive rebounding. He’s the hardest working kid on the floor every single night.”

Hagans is glad to have Allen for one more year.

“We’re really young,” Hagans said. “We lose seven of our top nine players from last year so. We’ll get there. There’s a lot of coaching them up.”

Bonnabel opens its season next Wednesday.