First impressions often mean so much, if not everything.

They are hard to overcome, positively or negatively.

The deck was stacked against Mitchell Trubisky from the start due to circumstances beyond his control.

The instant image, playing in a large market for a tradition-rich franchise, was negative and it has been an uphill battle for the young quarterback since then.

While NFL players lived in a pseudo bubble in the preseason, NBA players did so in Orlando and the general public has done so at large, in many instances, over the past several months, Trubisky has lived in a bubble in Chicago.

As is the case with many in the pandemic era of the United States and the world, it is not by choice for Trubisky.

Trubisky did not draft himself in 2017. He did not invite the scrutiny, criticism and skepticism which followed when the Bears drafted him with the second overall pick in that year’s NFL Draft.

The Bears wanted Trubisky desperately, identifying him as their franchise quarterback who could lift them to heights not seen in Chicago since the days of Mike Ditka and 1985.

Incidentally, the No. 67 pick was eventually traded to the Saints, who turned that pick into none other than Alvin Kamara.

While Trubisky has not been as bad as many analysts have painted him out to be, the picture still is not a pretty one.

Trubisky is a very respectable 29-21 as a starter with Chicago. That includes a 6-3 mark this year.

He has completed 64 percent of his passes with 64 touchdown passes and 37 interceptions. Trubisky has a Quarterback Rating of 87.2.

In his three previous seasons, Trubisky took the Bears to the playoffs just once.

Now, it is twice.

Of course, he only started nine of the 16 games this year as he lost his job early in the season to Nick Foles, who was then injured and replaced by Trubisky, who then kept the job.

That was not exactly the vote of confidence from Matt Nagy.

One of the qualities which attracted the Bears to Trubisky was his running ability.

Trubisky has rushed 190 times for 1,057 yards and eight touchdowns.

This season, Trubisky has played in 10 games, completing 67 percent of his passes for 2,055 yards and 16 touchdowns with eight interceptions for a Quarterback Rating of 93.5. Trubisky has been sacked 18 times. Trubisky has 33 carries for 195 yards and a touchdown.

The Saints faced Jalen Hurts a few weeks back, a running quarterback. Of course, New Orleans did not fare well that afternoon but you have the feeling New Orleans will be better prepared this time around for a player of that ilk.

While Trubisky has been a decent and sometimes impressive player, he will never be assessed fairly by Chicago fans for the decision made by the organization to mortgage so much to get him and what followed in the 2017 Draft.

The Saints then chose Marshon Lattimore 11th and many observers and many with knowledge of the situation felt strongly that Sean Payton would have pulled the trigger on drafting Mahomes if he were still on the board.

Needless to say, both Mahomes and Watson have panned out quite well, significantly better than Trubisky.

Mahomes is the best, most talented player in the NFL, though Aaron Rodgers will get the Most Valuable Player award this season. He is significantly better as a passer and runner than Trubisky.

Watson is a better passer and runner than Trubisky and has already been selected to the Pro Bowl in all four of his NFL seasons.

There is history between Sean Payton, Dennis Allen and the Saints against Trubisky.

A rookie, Trubisky looked the part, completing just 14-of-32 passes for 164 yards with an interception for a Quarterback Rating of 46.9. Trubisky did rush three times for 53 yards, including a 46-yard jaunt.

Trubisky was better on that day, completing 34-of-54 passes for 251 yards and two touchdowns with no interceptions for a Quarterback Rating of 86.3.

Interestingly, Trubisky did not run once in that contest as the Bears, alarmingly, had just seven running plays in the entire game as the Saints dominated the football and the Bears played from behind all afternoon.

A week ago, Trubisky was efficient against the Packers in a 35-16 loss at Soldier Field.

Trubisky was accurate, completing 33-of-42 passes (78.6%) for 252 yards with an interception. Trubisky rushed four times for 22 yards.

The Bears had momentum, trailing 21-16 in the fourth quarter and were in the midst of a time consuming drive with a chance to take the lead.

Chicago went on a 14 play, 60-yard drive, reaching the Green Bay 25-yard line but on fourth down and less than a yard, the Bears inexplicably tried to throw the ball, rather than sneak Trubisky. The pass fell incomplete and the chances of an upset disappeared as the Packers took control and scored twice to pull away for the victory and the No. 1 overall seed in the NFC, relegating the Saints to the No. 2 seed.

Trubisky had played well in three previous wins for the Bears.

His future in Chicago could be on the line in how he performs against the Saints.

While Foles may not be the answer moving forward, Chicago may well move on from Trubisky if he does not show well in the playoffs.

The Bears declined the fifth-year option on Trubisky for the 2021 season, saving $24,8 million by not picking up the option.

Clearly, the Bears, former Saints executive and current Chicago General Manager Ryan Pace and Nagy are not sold on Trubisky.

They may be sellers, rather than buyers, at season’s end.

At 26, Trubisky is still young and has a future in the league.

Will it be in Chicago?

Will a change of venue help him discover his full potential?

The New Orleans Saints want to make sure that future starts after a Bears loss on Sunday.

While Trubisky is talented, he is guilty until proven innocent in the eyes of scoffing analysts who doubt and criticize his play.

The Saints want to keep a unanimous jury verdict on Trubisky and not a reversal and, in trial parlance, to avoid being hung out to dry with another disappointing ending to a season. 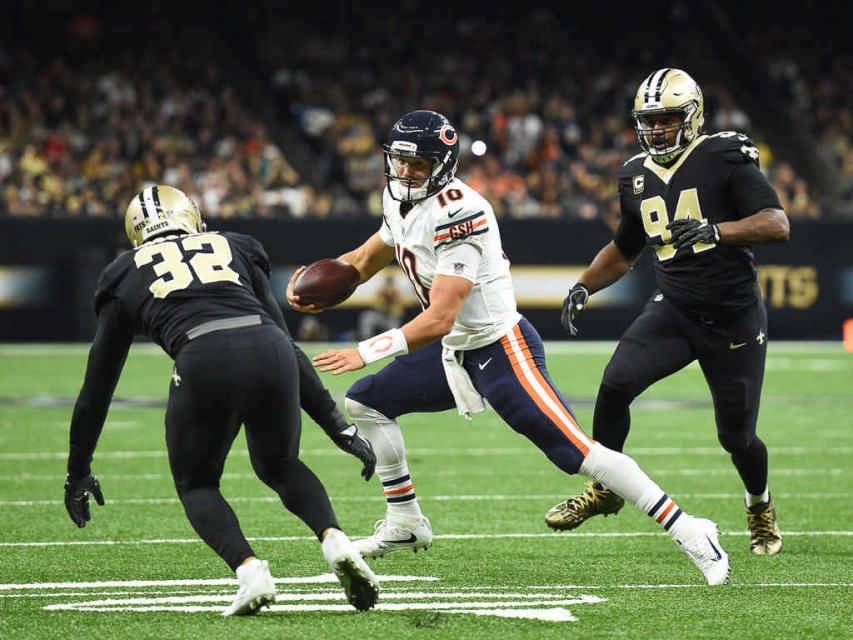 New Orleans is 0-2 in the playoffs against Chicago but both losses came at Soldier Field.