Houston pulls away in second half to defeat Tulane, 40-22

The loss marked the Green Wave’s first loss to the Cougars at home since 2015. The trenches proved to be the biggest difference in the ballgame as Tulane struggled to control the Houston pass rush allowing eight sacks in the loss.

“At times we ran the ball well, had some good plays,” head coach Willie Fritz said. “There were some good things, but we have to do a better job of executing.”

Despite being under pressure most of the game, Tulane quarterback Michael Pratt was efficient through the air, completing 20 of his 30 passes for 214 yards, two touchdowns, and no interceptions.

The Cougars’ quarterback Clayton Tune threw for 288 yards and three touchdowns in the contest.

The lone turnover of the contest was a Pratt fumble which turned into three points for the Cougars to change the momentum of the game.

Houston scored touchdowns on their first two drives to take an early 14-0 lead in the first quarter.

“As a defense, we need to come out harder and faster,” Clark said. “We have to focus on the next week, going in 0-0.”

Tulane got on the board with 10:45 left in the second quarter with a 13-yard pitch and catch from Pratt to Tyrick James. The score marked the 16th straight game Pratt has thrown for a touchdown. The Wave completed a two-point conversion to make it a 14-8 game.

After Houston added a field goal, the Green Wave drove down the field and scored on a 39-yard rush up the middle by Tyjae Spears to cut the Cougars’ lead to 17-15 right before half.

Directly out of halftime, Tulane stopped Houston on fourth-and-one on the Cougars’ own 29-yard line. On the very next play, Pratt connected with tight end Will Wallace on a touchdown strike to give the Green Wave its first lead 22-17.

“We have to look ourselves in the mirror and find a way,” Wallace said. “It’s a unity thing, getting everybody on the same page. We have to do whatever it takes to win.”

Unfortunately, the advantage did not last for Tulane as Houston scored on three of its next four drives while holding the Wave scoreless the rest of the way.

The Cougars tacked on one final score with just over one minute to play to put the final tally at 40-20.

The Green Wave is back in action Thursday, October 21, as it travels to Dallas to battle SMU. Kickoff is at 6:30 p.m. CT.

TEAM NOTES
• Tulane’s matchup with Houston marked the 26th all-time meeting between the two teams.
• With the loss, Tulane fell to 19-7 all-time against Houston.
• The Green Wave’s setback marked the first time since 2017 that Tulane has lost four straight games.
• Tulane dropped its American Athletic Conference home opener for the second straight year.
• The Green Wave found themselves in a 14-point hole at the end of second quarter, but responded by outscoring Houston 22-3 over the next quarter and a half of play to take a 22-17 lead.
• The Cougars went on to score the final 23 points of the game to secure the win.
• As a team, Tulane was outgained 435-308.
• Nick Anderson, Sincere Haynesworth, Dorian Williams and Jeffery Johnson served as the team captains.
• Tulane linebacker Kevin Henry carried the Wave of Change flag and Green Wave quarterback Michael Pratt carried the No. 18 flag in honor of former Tulane student-athlete Devon Walker.
• With the loss, Tulane head coach Willie Fritz moved to 223-112-1 all-time.

OFFENSIVE NOTES
• Offensive starters for the Green Wave were QB Michael Pratt, RB Cameron Carroll, WR Jaetavian Toles, WR Shae Wyatt, TE Tyrick James, TE Will Wallace, OL Sincere Haynesworth, OL Caleb Thomas, OL Corey Dublin, OL Rashad Green, OL Joey Claybrook.
• Dublin’s start was the 55th of his career. Dublin has the most starts of any player on the team.
• Pratt passed for 214 yards through the air. He also threw two passing touchdowns.
• Pratt has now passed for over 200 yards in eight career games.
• Pratt has now thrown multiple touchdown passes in 13 career games.
• With his passing score in the second quarter, Pratt extended his consecutive passing touchdown streak to 16 games.
• Running back Tyjae Spears registered longest carry of the year in the second quarter, as he rushed in from 39 yards out.
• James and Wallace both hauled in their third receiving touchdowns of the season.
• Wide receiver Shae Wyatt led the team with five receptions. His five receptions tied a season-high.

DEFENSIVE NOTES
• Defensive starters for the Green Wave were DL JoJo Dorceus, DL Jeffery Johnson, DL Noah Seiden, LB Dorian Williams, LB Marvin Moody, DB Jadon Canady, DB Jaylon Monroe, DB Ajani Kerr, DB Macon Clark and DB Derrion Rakestraw.
• Johnson’s start was the 38th of his career which is the most of any player on the defense.
• Tulane outgained Houston 138-50 in the third quarter and held the Cougars to just three points.
• Clark led the team with 10.0 tackles and 2.0 tackles for loss. He also had 1.0 sack.
• Kerr tallied a game-high two pass breakups.
• For just the second time this season, Tulane failed to create a defensive turnover.
• As a team, Tulane finished the game with 5.0 tackles for loss and 2.0 sacks. 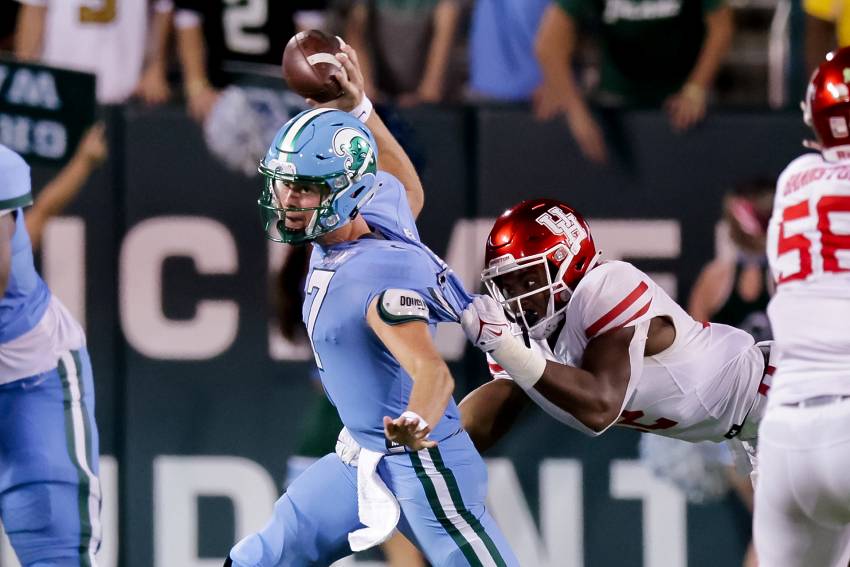