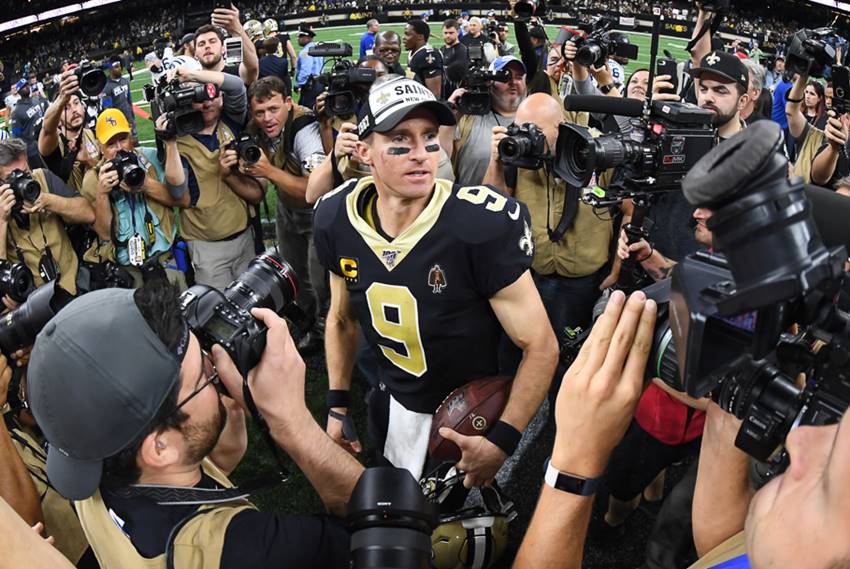 The New Orleans Saints are entering the sudden-death NFL playoffs.

Any game could be their last game of this season, but any game could also be the last of Drew Brees’ career – beginning with a Wild Card game against the Chicago Bears on Sunday in the Mercedes-Benz Superdome.

Brees hasn’t said this will be his final season and he might choose to return for a 16th season in New Orleans next fall.
But it seems more likely that the end of this season will mark the end of the career of the best player in Saints history.

Brees very nearly retired after last season, which ended about as abruptly in a Wild Card home loss to the Vikings as a loss to the Bears would be.

But Brees decided to come back and take another crack at winning a second Super Bowl with no indication that he was re-upping for more than one more season.

The most prolific passer in NFL history will turn 42 years old next week. He has had the only two significant injuries of his Saints career each of the last two seasons – a thumb injury that required surgery last season and 11 fractured ribs and a punctured lung this season.

He has played well enough to help orchestrate the current best four-year run in Saints history, which has produced the best won-lost record in the NFL during that time frame.

He is still playing well enough for the Saints to have won four consecutive division titles, to enter this post-season with a 12-4 record.

Brees was asked about his future this week and didn’t shed any light on whether this is his last season or even if he has made a decision one way or another.

“You know what, honestly, I’ve played the last four seasons in a row as if it was my last,” Brees said. “So as I sit here, right now, my approach is very much the same.”

We should do the same – approach whatever is left of this season as though it is Brees’ last.

If this season is Brees’ last, then his final game could come as soon as Sunday, though oddsmakers think that is unlikely, having installed the Saints as the biggest favorites on Wild Card Weekend – 10 points.

If the Saints win the NFC then the season – and quite possibly Brees’ career – would end in the Super Bowl on Feb. 7 – 11 years to the day after Brees was named MVP of New Orleans’ only Super Bowl title – in Tampa, fewer than 300 miles northwest of the site of that first title in Miami.

Certainly a victory one month from now would bring perfect closure to Brees’ career, enabling him to leave the stage as a reigning Super Bowl champion – as John Elway did, as Peyton Manning did.

If such a scenario were to happen, it presumably would make it easier for Brees to walk away, though it wouldn’t be surprising if Brees were to walk way after anything short of another championship.

We don’t know how much longer he’ll be here.

So as the Saints embark on another Super Bowl quest, let’s make it a point to appreciate what we have witnessed since 2006, what we will witness Sunday and anything more we might be able to witness beyond Sunday.

Let’s remember the unexpected run to the franchise’s first NFC Championship game in 2006 – the first season of the Sean Payton/Brees era, the first season post-Hurricane Katrina season, which ended against the Bears in frigid Soldier Field.

But Brees has been at the center of each and every group. Only Payton has been as integral part of this era, although he was suspended for the 2012 season.

As the Saints go about their business Sunday and perhaps beyond, let’s appreciate what we are witnessing as though it will be the last time we witness it – because it could be.

Appreciate each time Brees gets his offense lined up, surveys the defense, identifies precisely the best opportunity and attacks it. We’ve seen him do it so well for so long that it’s easy to forget how hard it is for someone to play quarterback in the NFL – how many teams have used high first-round draft picks trying to find someone of Brees’ caliber and never having done so.

Appreciate the near-perfect accuracy with which he can still deliver the football to a receiver, whether it be an All-Pro such as Michael Thomas with whom he has repped patterns thousands of times or whether it be a newcomer just elevated from the practice roster.

Appreciate all the times he has lined up under center on the goal line and you, me and everyone on the defense knew he was going to leap above the line and extend the ball for a touchdown and he did it anyway.

Appreciate all the times that the opponent tied the score or took the lead in the final minute or two and you just knew that as long as Brees had the football and there was time on the clock, the Saints had a chance, often times a better chance than the opponent that had just scored.

Brees hasn’t announced his retirement so this season hasn’t been a farewell tour. But this post-season should be treated as such.

The post-Brees era doesn’t seem as bleak as it might have before the Saints were forced to play without him the last seasons – and did just fine.

Someday soon, perhaps as soon as next September, the New Orleans Saints will begin the post-Brees era.

So just in case this post-season is the final chapter in Brees’ career, let’s take the time to appreciate it and him.