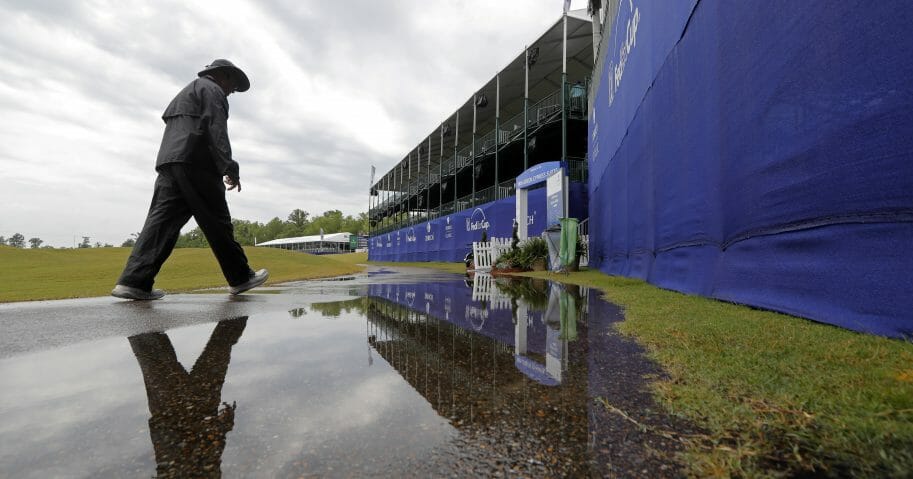 The forecast was ominous. It proved to be prophetic.

It was simply a matter of time before heavy rain deluged the TPC of Louisiana course at the 2019 Zurich Classic in Avondale.

Play was suspended at 9:41 a.m. and within 10 minutes, a torrential downpour arrived and flooded the course over several hours.

It did not take long for water to make its way into the media tent, where many of us retreated to.

A couple of strong bands of rain which produced massive rain and some thunder and lightning prevented players from returning to the course until 5:15 p.m.

When they did, the team of Americans Scott Stallings and Trey Mullinax carded an 11-under 61 to take the lead among those who played and finished their opening rounds.

The duo of Martin Laird and Nick Taylor got their round in and shot a 10-under par 62.

Brian Gay and Rory Sabbatini were at 10 under par as well through 14 holes when darkness set in.

A pair of teams finished their rounds at nine under par 64, including the team of Joel Dahmen and Brandon Harkins, along with the duo of Brice Garnett and Chesson Hadley.

Whee Kim and Sungjae Im shot an eight under par 64. Kevin Kisner and Scott Brown were at eight under through 14 holes.

Among those at seven under par still on the course are Bubba Watson and J.B. Holmes, John Rahm and Ryan Palmer and the Australian team of Jason Day and Adam Scott.

Brothers Brooks and Chase Koepka finished with a five under par 67.

In all, 41 teams did not get to start their first rounds, including the pairings of Patrick Reed and Patrick Cantlay, Louis Oosthuizen and Charl Schwartzel and defending champions Billy Horschel and Scott Piercy.

Following the rain, the course played soft and easier for the players, who went low.

The remainder of the first round will be completed Friday beginning at 7 a.m. before the second round begins tomorrow with the foursomes format in place, which should move more quickly than the four-ball format of the opening round.

The forecast for the weekend is outstanding.