Hardwood to Gridiron: Basketball players who ended up in the NFL 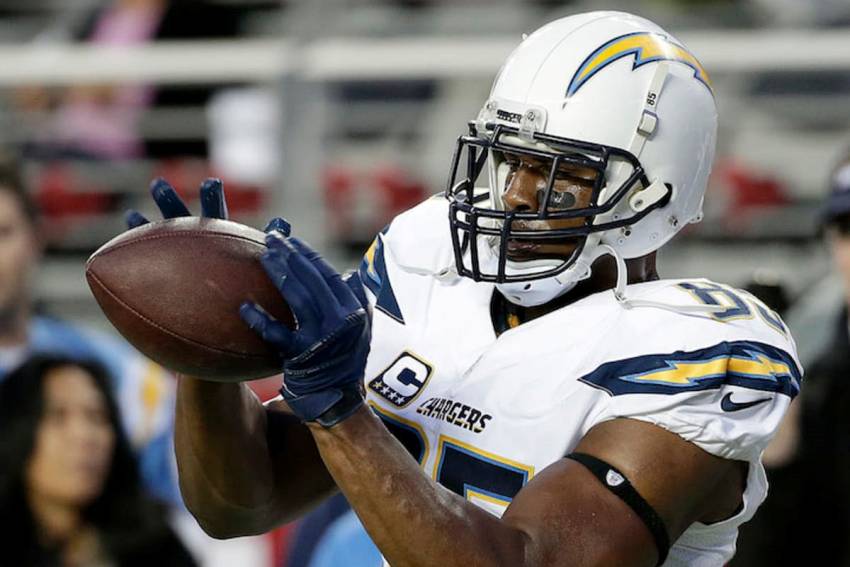 Are basketball players the best overall athletes in sports?

That has been widely speculated hoopsters in part because many began their sports journey on the hardwood before transitioning to the football field.

There are quite a few that made a successful adjustment to the NFL. Some were dual-sport college standouts. Some found football life after basketball as professionals.

Let’s look at some notable examples:

One of the very first players to make a successful transition from college basketball to the NFL, the 6-foot, 3, 205 pounder at Utah State before joining the Dallas Cowboys as an undrafted free agent. He remained in Big D from 1962 to 1974. His older brother Pumpsie Green was the first black player to ever suit up for the Boston Red Sox.

The former walk on basketball player at University of Illinois averaged 8.7 points and 6.0 boards as a senior. He had a 40″ vertical which he demonstrated in a game against the mighty UCLA Bruins when he blocked a sky hook attempt by Lew Alcindor (Kareem Abdul-Jabbar) . Pearson went on to play 14 seasons in the NFL and won a pair of Super Bowls (w/ Steelers, Cowboys). He shared the backfield in Dallas with Calvin Hill, Tony Dorsett and Walt Garrison. He was inducted into the Illinois Basketball Hall of Fame in 2017. As a 12th round draft pick of the Colts in 1967, Pearson was tried at defensive back initially.

A two-year starter as a power forward at Seattle University, he averaged 9.2 points and 6.5 rebounds. As an undrafted free agent, Howard spent six years in the league (68 games) with Dallas, Seattle and Buffalo. And no, he’s not THAT Ron Howard.

He teamed with high scoring James “Fly” Williams at Austin Peay (1973-’74), averaging 12.4 points and 7.3 rebounds. Howard had never played football prior to landing in NFL with the Cowboys (1975-’77). In Super Bowl X, he ran past Mel Renfroe and caught a 34-yard TD pass from Roger Staubach for the only grab of his NFL career.

He turned down an offer in the NBA with the Baltimore Bullets after starring on the basketball court at Michigan State (1962-’64) and averaging 17.4 points per game. When he left the Spartans, Gent was the school’s second all-time leading rebounder with 1,146. He signed with the Cowboys, having never put on a pair of shoulder pads, and spent 1964-’68 in Dallas. Head coach Tom Landry tried him at defensive back and receiver. Through the urging of QB Don Meredith, he landed at tight end. All of those position moves was the reason he wore jersey #35. Gent snared 68 passes for 989 yards and four scores in his career. He may be best known for writting the book North Dallas Forty.

Initially enrolled at Michigan State to play football for Nick Saban and basketball for Tom Izzo, he transferred to Eastern Michigan and then College of the Sequois JUCO before finally landing at Kent State. In two seasons with the Golden Flashes, he averaged 20.6 points, 7.7 boards and 4.0 assists his senior season, helping his team reach the Elite 8. After hoops, 19 NFL teams contacted Gates for a tryout. He had never played football as a youth, yet went onto play 16 seasons with the Chargers, recording 955 catches for 11,841 yards and 116 touchdowns. He is a member of the NFL 2000 All-Decade team and part of the Chargers 50th anniversary team. Next stop, Canton.

Here’s another one in the Gates mold. The five-time Pro Bowler and 2013 All Pro played basketball at Miami (2005, 2007) and then joined the ‘Canes football squad in 2009. Graham was selected by the Saints in the 3rd round of the 2010 draft and enjoyed his career peak in New Orleans. Now in his 12th campaign as a member of the Bears, he has 700 catches for 8,350 yards and 82 scores for his career.

He played basketball at Indiana where he was an All-Big Ten power forward, averaging 14.7 points and 10.5 rebounds as a senior. Hoosiers head coach Bobby Knight recommended him to Cowboys GM Gil Brandt, who tried him first at offensive tackle. Johnson was released by Dallas in 1970 but picked up by Cincinnati where he spent eight seasons and played in 79 NFL games with 36 starts.

He played basketball al Lamar averaging 12.6 points and pulling down 718 career rebounds. Undrafted, Moore signed with the 49ers in 1968. After he was released, he signed with the Dolphins and started 72 games. Named to the Pro Bowl in 1973, Moore helped the Dolphins win Super Bowls VII and VIII, including the perfect 16-0 1972 Dolphins.

At Pitt, he averaged 14.6 points and 11.6 rebounds. Panthers head football coach Jackie Sherrill convinced Clancy to give football a try. He teamed with Rickey Jackson, Hugh Green and Dan Marino on very good teams and then spent 10 seasons in the NFL (152 games and 30 career sacks).

A dual-sport performer at Miami of Ohio (football only in 2014), he was a second round pick by the Packers in 2015) and played in 116 games with 106 starts in Green Bay. Rollins was the MAC Defensive Player of the Year with 72 tackles and seven interceptions his final collegiate season.

Following a stellar prep basketball career at Riverside Academy (Reserve, La.), he eventually signed with Baylor. The bruiser averaged 11.6 points and 11.6 rebounds for the Bears and then spent four seasons in the NFL with the Browns and the Cowboys. He is a cousin of the late Hank Gathers of Loyola Maramount.

A member of a North Carolina Final Four team in 2000, he averaging 5.7 points and 3.7 rebounds. Of course, he starred for the Heel in pads as well and was a first round pick by the Carolina Panthers in 2002. He spent 17 seasons wreaking havoc on NFL QB’s. Peppers was a nine-time Pro Bowler with 159.5 career sacks.

A post player at UC Irvine, averaging 10.2 points and 6.0 boards, he played pro basketball in Argentina, Mexico, Belgium, France and Finland. He is now in his ninth campaign in the NFL, currently with the Detroit Lions. He has 126 career grabs for 1,520 yards and 21 TD’s.

At Portland State on the hardwood, he averaged 10.8 points and 5.9 rebounds, hitting 67% of his shots from the floor. He was a fourth round pick of the Broncos in 2011, played seven seasons in the NFL and made a pair of Pro Bowls.

Another dual sport star who excelled in both football and basketball at Cal, he averaged 6.4 points and 4.3 rebounds, shooting 51% during his three-year tenure with the Golden Bears/ the hoops highlight was a Sweet 16 appearance as a junior. The following season, he decided to be a full-go in football. Gonzalez was a first round pick of the Chiefs in 1997 who ended up as a 14-time Pro Bowler and six-time All Pro. He was inducted into Pro Football Hall of Fame in 2019. His career included 1,325 catches for 15,127 yards and 111 touchdowns. A great athlete to be sure, it showed in his NFL durability and longevity. 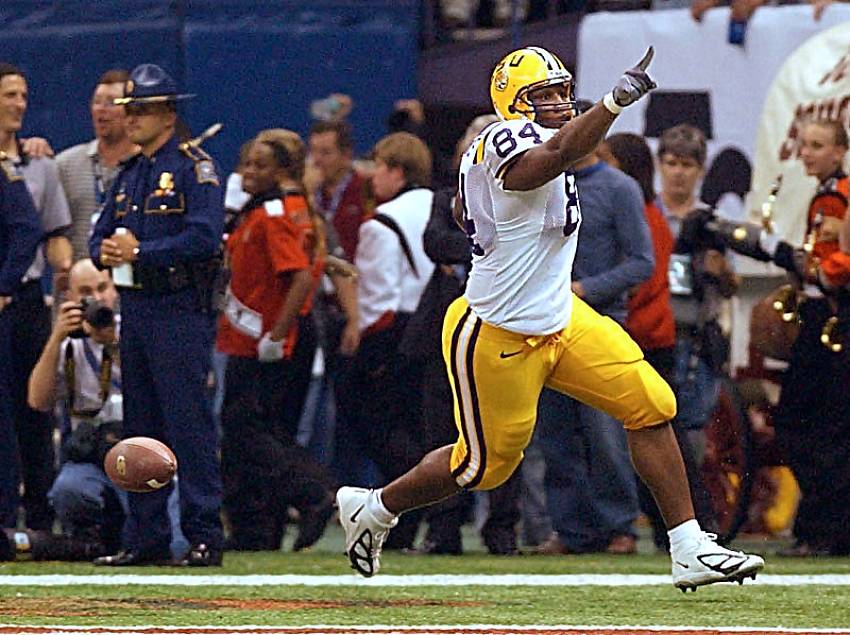 He attended Southern Lab (Baton Rouge) where he was All-State in both football and basketball. On the hardwood, he averaged 23.7 points and 15 rebounds as a senior. He was considered the #1 tight end prospect in the country in the 2000 recruiting class and a top three overall prospect. During his college recruitment, he actually had an offer from the Duke Blue Devils for basketball but decided on football at LSU where Nick Saban moved him to defensive end. The Tigers captured a BCS National title in 2003, and Spears intercepted a pass, returning it for a touchdown in the national championship game. He was the first round draft pick of the Cowboys in 2005 and played in Dallas through 2012 in Dallas. He capped his career with the Ravens in 2013. Marcus totaled 236 career tackles and 10 sacks.

He played basketball at VCU where he averaged 9.7 points and 4.3 boards with 255 blocks and 87 steals. MAC is the VCU all-time leader in FG% shooting (57.4%). He had last played football in 9th grade, but the Colts signed him as an undrafted free agent in 2017. His career numbers are 49 catches for 652 yards and four touchdowns in 43 games as of this writing. Against the Miami Dolphins thiis past Sunday, his two touchdown catches helped Indianapolis overtake the Dolphins 27-17. He wears jersey #81 because of Randy Moss.