Atlanta Falcons wide receiver Russell Gage was a three-star prospect in 2014 at Redemptorist in Baton Rouge who signed with LSU.

Spending his initial two seasons as a defensive back, Gage was buried on the LSU depth chart. After moving to receiver, he finally recorded a statistic with a catch as a junior. That was it.

It wasn’t until his senior season that Gage made a sizeable impact, snaring 21 passes for 285 yards and three touchdowns. He was also a factor on fly sweep runs featured heavily by the Tigers offense that year.

Prior to that, most of Gage’s contributions came on special teams. He was drafted by the Falcons in the sixth round of the 2018 NFL draft. He’s now a regular performer in a high-powered passing attack.

Identical in size to Gage at 6-foot, 184-pounds, Kirklin was also a three-star recruit. As Lutcher High School’s dual threat quarterback, he accounted for 7,500 passing yards plus 3,000 as a runner and 147 touchdowns. He drew offers from Nicholls, Tulane and LSU.

Not blessed with blazing speed, Kirklin does possess exceptional quickness and a tremendous desire. He is a tireless worker, known for sacrificing everything for the good of the team.

“I prayed to get an offer from LSU,” recalled Kirklin. “It was a sign from God saying ‘I’m giving you this, so let’s see what you’re going to do with it.’ I love the QB position. (Coaches) said that I could come in and play. I took that (offer) and ran with it.”

His LSU future did not lie at quarterback but coaches have helped him find a way onto the field in 2020.

Entering this season, Kirklin had 38 game appearances on his resume’ but recorded only three catches for 80 yards. Before that, 12 game appearances came as a defensive back. Current NFL players Donte’ Jackson, Kevin Toliver II, Kristian Fulton, Greedy Williams, Grant Delpit as well as current draft prospect Kary Vincent stood in his path in the defensive backfield room.

“A lot of people want to come in and play (immediately). I came in with great guys in front of me. I always worked. I took notes, always asking questions throughout my two years playing cornerback after playing QB in high school, never really playing on the defensive side of the ball. I worked my tail off before I got to LSU, just to have basic fundamentals to be able to play corner. Then my second year the coaches were telling me ‘come play wide receiver.’ I really busted my tail just to get on the field.”

Kirklin played a major role preparing his teammates in practices leading up to the national title matchup with Clemson, playing the role of the dynamic Trevor Lawrence as the scout team quarterback. “I felt like I helped the whole defense,” Kirklin said proudly. “I was so proud of those guys in the championship game. I felt like I was a coach on the sideline that whole week of preparation for the championship game. (Lawrence ) can do this, he can do that. Me having a QB background helped, plus it showed the coaches what I can do.”

This season started as a bit of a showcase for Kirklin now uncaged. He has accounted for 77 yards on four grabs with a pair of touchdown catches in two games. Three catches for 65 yards and both scores came in a break out game against Vanderbilt last week.

His 28-yard tightrope along the sidelines for a score were LSU’s first points of the contest. The third quarter over-the-shoulder catch for a 29-yard touchdown from Myles Brennan was a thing of beauty, with Kirklin flashing some nifty toe tapping at the back of the endzone.

“That game was a little introduction showing what I could do,” Kirklin said as he smiled broadly. “Getting a little tape on myself. That game kind of showed everyone what I could do. I’ve just got to keep pushing, keep on producing. It’s not like it’s a one-time thing.”

His first touchdown catch against Vandy was well worth the wait.

“After I scored my first touchdown, I came back to the sideline and I almost cried. But I felt like I had more to give. I felt all the love cover me, but I knew that I had to finish. I was just so joyful, so proud of myself that I was able to go out and perform at the level that I performed at. Finally getting into the endzone after 4 years of hard work.”

Kirklin’s performance not only elevated him to become a fan favorite. His coaches are rooting for him as well.

“Perseverance,” LSU head coach Ed Orgeron said with obvious excitement in his tone. “Jontre’ comes to work with a smile on his face everyday. Like I said, Jontre’ is like one of my sons. I’m so close to him and his family. Him being from Lutcher and we recruited him. Outstanding young man. No one wants him to have more success in the program and we all do. It’s good to see, but he’s waited his turn. We tried to get the ball in his hand, played Wildcat and tried to play defense. He told me, ‘You know what, Coach, I want to play receiver. I’m going to be a darn good receiver.’ And he sure is. I hope he has a great senior year.”

Kirklin appreciates the support but deflects any praise, crediting his teammates and noting the camaraderie they share.

“With everyone in the receiver room, it doesn’t matter who is playing. It doesn’t matter who catches the touchdown. I’m going to be happy for my guys. We’re all leaving out blood, sweat and tears on the field. We always hold each other accountable to make the plays, to do what we’ve got to do for the team.”

Kirklin and his quarterback Brennan share a special bond, both having demonstrated persistence and staying power to wait their turn. Both were confident that their time would arrive. They sharpened their craft behind the scenes the past two seasons.

“Me and Myles were doing second team reps. There were plays where he was throwing me the ball. We always had that chemistry, always knowing how I’m going to get in and out of my routes. Him throwing the ball certain ways. All these years playing receiver. We developed a good chemistry.”

It has been a long time since Kirklin has felt the emotion, the celebration of crossing the goal line with the ball in his hands like he did in Nashville last week. After getting a taste of success, he is anxious to make it a frequent occurrence.

“That endzone felt good,” Kirklin said. “The end zone is amazing. I almost busted out in tears after the first touchdown because I was so happy with myself. I finally scored ! After all those years and not touching the ball in a game setting. It’s always going to work out. Just keep grinding.”

With a group of talented receivers battling for snaps, Kirklin will continue to grind for snaps and that chance to make the most of every opportunity. 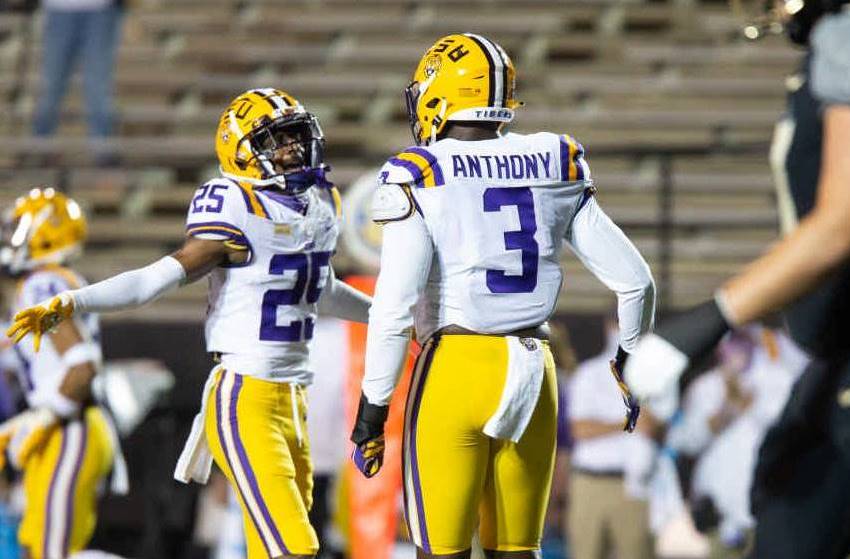