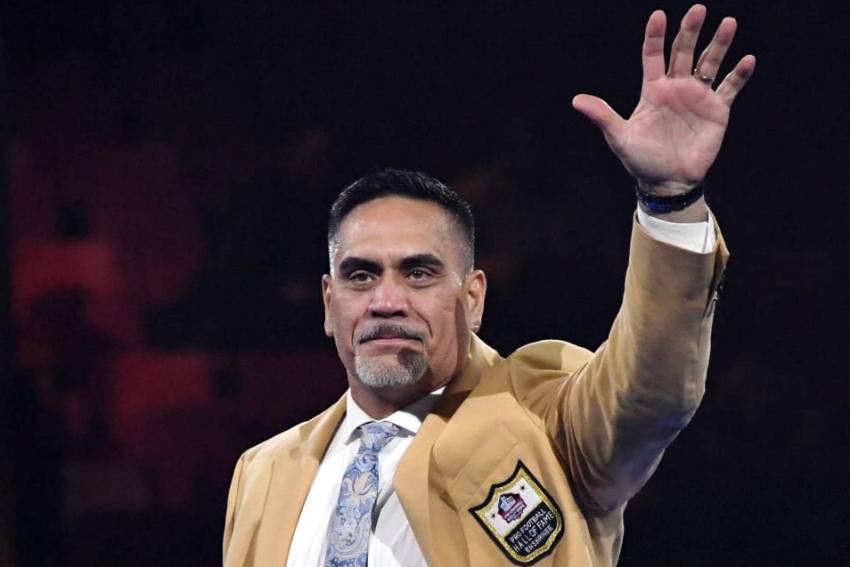 This article is about blocking for an offense as a down lineman. Being an offensive lineman at any level can be a thankless job.

An individual must live by certain standard when he signs up for the position. It is a learned role where effort is vital. It is the least known and most misunderstood position on the field by observers. You must play with controlled aggression. There are no concrete stats for fans to appreciate. More often that not, the only time an offensive lineman is highlighted during a game is when there is a penalty flag on the ground.

No one understands the position better than Kevin Mawae. He toiled in the NFL trenches for 16 seasons. Unlike most to ever do it, his efforts were elite enough to earn him induction into the Pro Football Hall of Fame in 2019.

A military brat, Mawae’s family moved frequently before eventually landing in Leesville, Louisiana. Kevin starred for the Wampus Cats, earning All State honors as a senior.

After signing with LSU, Mawae spent time at left tackle, left guard, center and even tight end. He was a three-time All-SEC performer and third team All-American selection.

Taken by the Seattle Seahawks in the second round of the 1994 NFL Draft, Mawae spent his first two seasons at right guard before finding a permanent home at center. His stellar pro career included eight trips to the Pro Bowl and a seven First team All-Pro nods. Mawae was selected to the NFL’s All Decade team of the 2000’s. He is in the LSU Hall of Fame and the New York Jets Ring of Honor.

Needless to say, Kevin Mawae was a great offensive lineman in every sense.

Now, he is in his first season as assistant offensive line coach with the Indianapolis Colts. As you might expect, Mawae has a keen eye for identifying an offensive line prospect.

“Obviously, DNA characteristics; everybody wants a 6-5, 295 guy,” Mawae stated. “Really, I want to know what kind of person is this guy? Is he selfless? Does he understand he has a thankless job? Is he okay with that? The offensive lineman’s job is an unglorified position. Nobody ever wants to play there. No one chooses to be an offensive lineman when they are younger. Everybody wants to be a QB or receiver.”

It doesn’t matter how you end up as a lineman. It’s what you do as one that counts.

“But if you embrace the role, that’s what you really want to see. You want somebody who loves being there. They understand the work involved, the grind. They understand that they are doing it for someone else. The stats that we don’t get are the one’s that our QB gets or our running back gets. That’s something that we strive for. My quarterback didn’t get sacked last game. My runner got 250 yards. Those are the stats that the offensive linemen are excited about. You want someone who is selfless, who works hard and someone who is accountable for the team, not just themselves.”

Pride and desire are obviously valued but intelligence, discipline and a high football IQ are prerequisites for an offensive line prospect to reach his potential. The challenges go far beyond simply blocking the guy in front of you. Defenses will make adjustments up until the ball is snapped. The five o-linemen form a unit as well as an extension of their position coach.

“Ideally, you want a guy who has quick eyes,” Mawae explained. “Someone who knows what he’s looking at. He’s got to be able to process relatively quickly because things happen in a split second. You’ve got to be able to communicate at the line of scrimmage. Most offensive linemen are leaders by heart. They are usually some of the smartest guys on the team. They are usually highly intelligent type players. Guys who process faster become much better players.”

Perfection in the academic world is noted by a 100% score but an 88% or 95% grade for an offensive lineman may be the highest grade attainable in a given game. True perfection is in the eye of the beholder. “(Grading) is subjective,” continued Mawae. “Everyone grades differently. Some guys are graded poorly because their technique was bad, but the result is that they may win the battle. I played for Howard Mudd. His grading system was, ‘Did your man make the play? How many times did your man make the play?’ If at the end of the day I had more no’s than yes, then I had a good day.”

The quintet up front performs similar to a team pulling a wagon. Their success working well together will determine a team’s success.

“You work as a unit of five. If three guys grade 95% and one guy grades out 60%, there is a chance that you could lose the game. So it doesn’t matter what it looks like because everybody has got to do their job. They are accountable to play at the level of the highest lineman and not the level of the lowest member.”

The mental work helps the body have a chance for success. Technique matters, and it’s a head-to-toe process.

“Football starts from the ground up,” Mawae elaborated. “O-line work starts from the feet to the hands to the head. If you are three inches off on your drop step, it could determine the difference between success and failure. You train the feet first so you won’t have a false step and then your body follows. Linemen have to be sharp and precise with their footwork. Understanding angles and angles with departure. You can go out on the field with a couple of cones and work on angles.”

A “Z” in the knee is a term commonly used by offensive line coaches at every level. If a lineman is in the proper stance, the hip down the thigh continuing down the calf to the foot will resemble a “Z” shape from the side view. Fatigue will become apparent when the player begins to straighten up, breaking the “Z’ form. Mawae is a firm believer in two to two-and-1/2 foot splits, meaning the distance between a right guard’s right foot and the right tackle’s left foot.

The 50-year old Mawae has experienced success at every level but he also has a wide-ranging perspective about what it takes for a player to succeeed. As a coach and instructor, he tries not to complicate the process.

“Football is not a hard sport,” he said. “The reality is the more simple that you can keep it at any level, the easier it is to teach it. If it takes you 10 sentences to explain how to do one thing, then you are probably not explaining it correctly. It’s “KISS’ principle – keep it simple, stupid. Don’t make it harder than it really is. Coaches complicate football more than anyone else.”

Mawae also keeps it simple when to comes to motivating pupils.

“I tell young players to be the best player that you can be and let the chips fall where they may. That’s the approach that I took as an NFL player. I’m going to play hard, I’m going to have fun. I’m going to play the best that I can play. Whatever happens, happens. It was never a dream of mine, and I find myself sitting at the pinnacle. I still have to pinch myself. I get choked up every time that I think about it.”

Naturally an emotional individual, when the reality set in that he was slipping on the gold Hall of Fame blazer and understanding the he was truly in the NFL’s Land of Oz, Mawae was awed.

“It was a culmination of a lifetime of a sport that I am passionate about. I started playing when I was 8 years old. My dream was playing in the NFL. Never in my wildest dream would I have imagined the Hall of Fame. All I ever wanted to do was be the best player that I could be.”

Kevin and his family have been heavily involved in numerous charitable activities for children. He was twice elected as president of the NFLPA during his playing days. He’s been a success on- and off-the-field.

His most memorable moment when the emotions of what he had accomplished as a player came in Canton in an interaction with another legendary lineman.

“I was walking around during the Hall of Fame ceremonies and ran into Larry Little. He tells me ‘Congratulations, welcome. You’ll be one of the best people we will have in the Hall of Fame.’ I told him, thank you. It hit me. Wow! That was Larry Little! And he’s telling me that! I walked away crying like a baby.”