Hall of Fame Feature: For Tony Robichaux, inning on the field was by-product of molding young men for life after baseball 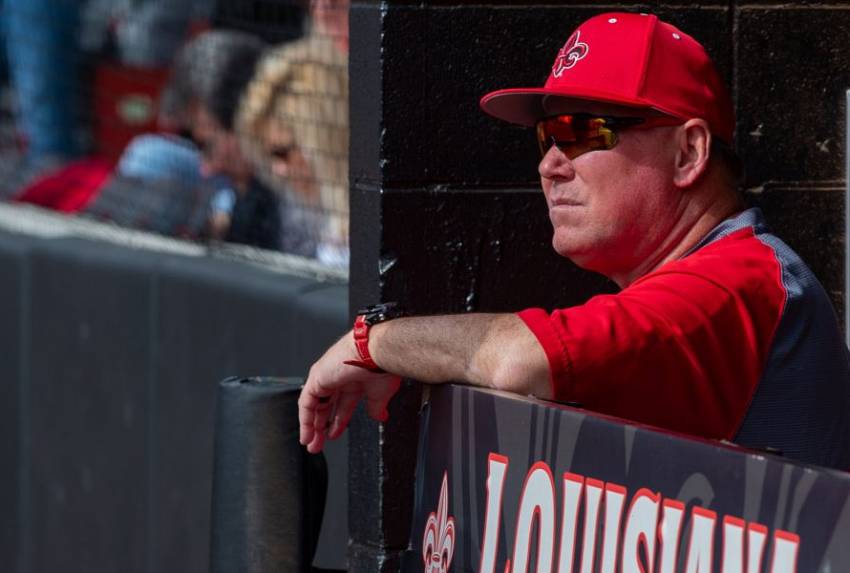 The accolades and honors, the tributes and, yes, the “Robeisms” go on and on, enough to where one of the most unassuming college coaches ever would likely blush and give credit to everyone else.

But it takes only the feelings of two men, both who served as assistant coaches and who went on to find success as collegiate head coaches, to fully understand the impact that Tony Robichaux had on people.

John Szefc brought a Marist team to an NCAA regional at UL’s M. L. “Tigue” Moore Field in 2000, the year that the Ragin’ Cajuns wound up in the College World Series. Robichaux never forgot how hard Szefc’s team played and the character it showed, and three years later he invited Szefc to join his staff as his top assistant.

“He hired a guy from New York years later when I had no experience with that area,” said Szefc, now head coach at Virginia Tech. “I was able to work on a national stage, and Tony gave me that opportunity. As I look back, I was very fortunate that chain of events took place and none of that takes place without Tony Robichaux.”

Matt Deggs’ feelings are even more intense and emotional, after Robichaux brought him back into college baseball in 2012 after the current Ragin’ Cajun head coach’s well-documented battles with alcoholism.

“I was a broken man that was by God’s grace brought back and healed,” Deggs said at an emotional press conference announcing his UL hiring in the summer of 2019. “Seven years ago, Coach saved my life, He saved my family. I was dead, folks. I was gone. Coach Robe gave me an opportunity when nobody else in the country would.”

It’s for those reasons and volumes of others that Robichaux is being honored posthumously in the 2021 class of the Louisiana Athletics Hall of Fame. He will be honored with the university’s highest athletic honor during this week’s Homecoming activities.

He will join baseball standouts Phil Devey and Paul Bako and softball pitching great Ashley Brignac Domec as Hall of Fame inductees at a Friday ceremony in their honor. Family members will also participate in the Homecoming parade and will be honored during Saturday’s Homecoming football game against Texas State.

Robichaux was already the winningest baseball coach in Louisiana collegiate history when a heart attack in June of 2019 led to his untimely death 10 days later. But to his legion of former players at both UL and McNeese – ironically, the two schools where he also played collegiately – he was already a Hall of Famer without the 1,177 wins in his 33-year career.

“He was a much better man than he was a baseball coach, and he was a great baseball coach,” said Glenn Cecchini, his former UL roommate and iconic prep coach at Barbe High in Lake Charles. “He taught so many lessons about life. Really, his winning on the field was just a by-product of him doing things right and teaching guys life lessons through baseball, really molding young men.”

“He would see guys for maybe five or 10 minutes, and yet he would make a significant impact on them,” said former Cajun catcher Ken Meyers, a longtime friend. “They’d walk away thinking, ‘how does he live that kind of lifestyle?’ But that was who he was. He was very public with his beliefs, his morals, his values.”

Many people who met Robichaux never realized that the Crowley native was the seventh-winningest active coach in NCAA baseball at the time of his death (he ranks 28th all-time among Division I coaches and is one of only a handful to earn all his coaching wins in his home state), or that his Cajun teams made 12 NCAA Regional appearances and four Super Regional appearances to go with the 2000 College World Series.

“He broadened my horizons, really taught me was life was really about,” said former relief pitcher and Carencro product Kraig Schambough. “It was so much more than baseball.”

Schambough and 33 years’ worth of those pitching staffs got the daily dose, since Robichaux served as his own pitching coach throughout his career. But that didn’t mean his impact was limited to the mound. Jace Conrad, a first-team All-American at second base for the iconic 2014 team that went 58-10 and was ranked No. 1 nationally for part of the season while coming within one win of another CWS appearance, said Robichaux’s influence is still with him.

“In the business I’m in, it’s extremely competitive, so you fail a lot,” Conrad said. “When things aren’t going my way, besides my family, the one person I think about is Coach Robe. If I give up or I get down on myself, I know Coach Robe would get pissed off at me. That sticks with me on a daily basis. Not only do I want to make my family proud, I want to make Coach Robe proud.”

Robichaux is also honored with a statue that sits in front of Moore Field. Devey, who was part of those numbers and who shares UL Hall of Fame honors this week, was the driving force behind that statue, which was entirely funded by contributions from former players – to the point that outside contributions were not accepted to cover the $160,000 cost. And in contrast to most monuments, images of former players are also prominently featured.

“We all know Coach Robe would have never wanted a statue,” Devey said. “Knowing it’s something he wouldn’t have wanted, how do you do it anyway. If it’s funded entirely by his former players and done in a way that represents him the best, not glorifying Coach Robe but giving a message, we felt like Coach Robe would 100 percent approve.

“I was just so fortunate to be around him. To have him in my corner since I was 19 all the way to the time he passed, knowing he was just a phone call away for anything I ever needed … how do you thank a man for that. It’s just impossible.”