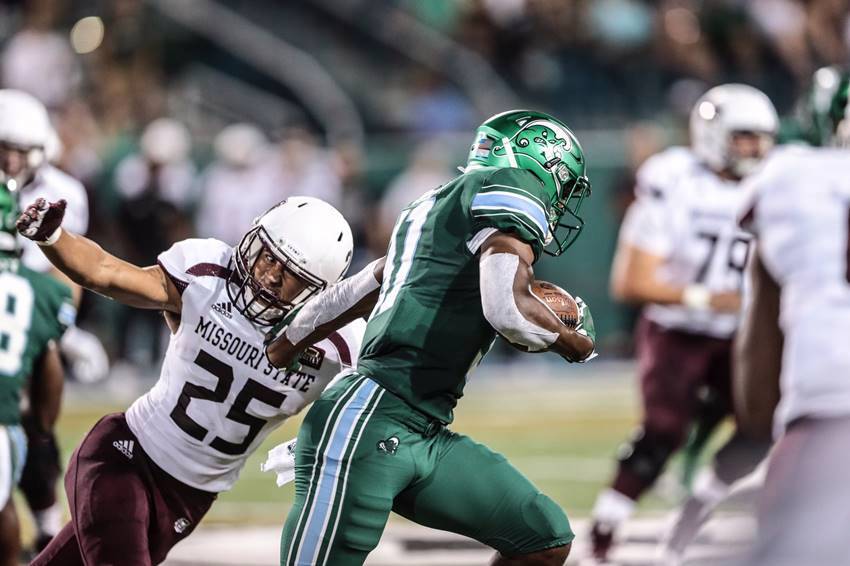 Tulane will look to build on its impressive 2019 campaign

NEW ORLEANS – It’s hard to believe that Tulane’s running back unit could be any better than last year’s squad that rushed for a program-record 3,162 yards, but with the return of five players from the 2019 squad, the Green Wave may very well be even better in 2020.

THE UNIT
• The running back unit features one senior, one junior, two sophomores and two freshmen.
• Tulane returns 56.1 percent of its rushing yards from last year’s squad.
• Junior Amare Jones enters the year as the team’s top returning rusher from a year ago, as he dashed for 371 yards on just 22 carries (6.1 yards per carry).
• Jones also registered 367 yards receiving, 141 punt return yards and 732 kick return yards. He closed 2019 with 1,611 all-purpose yards which ranked fifth in the American Athletic Conference and 22nd nationally.
• Tyjae Spears returns for his redshirt freshman season. As a true freshman, Spears made an immediate impact as he rushed for 192 on just 32 carries (6.0 yards per carry).
• Redshirt sophomore Cameron Carroll rushed for a single-season career high 364 yards on 72 attempts (5.1 yards per carry average).
• The Green Wave welcome back Stephon Huderson for his senior season. The Petal, Mississippi, native is the team’s lone senior. He has appeared in 34 career games and has made four starts.
• Redshirt sophomore Ygenio Booker returns for his redshirt sophomore campaign in 2020. The Brooksville, Florida, native is one of the team’s fastest players. He also scored his first career touchdown in 2019.
• Eric Charles, who hails from Houston, Texas, is the team’s lone newcomer to the unit this year.
• Jamaal Fobbs, who is entering his fifth full season with the Green Wave, coaches the running backs.
• The Olive and Blue lost top rushers Justin McMillan and Darius Bradwell from last year’s unit. In 2019, McMillan rushed for 745 yards and 12 touchdowns, while Bradwell dashed for 516 yards.
• Tulane also will be without the services of Corey Dauphine. Dauphine was set to return for a sixth season, but he suffered a season-ending injury prior to the season.

COACH FOBBS ON THE UNIT
“We have a lot of talent in our running back room, but most of all, we have a bunch of unselfish players who all push each other to be the very best.”

Tulane is set to kickoff the season in Mobile, Alabama, against South Alabama on Saturday, September 12. The Green Wave are coming off a record setting 2019 campaign that was highlighted by a win in the Lockheed Martin Armed Forces Bowl to give Tulane back-to-back bowl victories for the first time in program history. The Green Wave captured the AutoNation Cure Bowl in 2018.