There is clearly a structure in any job where the right fit makes a huge difference.

The square peg in a round hole fit takes place much too often.

When it comes to Graham Jarrott and De La Salle, there could not be a better fit for a school that emphasizes and advertises “the right fit.”

In this case, a prominent former player and a former coach at De La Salle is returning to his alma mater.

Jarrott has been named as the head coach at De La Salle, succeeding Ryan Manale who accepted the job as the head football coach at Jesuit last Friday.

The offensive coordinator at De La Salle in 2007 and 2008, Jarrott was previously in the role of offensive line coach at Brother Martin from 2003-06.

Jarrott played offensive line at De La Salle, graduating in 1998, before playing at Nicholls State from 1999-2003.

Inducted into the De La Salle Athletic Hall of Fame in 2017 for his superb athletic career at the school in football. Jarrott also wrestled and participated in track and field with the Cavaliers.

He spent the last four years as the offensive line coach at Archbishop Rummel under Jay Roth and Nick Monica, adding offensive coordinator duties to his resume most recently. Jarrott also assisted in basketball for the Raiders.

Jarrott was an integral part of am unbeaten Division I state championship team with the Raiders in 2019.

Prior to his time at Rummel, Jarrott spent eight years at Jesuit, as offensive line coach from 2009-14 and as offensive coordinator from 2014-16, serving under Wayde Keiser and Mark Songy.

At De La Salle, Jarrott joins his wife, Cheryl (Callejo) Jarrott, who serves as assistant to the President and as the manager of admissions and administration offices. Cheryl is also a De La Salle graduate, Class of 1998 and has served on the staff at her alma mater since 2004. Graham and Cheryl met in high school and remained together since their time at De La Salle.

“Its my dream job,” Jarrott said. “I have been in Catholic High School coaching and teaching for 18 years. I cannot tell you how excited I am.”

Jarrott is thrilled to be walking into a program stocked with many outstanding talented players.

“To be getting a football team with so many returning players, it’s one of the best football teams in the state at any level,” Jarrott said. “I think it is an absolute gem. After Ryan accepted the job at Jesuit, they reached out to gauge my interest. We had a few conversations. I expressed this is my dream job and what I wanted to do.”

Jarrott is very grateful for what Manale has done and for his cooperation in helping in the transition.

“Ryan has been great throughout the process,” Jarott said. “I cannot thank him enough for what he has done for my alma mater in building a great program and for being gracious in my taking over. We both started in coaching at around the same time and both have coached offensive line and understand each other quite well.”

While many coaches start off with tough, rebuilding jobs as their first head coaching opportunity, Jarrott has nothing of the sort at De La Salle.

“This is what I could have hoped for,” Jarrott said. “I have seen other guys chase head coaching jobs to be a head coach. I never wanted to do that. I wanted the best spot. I’ve been very fortunate to coach with good coaches. This is the right time, the right spot in the right place. I could not pick a better time to do this.” 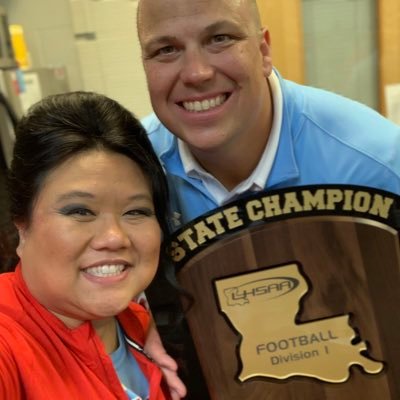 “I will meet the players on Monday,” Jarrott said. “I want to let them know where we are coming from. I will finish out my contract at Rummel and continuing to teach history but I will be at De La Salle every day, before school after school, whenever I can.”

While some De La Salle siblings are celebrating the move, Jarrott pointed out two other relatives who he cannot stop thinking about.

Jarrott heads home and is leaving a special place he feels has been home as well for the last four years.

“I am so grateful to Jay Roth and Nick Monica,” Jarrott said. “I loved my time at Rummel. Coach Roth talked to me for many years about coming to Rummel and I finally went. I learned so much from Jay at Rummel and working with Nick was awesome as well. Nick took over an established program from Jay and did not miss a beat.”

“I am doing the same taking over from Ryan as Nick did with Jay,” Jarrott said. There is a correlation. We are both fortunate to take over established, winning programs. Rummel has been special. Winning a state championship is the memory of a lifetime. That is what we hope to do at De La Salle.”

Graham departs 1901 Severn Avenue for another address he is acutely familiar with.