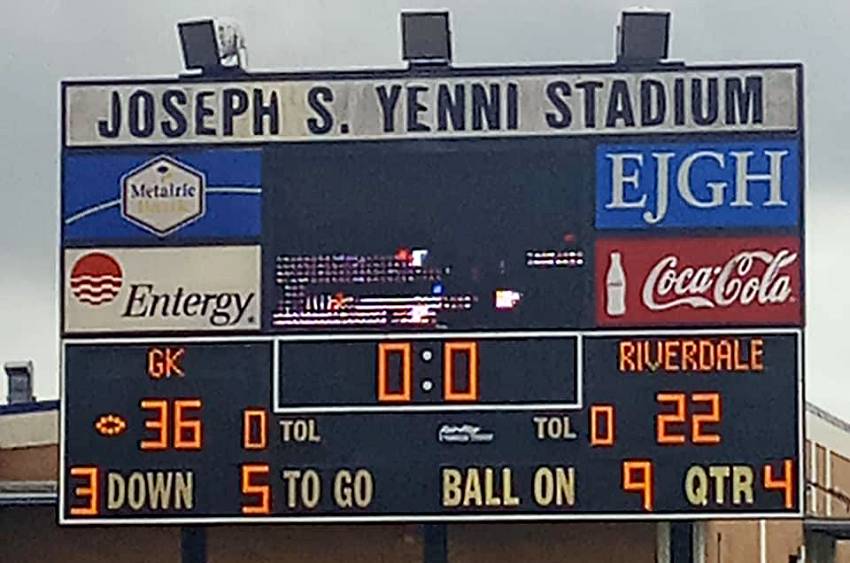 It has been a struggle, a mighty one, for Grace King on the football field.

The Fighting Irish have never accomplished much in the sport since the school went co-ed in the 1980’s.

Clearly, part of the issue has been the revolving door of coaches.

In Metairie Saturday afternoon, Glover and his program took the first step, downing Riverdale 36-22 at Joe Yenni Stadium in the rivalry battle for “The Rag”for the school’s first win since 2019 and the first win for the Fighting Irish over the Rebels in 13 years.

Quarterback Tyler Pasqua, running back Maiyan Barnes and wide receiver Eric Nicholas were standouts for the Fighting Irish Saturday. Nicholas caught a touchdown pass from Pasqua, who also ran for a score. Steven Knight and Ahmari Trepagnier each added a touchdown.

The game was tied 14-14 at halftime after the two teams alternated scores in the first half.

Grace King took a 28-14 lead in the third quarter before Riverdale made it 28-22. The Fighting Irish put the game away with a touchdown with 4:15 to play in the game.

“It’s been a long time coming,” Glover said. “It was gratifying for the kids, especially after missing the first three games and having to start with district play. We had non-district games we felt we had a chance to win. That made it tough. We had not had a district win in a while.”

Glover loved seeing the smiles on the faces of his players.

“The kids were very excited and hugging each other,” Glover said. “They just believe in themselves. They believed they could win. They deserve this so much.”

The Fighting Irish have a short week, facing East Jefferson in 8-5A play on Thursday night.

“I have been preaching that we can be competitive and win more games, that it is more a mindset than reality,” Glover said. “Athletically, we are comparable to several opponents but you have to believe you can win. By winning a game, that will go a long way toward convincing our players that we can do so.”

The coach is all in. The players are all in. Now, there is a win on the left side of the won-lost ledger and The Rag will reside on Division Street for the next year.