Give schools, parents, players a chance to decide to play high school sports in Louisiana now

On Friday and Saturday, it was wall-to-wall high school football from around the country on ESPN.

They are playing prep football in a ton of states, including Arkansas, Alabama, Iowa, Montana, New Hampshire, North Dakota, Oklahoma, South Dakota, Tennessee, Texas and Utah and Wyoming. We watched a game pitting an Ohio school against an Indiana school.

That, by the way, is Big Ten country, where they will not play college football for a while. Mississippi is set to start this week with Florida, Georgia and Kansas, West Virginia and Wisconsin are ready to start next week and in Kentucky and Missouri in a couple of weeks. South Carolina will start in late September.

That is 23 of the 50 states, still just under half of those in the country. It should be noted that all southern states, by and large, have played or will be playing before Louisiana plans to start in early October.

Just because football is being played in other states, including the preponderance, if not all southern states, in itself, is not the deciding factor, the optimum reason to begin playing football immediately in Louisiana. It certainly does not hurt the argument to play in our state, though.

When debating both sides of a particular issue, there is a case which must be made.

Of course, each state is different, with its case load of tests and positive coronavirus results.

As Governor John Bel Edwards stated in keeping Louisiana in Phase two this past week, our state is still in the “red zone,” when it comes to positive tests, per capita, in the country, placing us in the higher risk category.

I believe the Governor is an honorable man and is trying to do the right thing by his state and his citizenry. The cause for pause is understandable. It is relatively easy to discern why he has erred on the side of caution.

Ultimately, he was elected to make many tough decisions for our state. No one said it would be easy. 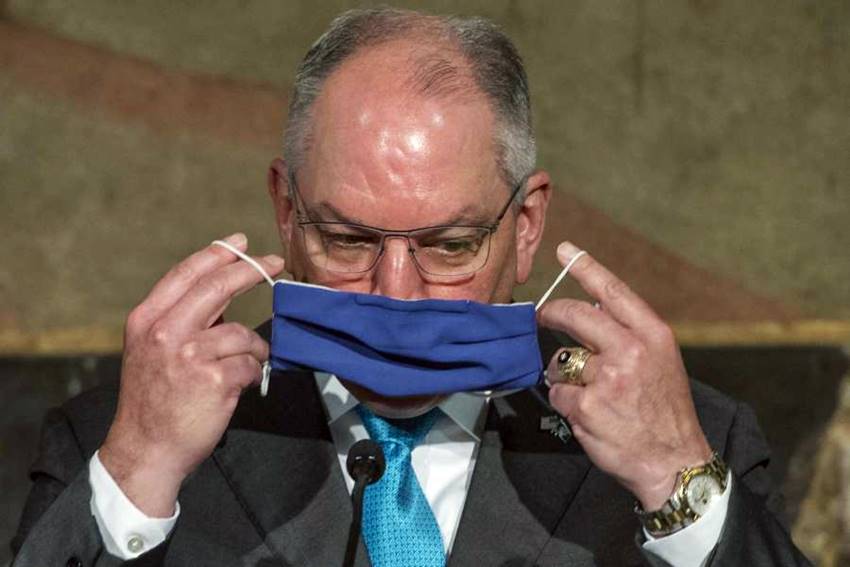 There are lots of questions but we know this: Only one man is driving the bus on COVID-19 in this state

This is not an easy topic but it is easy to make the case for the governor easing restrictions, which would include allowing high school football to take place in our state.

The LHSAA and Executive Director Eddie Bonine have done everything possible to keep hope alive, to keep a season alive, to set a timeline and schedule while buying as much time as possible and kicking the can a little further, if not nudging it down the road.

Not only does the governing body of prep sports in our state have to deal with the edicts of the governor and of medical organizations, there are politics as well (see Cleo Fields) which make the path toward playing more difficult to achieve.

The road is full obstacles, or I should say full of potholes to put it in New Orleans-specific terminology.

The latest is the impact of Hurricane Laura on the southwest and central parts of the state and the schools in those areas. Our most sincere thoughts and prayers continue to be with those impacted. All schools in those areas will work hard to get back to normal, along with their programs but several do not even have power, at this point.

The trend of thought would see to be trending along the lines of “we are not sure you can make good decisions to protect yourselves so we will make them for you.”

That is in stark contrast to the freedoms we are blessed to enjoy in the republic we inhabit.

It is true that the virus can affect anyone. I personally know six who have perished, in part, or as a whole, from COVID-19. It is serious. It is genuine. It is awful.

That list of those who have passed away includes my good friend Wayne Reese of McDonogh 35, where they absolutely want to play football now.

It is also true that the virus can affect the elderly disproportionately. It may affect African-Americans at a slightly higher rate that those of other backgrounds. It certainly impacts those with pre-existing conditions dramatically.

It also appears true that it affects and infects the younger population in lesser fashion.

That facet of the population represents the student-athletes on the high school level.

In the midst of doing interviews, having conversations and hosting guests on my radio shows over the past two months, I have yet to speak with a coach who did not want to play football, as scheduled, in the fall.

That includes all public school and private school coaches.

There is a united front here. They are not split, as the association is. I wish there would be a meeting of the minds to unite as an organization as they are on this issue.

Imagine that! Public and private schools can actually agree on a significant topic. There is the possibility of dialogue. Peace can exist.

State representative Larry Frieman penned a letter to Bonine which was endorsed by some public and private school coaches, asking that he intervene to allow schools to play football. 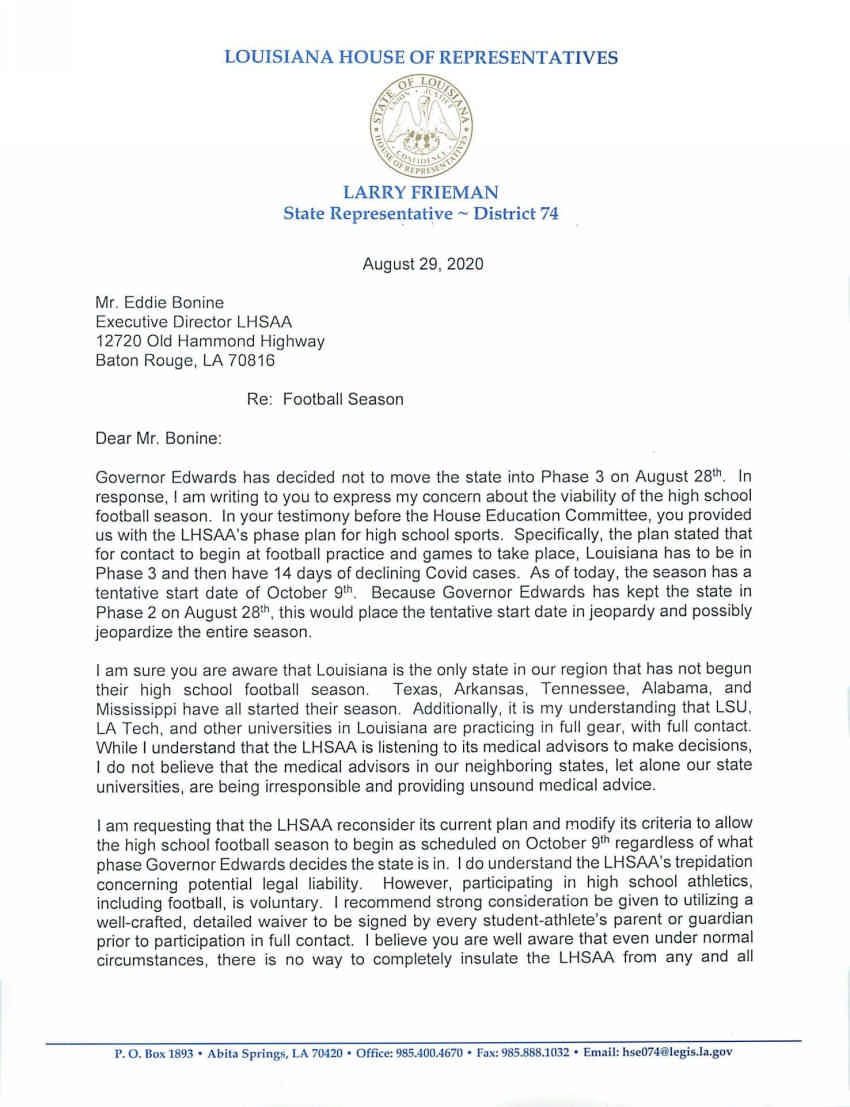 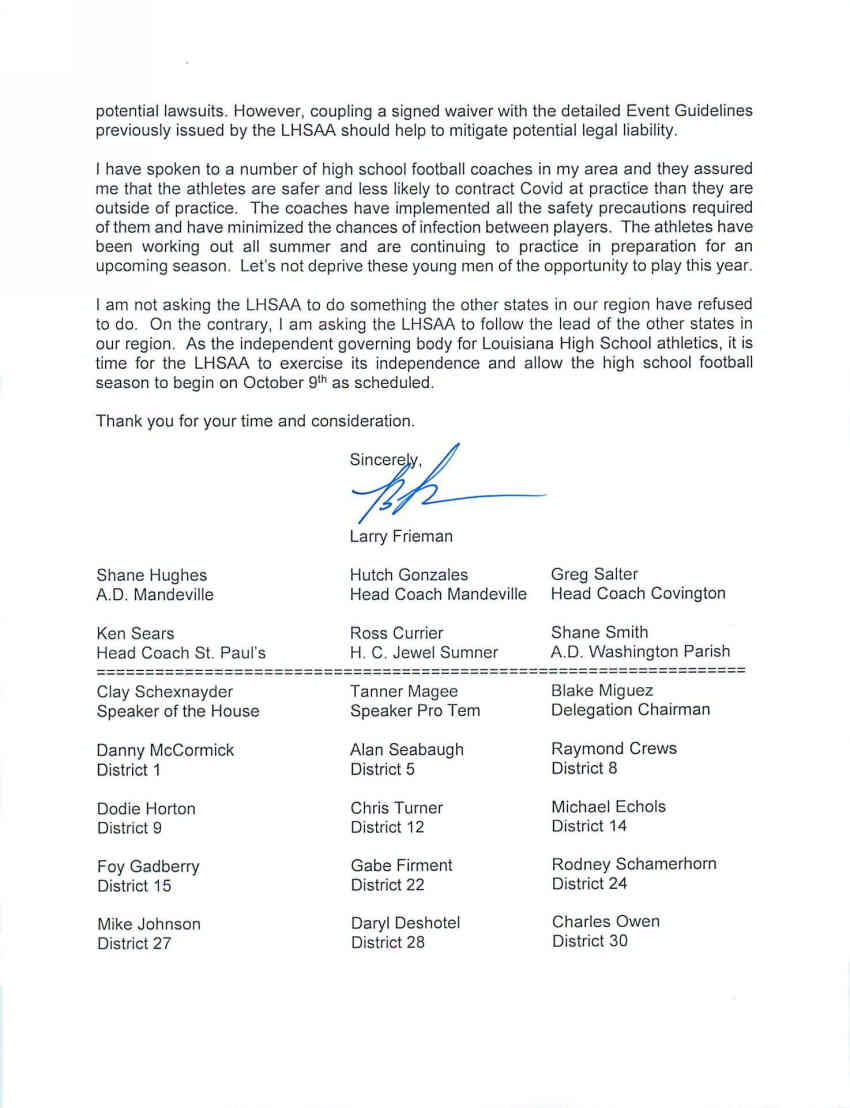 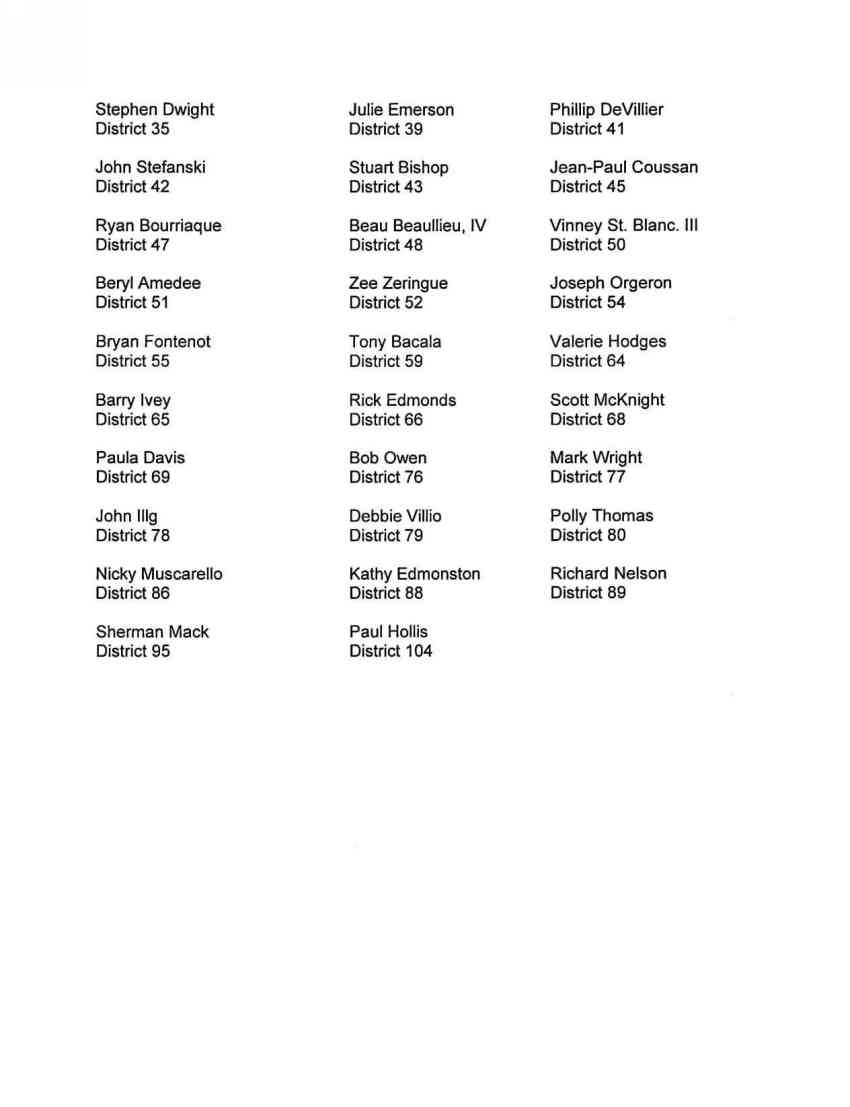 The college season got underway with a thrilling contest this past weekend in Montgomery with Central Arkansas rallying late to defeat Austin Peay 24-17 Saturday evening.

Here is a thought.

If high school parents, coaches, administrators, schools and school districts approve of allowing student-athletes to play and the student-athletes want to do so, why stop them from doing so?

If you are testing student-athletes, taking all precautions with masks, sanitation and temperature checks, among other actions, you are acting correctly.

If you have no positive tests later in the week with a game set for the weekend, why would you not allow games to take place?

If the returns come in from other states playing football and they are good, clean, that should provide a clear impetus to expedite moving forward and playing in Louisiana.

Virtually every coach I have spoken to, and they are numerous, has expressed that they can have their teams ready to play a regular season game with just two or three weeks of full squad preparation, including hitting, which no team has been able to do.

As it stands presently, the most number of regular season games that can be played is eight, a loss of two already. If Louisiana would allow schools to start in the third or even the fourth week of September, a full season could still take place.

The old saying states that “you never know until you try.”

If the effort is made to play and too many players or coaches are affected by infection, shut it down.

We have watched UFC, the PGA, MLB, MLS, the NBA, boxing, auto racing and horse racing operate just fine. While there have been some who have contracted the virus, the impact has been minimal and competition has continued.

College football, on several fronts, is drawing near to beginning.

When it comes to the stop sign mentality, change it to yield by proceeding with caution.

Sooner or later, the red light has to change to green.

When it comes to opting out, simply allow the others to opt in. Why penalize the whole for the benefit of a few? Are you in? Over and out!