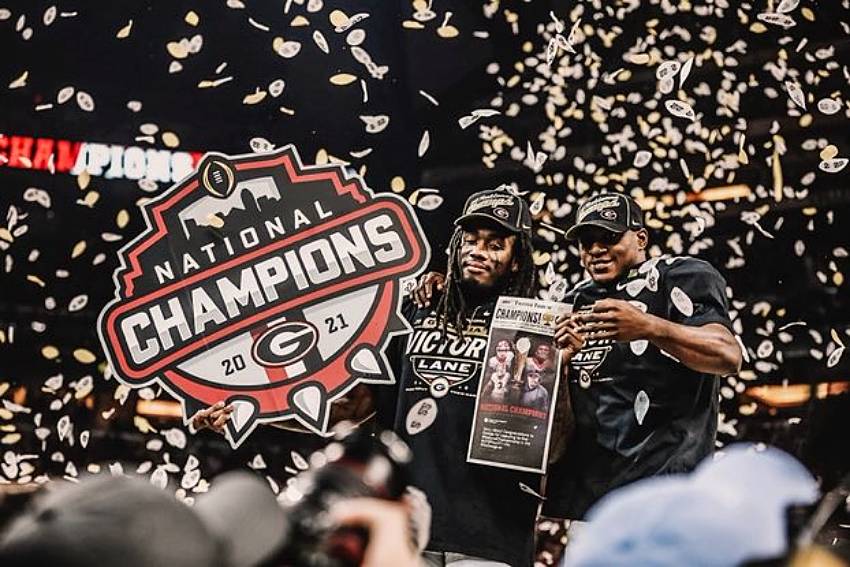 To call it significant would be accurate, if not an understatement.

The pupil has finally beaten the boss, the mentor, the king, the very best to ever coach the game.

Georgia should have beaten Alabama in the national championship game in January of 2018.

Georgia should have beaten a banged-up Alabama team in the national championship team in January of 2022.

The Bulldogs let the first opportunity get away.

The Bulldogs did not let the second opportunity get away.

Kirby Smart achieved vindication with Georgia’s 33-18 victory over the Crimson Tide in Indianapolis, finally overcoming the great Nick Saban after being 0-4 against him previously.

With the game on the line, Georgia dominated the rest of the way, outscoring Alabama 20-0 for the win.

Stetson Bennett overcame a critical fumble which led to Alabama taking the lead in the fourth quarter.

Bennett responded by going 4-for-4 the rest of the way with two touchdown passes., He completed 17-of-26 passes for 224 yards and two touchdowns.

The win vindicated my pick of Georgia to win the game. It also continued the streak of all five teams in playoff situations winning rematch games against opponents that beat them the first time around in the same season.

It is the first national championship since 1980 for Georgia and the Bulldogs won 14 games, a record for the program.

Alabama had won six of the last 12 national championships.

Despite losing, Alabama is still the best program in the country and it is not close.

The Crimson Tide have been in eight of those title games over the last 12 years.

While Alabama remains the top program in the country, Georgia can now match the Crimson Tide with athletes and now has the confidence to match wits with Saban as well.

Meanwhile, the bigger story remains the dominance of the SEC in the sport, much to the chagrin of haters around the rest of the country.

Yes, Alabama has overwhelmed all others in the SEC and in the country, for that matter, but the depth of excellence in the SEC is obvious.

The title is the first for Georgia since 1980.

Since 1980, the SEC has won 17 national championships in 43 seasons. Included in that number is the fact that six different SEC teams captured titles in that period, including Alabama, Auburn, Georgia, Florida, LSU and Tennessee.

Included in that number is the fact that Alabama, Florida and LSU all won multiple titles.

Since 1992, the SEC has won 16 national championships in 31 seasons. That includes all six schools mentioned, who won titles in that time frame.

Since 1998, the SEC has won 14 national championships in 25 seasons. That includes all six schools mentioned, who won titles in that time frame.

Meanwhile, Ole Miss has taken a step forward as a contender.

Texas A&M was a top five team in 2020 and has put together an elite recruiting class for 2022.

Arkansas and Kentucky are vastly improved.

Florida cannot possibly stay down for long with the immense talent pool to draw from in that state.

It may take two or three years but LSU should return to national prominence under Brian Kelly.

Then, there is the matter of the addition of Oklahoma and Texas.

Since the advent of the College Football Playoff in 2014, the Sooners have made the playoff four times in eight seasons. Oklahoma has won seven national championships, the last in 2000.

Ostensibly, being in the SEC will only enhance recruiting for Oklahoma and Texas.

Moving forward, it is hard, make that very hard to see any other conference even coming close to matching what the SEC offers in football.

Haters are going to continue to hate.

Some supporters of SEC schools never, and I mean never pull for other SEC teams in playoff situations. That hate is real.

Some supporters of SEC schools bow their chests and scream “SEC” at the top of their lungs when other SEC teams win in playoff situations. That love is real, a source of regional pride.

For the game of college football, it was a good thing that Georgia won the national championship Monday night, just as it was good for the game when LSU won in 2019.

Alabama and Clemson had been dominant in the championship equation, with Ohio State hovering near the top.

Of course, it would be great to see others around the country emerge as contenders to make the playoff, whether it is four teams, 12 teams or otherwise, more compelling.

In the short-term, that does not seem to be very feasible, possible.

Yes, Alabama was missing key players Monday night, a reason Georgia was favored to start with.

Yes, the Crimson Tide lost Jameson Williams in the contest, making the task even tougher.

The better team from what is clearly the best conference in the country won this time around.