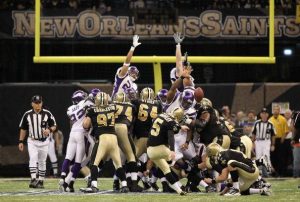 The New Orleans Saints have had many legendary kickers including Pro Football Hall of Fame inductee Morten Andersen. However, Garrett Hartley made the most important kicks in franchise history to help the Saints win their first Super Bowl.

Now the 33-year old is back in professional football after impressing enough in a tryout to be signed by the fledgling reboot of the XFL. Hartley has been assigned to the Seattle Dragons for the upcoming spring season.

The former University of Oklahoma standout last kicked in the NFL in 2013 for New Orleans but had short stints with Cleveland and Pittsburgh in 2014 and 2015 respectively.

For his career, Hartley was 85-of-104 on his regular season field goal attempts but a perfect 8-for-8 in the playoffs.