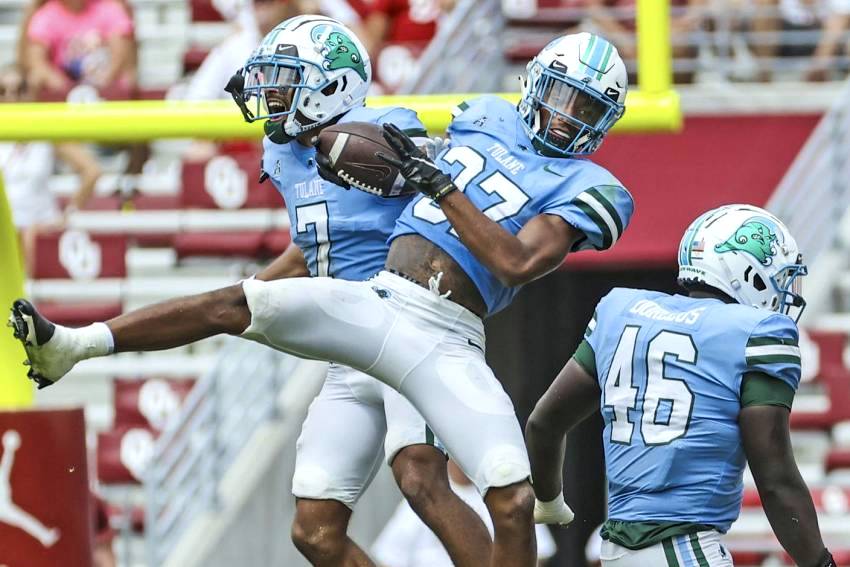 HURRICANE IDA MOVES HOME-OPENER TO BIRMINGHAM
-The Green Wave will hold their first home game of the season on Saturday, as they welcome Morgan State to Birmingham, Alabama. The game will be aired live on ESPN+ and will kickoff at 12 p.m. CT.
-The game was originally set to be played in New Orleans, but due to the devastating effects from Hurricane Ida, the decision was made on Sept. 2 to move the game to Birmingham, Alabama, inside historic Legion Field.
-The Green Wave’s last appearance at Legion Field came back in 2018 in a road game against UAB.
-Tulane’s matchup with Morgan State will mark the first all-time meeting between the two schools.
-The Green Wave will look to bounce back from a hard-fought 40-35 loss at second-ranked Oklahoma on Sept. 4.
-Following its effort against Oklahoma, Tulane received votes in the Coaches Poll.
-Tulane has won its last 16 games against teams from the Football Championship Subdivision (FCS).

FIRST AND 10
1. In home openers, Tulane has posted an all-time mark of 71-51-4. The Green Wave have split their last 10 home-openers.
2. Tulane radio analyst Steve Barrios will make his 2021 debut and begin his 39th season behind the mic on the Green Wave Radio Network.
3. Last week against Oklahoma, freshman quarterback Michael Pratt threw for a career-high three touchdown passes against the second-ranked Sooners. Pratt has thrown for a touchdown pass in every college game he has played in since making his debut in 2020 (11 straight games). He currently has 23 career touchdown passes and needs just three more to crack into the program’s all-time Top 10 in career touchdown passes.
4. Tulane scored 35 points last week on the road at Oklahoma. The Green Wave have now surpassed 30-or-more points in nine of their last 11 games, dating back to last season.
5. Pratt and senior linebacker Nick Anderson were both recognized by the American Athletic Conference this week as both were named to the league’s weekly honor roll.
6. The Green Wave have surpassed 200 yards rushing in 15 of their last 26 games dating back to the start of the 2019 season.
7. Tulane led the American in rushing yards per game last year, averaging 217.1 per game.
8. Tulane has rushed for over 100 yards or more as a team in 65 of its last 66 games. Tulane had its 56-game streak of rushing for at least 100 yards as a team snapped at Houston back on Oct. 8, 2020.
9. Tulane was one of just 15 FBS teams to play 12 or more games in 2020 (no games were canceled and team activities were never paused during the season).
10. Tulane had eight players named to the American Athletic Conference all-league team last season. The eight players named all-conference are the program’s most since 1997. Five of those eight players return for the 2021 campaign.

SCOUTING MORGAN STATE
• The Bears will look to bounce back following a 31-0 loss last Saturday against Towson.
• Morgan State finished the game with 10 penalties for 84 yards.
• Morgan State’s loss to Towson marked its fourth straight loss in the matchup.
• Head coach Tyrone Wheatley is in his third year on the sidelines for Morgan State.
• Senior Neil Boudreau, junior Eastern Michigan transfer Jairus Grissom and freshman Duce Taylor all saw time under center for the Bears opener versus Towson.
• WR Wesley Wolfolk is projected to be a favorite option in the Bears air attack. He totaled 22 receptions for 385 yards and 2 TDs in 2019.
• Defensively LB Devan Hebron returns as a leader for the Bears. He finished with 39 stops, in addition to 5.5 tackles for loss, two sacks and an INT in 2019.
• Hebron finished with five tackles, 2.5 TFL and a sack versus Towson on Saturday.
• The 2021 Morgan State Bears return 12 starters – four (4) on offense and eight (8) on defense.

LAST TIME OUT: FURIOUS SECOND HALF RALLY FALLS SHORT AT OKLAHOMA
• Tulane’s matchup with Oklahoma was moved to Norman, Oklahoma, as a result of he effects of Hurricane Ida.
• The Green Wave’s matchup with Oklahoma marked he 128th season of Tulane football
• With the loss, Tulane suffered its first season-opening loss since 2018.
• Tulane scored on its first drive of the game, as it went 55 yards in eight plays.
• The Green Wave and Sooners were tied at 14 after the first quarter, but Oklahoma reeled off 23 unanswered points in the second quarter to take a 37-14 lead into the locker room.
• Tulane responded in a big way, as it outscored Oklahoma 21-3 in the second half and had the ball with less than 2:30 remaining, but were unable to pick up the go ahead score.
• Tulane’s matchup with Oklahoma marked the 39th Top 5 opponent the Green Wave have faced in program history.
• The Green Wave’s 35-point effort were the most points Tulane has posted against a Top 5 team in program history.
• Tulane fell just shy of picking up its first-ever victory over a Top 5 opponent.
• The Green Wave faced Oklahoma for just the second time in program history. Oklahoma has defeated Tulane in both of its all-time meetings. Tulane offensive lineman Sincere Haynesworth carried the Wave of Change flag and Green Wave cornerback carried the No. 18 flag in honor of former Tulane student-athlete Devon Walker.
• Offensive starters for the Green Wave were QB Michael Pratt, WR Jaetavian Toles, WR Phat Watts, WR Shae Wyatt, RB Cameron Carroll, TE Tyrick James, OL Sincere Haynesworth, OL Corey Dublin, OL Joey Claybrook, OL Rashad Green and OL Caleb Thomas.
• Dublin’s start was the 50th of his career.
• Wyatt and Green both logged their first career starts for the Olive and Blue.
• Pratt finished the game with a career-high three touchdown passes and added one rushing touchdown. The freshman signal caller has now thrown for multiple touchdown passes in nine career games.
• Pratt’s 296-yard effort was a single-game career high.
• Tight end Tyrick James had career-highs with six receptions and 93 yards receiving.
• Senior wide receiver Jaetavian Toles collected his first career rushing touchdown in the first quarter.
• Redshirt sophomore running back Cam Carroll caught a career-high two receiving touchdowns.
• As a team, Tulane also rushed for 100 yards or more for the 65th time in its last 66 games.
• Defensive starters for the Green Wave were LB Dorian Williams, LB Nick Anderson, CB Lance Robinson, CB Jaylon Monroe, DB Jadon Canady, DB Ajani Kerr, DB Macon Clark, DL JoJo Dorceus, DL Adonis Friloux, DL Angelo Anderson and DL Jeffrey Johnson.
• As a team, Tulane held Oklahoma to just 118 yards of total offense and forced the Sooners into one turnover in the second half.
• Canady was the only true freshman to start on defense.
• Anderson led the team with 8.0 tackles and 1.5 tackles for loss.
• Tulane tallied a pair of interceptions. Canady collected his first career interception, while Clark recorded his fourth interception.
• Ryan Wright finished the 2021 season-opener with three punts for 149 yards (49.7 yard average).

GOING TOE-TO-TOE WITH THE BIG BOYS
• Last week’s near victory over second-ranked Oklahoma is nothing new for Willie Fritz coached teams.
• Fritz’s teams have made a habit of putting a big-time scare into their big-time opponents from the ACC, BIG 12 and SEC.
• In 2018, Tulane took Wake Forest into overtime, but fell 23-17.
• In 2019, Tulane trailed by just eight points (14-6) midway through the third quarter at 10th-ranked Auburn, but ultimately fell 24-6.
• Fritz’s Georgia Southern squad took Georgia into overtime in 2015.
• In 2014, Fritz’s Georgia Southern team nearly defeated NC State on the road, but fell 24-23. In that same season, GSU fell by just four points to a Georgia Tech team that went on to win the Orange Bowl.
• In 2012, Fritz’s Sam Houston State team held a 20-10 halftime lead over Baylor.

35 EQUALS WINS
• Under Coach Fritz, the Green Wave have scored over 35 points in 23 games. Tulane is 20-3 in those games.
• The Olive and Blue scored exactly 38 points in last three of their last six games in 2020, all of which were wins. Tulane scored 35+ in three straight games against FBS opponents for only the second time in Fritz’s tenure. The Green Wave achieved the feat last season in wins over Houston, Army and UConn in 2019.