You had the sense that it could be a long day with a ton of false starts and holding penalties against New Orleans.

The rival Atlanta Falcons wanted nothing more but to rain on the Saints’ parade on a day where former franchise stalwarts Jahri Evans and Roman Harper were honored on the field, completing their Saints Hall of Fame Induction weekend.

While there were some future Saints Hall of Fame inductees wearing the Black and Gold, it was anything but a Hall of Fame performance Sunday by the current Saints.

New Orleans was coming off an emotionally charged win over Tampa Bay. There was clearly a fear-factor that the Saints could not muster another emotional high after a huge win over the defending Super Bowl champion.

Unfortunately, the Saints could not.

New Orleans buried itself, trailing by 18 points in the fourth quarter with help by the Falcons and Matt Ryan.

The Saints recovered, staging a furious comeback, but in the end, it was not enough. The offense failed for three quarters but turned it on in huge fashion in the fourth quarter with 22 points.

The defense failed all the way against the pass, including when it mattered most.

That resulted in the least result you can have in a crushing loss in a division game that the Saints had to have in the hope of winning a fifth straight NFC South title and to stamp itself as a contender in the tough NFC.

Here are my Quick Takes from the 27-25 Atlanta victory over New Orleans.

**The Saints won the toss and deferred, giving the Falcons the ball first.

**The Saints opened with Marshon Lattimore on Falcons star Kyle Pitts. On the first play from scrimmage, Pitts beat Lattimore deep, Ryan hit Pitts but he dropped the ball, a huge break for New Orleans.

**Ryan bounced back and hit Cordarelle Patterson for 34 yards to the New Orleans 40-yard line.

**The defense stiffened and forced a punt.

**New Orleans did nothing on offense and Atlanta took the lead, going 64 yards in eight plays, taking 3:45 off the clock with Youghoe Koo making a 32-yard field goal to make it 3-0 with 4:26 to play in the opening quarter.

**The big play of the drive was a 39-yard completion from Ryan to Pitts, who was wide open.

**The Saints had seven rushing plays of nine yards or more in the opening quarter but trailed 3-0.

**New Orleans killed a drive with three penalties on offense, forcing a punt early in the second quarter.

**Saints receivers had their hands on four passes which they did not catch in the first half, including a pure drop by Adam Trautman to kill a drive on a fourth-and-three play at the Atlanta 36-yard line.

**C.J. Gardner Johnson also had his hands on a potential interception in the first quarter which he dropped. He left the game with a foot injury midway through the second quarter and it did not look good.

**Atlanta opted to go for it on fourth and less than a yard from its own 44-yard line. Mike Davis was stuffed for a yard loss by Pete Werner, with help from Cam Jordan.

Peter Werner with a massive stop when we needed it 😤🦾#ATLvsNO | 📺: FOX pic.twitter.com/DB6oib8TUE

**Erik McCoy was flagged twice for holding in the first half.

**Payton Turner, who just returned from injury, went down late in the first half, hurt again.

**Then, Kwon Alexander was flagged for taunting, setting up Atlanta with a first-and-goal at the New Orleans 3-yard line.

**Ryan connected with Olamide Zaccheaus on a 3-yard touchdown pass to make it 10-0 with six seconds left in the half.

**It was a back-breaking drive for New Orleans as Atlanta went 92 yards in 15 plays, taking 5:30 off the clock.

**The Saints had just 34 yards passing in the half as Siemian was 5-of-11 but had at least five passes which receivers could have caught.

**New Orleans took the second half kickoff and drove 60 yards in 12 plays, taking 5:24 off the clock. The drive stalled and Brian Johnson kicked a 35-yard field goal to make it 10-3 with 9:36 to play in the third quarter.

**Atlanta promptly answered, driving 81 yards in seven plays, taking 4:23 off the clock with Ryan rolling right and basically walking into the end zone untouched to give the Falcons a 17-3 lead with 5:13 to play in the third quarter.

**The big play of the drive was a 49-yard completion from Ryan to Zaccheaus, who was wide open.

**Alvin Kamara broke a 45-yard run late in the third quarter but it was wiped out by a holding call on Tre’Quan Smith.

**Then, Trautman was flagged for holding.

**Taysom Hill then entered the game at quarterback and promptly completed a pair of strikes, one for 14 yards to Smith and one for 19 yards to Deonte Harris.

**Then, James Hurst committed a false start penalty and the Saints put Siemian back at quarterback, a bit puzzling at the time as it appeared Hill had given the offense a lift.

**James Vaughters whipped Terron Armstead off the edge, sacked Siemian, stripped him and Steven Means recovered it and returned it to the New Orleans 6-yard line with 10:46 to play in the game.

**It took Atlanta just one play to put the game away as Ryan hit a wide, wide open Zaccheus on a 6-yard touchdown pass to make it 24-6 with 10:39 to play in the game.

The Wizard of OZ is in New Orleans 🧙‍♂️

**New Orleans finally put the ball in the end zone, driving 66 yards in eight plays, taking 2:42 off the clock with Siemian hitting Marquez Callaway on a 5-yard touchdown pass to cut the deficit to 24-13 with 7:57 remaining in the game.

**The Saints forced just their second 3-and-out, got good field position as a result of a late hit by Atlanta on a punt return by Harris, and drove 54 yards in six plays, using just 51 seconds to cut the deficit to 24-19 on a 2-yard touchdown run by Kamara. The pass on the 2-point conversion attempt failed.

**On the drive, Atlanta was penalized 27 yards for pass interference on Fabian Moreau and for a roughing the passer penalty on Foyesade Oluokun on a sack to set up the score.

**Atlanta got the ball back and Cam Jordan and Marcus Davenport registered sacks on consecutive plays, forcing a punt.

GET OUT THE WAY FOR CAMERON JORDAN 🔥🔥#ATLvsNO | 📺: FOX pic.twitter.com/2jxSyRsx7W

**Siemian, poised, then guided the Saints on a five play, 43-yard drive, hitting Kenn Stills on an 8-yard touchdown pass to make it 25-24 with 1:01 to play in the game. The two point conversion effort failed on a Kamara run.

**The euphoria of a great comeback win quickly evaporated, in a split second.

**On the next play from scrimmage, Ryan hit Patterson on a 64-yard streak pattern to the New Orleans 11-yard line. Patterson ran by rookie Paulson Adebo on the play.

**Mike Davis actually fumbled on the next play but alertly fell on the ball. Then, the Falcons simply had Ryan take a knee twice and Koo kicked the game-winning 29-yard field goal to give the Falcons the win.

Failing a pass rush, the New Orleans secondary could not cover an Atlanta receiving corps playing without Calvin Ridley, a week after the Falcons could not throw the ball at all against the Panthers.

Siemian played well, completing 25-of-41 passes for 249 yards and two touchdowns. The sack/fumble hurt but was not his fault. The lack of receivers making catches greatly hampered Siemian’s numbers and the New Orleans offense, as a whole.

The Saints hosted the Falcons, who were 1-7.

Atlanta, as a double-digit underdog, whipped the Saints 27-9 in New Orleans in a game the Saints simply were not ready to play.

We should know by now that when you play the Falcons, strange things can happen.

The inability to convert either of the 2-point conversion attempts proved fatal. So did the play on the backend of the New Orleans defense, which was simply poor.

Next week, the 5-3 Saints head to Nashville to take on a good Tennessee team, which is without star Derrick Henry.

Siemian showed that he can handle the starting spot. Hill, in his brief appearance, made a pair of good throws. It would have been nice to have Jameis Winston but that is not why the Saints lost this game.

On a day full of upsets, the Saints fell victim, at home, in the Dome, before a ton of frenzied fans who departed in very disappointed fashion. 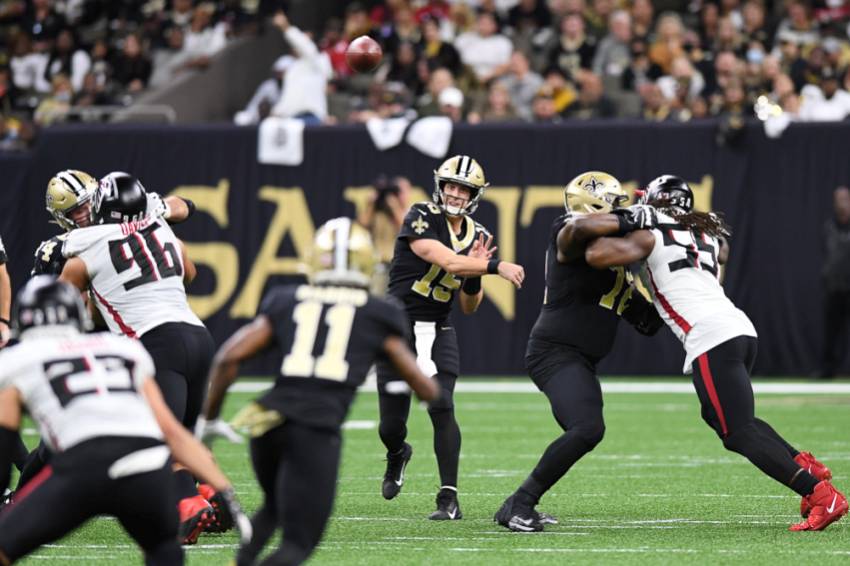 The New Orleans Saints had a lot of problems in their last-second 27-25 loss to the Atlanta Falcons on Sunday.