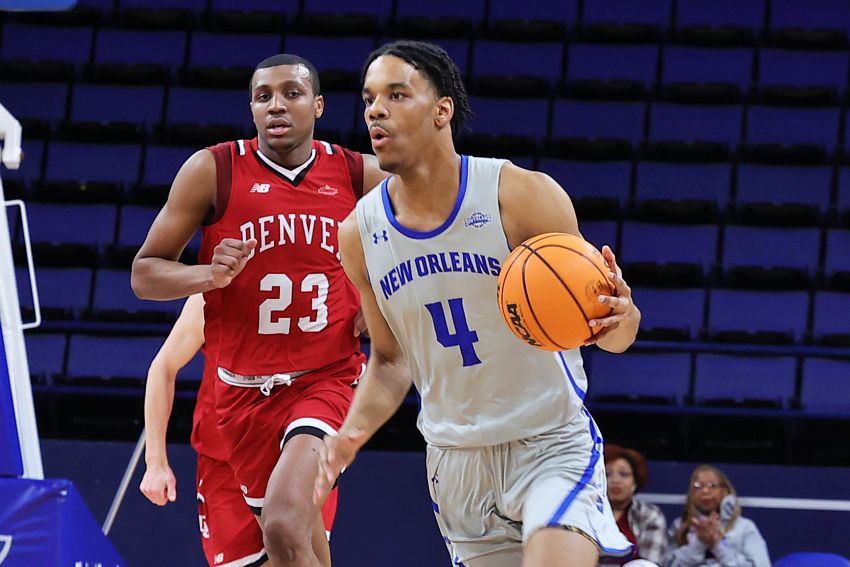 NEW ORLEANS, La. – Despite a huge second half Friday afternoon for the University of New Orleans men’s basketball program, the Privateers could not overcome the Denver Pioneers, falling 77-76 on the Lakefront in their final Big Easy Classic game.

Omarion Henry had a breakout game leading his team with 17 points, a career-high, along with four rebounds and one block in 19 minutes of play. This marks the true freshman’s second consecutive game with double-digit scoring.

“I just went out there and tried to do the right thing. I rebounded, crashed the boards, and my teammates were finding me in the right spots,” said Henry.

The Privateers (2-4) had five players reach double-figures in scoring output for the second consecutive time. UNO also topped Denver in five categories to include going six-of-15 from the arc, picking up 11 offensive boards, 20 assists and three blocks.

Khaleb Wilson-Rouse made four-of-six from behind the arc, contributing 16 points with seven assists to lead the squad.

Jordan Johnson also brought the heat against his former teammates as the Denver transfer guard put up 13 points and four assists. Tyson Jackson chipped in 12 points and four defensive boards while Simeon Kirkland had a season-high night with 10 points and four rebounds.

Coming off of a career high, K’mani Doughty led the team in assist dishing out five and also putting up eight points and six rebounds. Daniel Sackey also dished out four assists.

The Privateers were kept to five points in a 12-point deficit until the 10-minute mark when Wilson-Rouse hit a good jumper. They were able to close the gap to a five-point difference (35-30) going into the half.

UNO returned in the second half with a vengeance outscoring the Pioneers by 20% in field goals and three-pointers, but it was not enough to overtake Denver in the end as they made four free-throws down the stretch and won the game (77-76).

New Orleans will return to the Lakefront next Saturday, Dec. 3 for the White Out game presented by Helm Paint against local foe in the Louisian Ragin’ Cajuns at 4 p.m. CT. Privateer fans are encouraged to wear white. The first 300 fans will receive a free white out t-shirt. Additional deals include the family 4 pack (4 reserved tickets x4 meals for $40) and reserved tickets for just $5.04 with advance purchase. Visit unoprivateers.com/tickets to purchase tickets.

The Ragin’ Cajuns-Privateers matchup will be broadcast nationally on ESPN + and aired on NASH ICON 106.1 FM. The Voice of the Privateers, Jude Young, will be joined on color by Tic Price.