The media selection committee of the New Orleans Saints Hall of Fame has selected running back and special teams ace Fred McAfee as well as wide receiver Devery Henderson for induction in 2022, while longtime New Orleans Saints assistant athletic trainer Kevin Mangum has been chosen to receive the Joe Gemelli “Fleur de Lis” award for his vast contributions to the Saints organization.

McAfee, 5-10, 193, played 10 seasons in two stints with the Saints from 1991-93 and 2000-06 after being drafted in the sixth round (154th overall) of the 1991 NFL Draft out of Mississippi College. Hailed as one of the top special teams performers of his era, McAfee recorded 210 career special teams tackles, including 115 between 2000-06 during his second Saints stint, ranking fourth in the NFL during that time span. He added two forced fumbles and five fumble recoveries on coverage units as a Saint.

A 2002 PFWA All-NFL and Pro Bowl selection, McAfee played for three of the club’s division champion teams and has been affiliated with the team for all nine, including the 2009 Super Bowl XLIV Championship campaign. He played in 194 games during his 15-year career, including 122 contests with New Orleans, ranking 20th on the club’s all-time games played list at the time of his retirement. For his career, McAfee carried 304 times for 1,272 yards and eight touchdowns, caught 35 passes for 211 yards and returned 119 kicks for 2,422 yards.

McAfee first came onto the scene in 1991 as a rookie, not playing in a contest until midseason but finishing as the leading rusher for the NFC West champions, carrying 109 times for 494 yards (4.5 avg.) and two touchdowns. In 1992 and 1993, McAfee provided valuable depth at running back, but also received his first extensive NFL experience on special teams, returning 47 kickoffs for 973 yards (20.7 avg.) and adding two coverage stops.

McAfee played for the Arizona Cardinals, Pittsburgh Steelers and Tampa Bay Buccaneers from 1994-99, where he established himself as one of the league’s top special teams players with 88 stops, one fumble recovery and one blocked punt recovery.

McAfee returned to the Saints in Week Six of the 2000 season and made an immediate impact on special teams in 12 regular season games en route to the team’s first division title since 1991 and first playoff berth since 1992, carrying 40 yards on a fake punt, recording 11 tackles, forcing a fumble and recovering a fumble. In 2002, McAfee was selected to the Pro Bowl, forcing an interception on a punt play in the end zone in overtime of the season opener at Tampa Bay and added 16 tackles on the season and one forced fumble. In 2004 (26) and 2005 (30), McAfee led the team in special teams tackles, handling kickoff return duties in 2005. In 2006, the final season of his playing, he played in four games for the NFC South division champions, recorded four stops and had a six-yard rushing touchdown in his final NFL appearance in the regular season finale against the Carolina Panthers.

Since retiring following the 2006 season, McAfee has served in a player development role for the club and is now entering his second season as Vice President/Player Engagement. As part of the team’s commitment encouraging the lifelong wellness for its players, McAfee has developed programs over the past 15 years that allow players to develop off-the-field during and beyond their National Football League careers. Responsible for the team’s off-field training and educating players through club and league initiatives, he also organizes continuing college education opportunities, internships, life skills training seminars, financial education classes and family assistance.

Henderson, 5-11, 200, was selected by New Orleans in the second round (50th overall) of the 2004 NFL Draft out of Louisiana State University. He played in 124 career regular season games for the Saints from 2004-12 with 76 starts, caught 245 passes for 4,377 yards (17.9 avg.) and 20 touchdowns and carried 18 times for 119 yards and one touchdown, appropriately termed the “Superdome Special”, which took place against Atlanta on Monday Night Football in the reopening of the Superdome. Henderson also appeared in eight postseason contests with seven starts, posting 31 receptions for 464 yards (15.0 avg.) with four touchdowns and was a member of the club’s Super Bowl XLIV Championship team. One of the NFL’s top deep threats during his career, Henderson’s 18.1 yards per reception from 2006-12 was the NFL’s highest total and his career receiving average (17.9) remains a club record. Henderson’s five receptions of 75 yards or more from 2006-12 was tied for second-most in the NFL and his 24.8 receiving average in 2008 ranked first in the league by nearly five yards. Henderson owns the two highest single season receiving averages in club history, 24.8 in 2008 and 23.3 in 2006.

Mangum is among the club’s longest tenured employees, entering his 42nd season with the team in 2022, working for ten head coaches during that period. Since arriving in 1981, Mangum’s contributions have helped the Saints’ athletic training staff earn several awards, including the 2007 Southeastern Athletic Trainers’ Association (SEATA) Professional Athletic Trainers Award, the Fain Cain Memorial Award in 2006 and the NFL Athletic Training Staff of the Year in 1986 and 2006. Mangum received the Southeast Athletic Trainers Association’s 1991 Backbone Award, which recognizes the region’s outstanding assistant athletic trainer. In 2015, he was the NFC recipient of the Tim Davey Assistant Athletic Trainer Award, as voted on by his NFL peers with the Professional Football Athletic Trainers Society. He received a bachelor’s degree in athletic administration with a specialization in athletic training from the University of Southern Mississippi in 1981 and an advanced degree in physical education from the University of New Orleans in 1988.

Events surrounding the induction of McAfee and Henderson and the recognition of Mangum will take place during the weekend running of Oct. 28-30 in conjunction with the Oct. 30 home game against the Las Vegas Raiders in the Caesars Superdome. For more information about the New Orleans Saints Hall of Fame, please visit saintshalloffame.com or call (504) 471-2192. Additional information about the Hall of Fame weekend will be announced in the coming months. 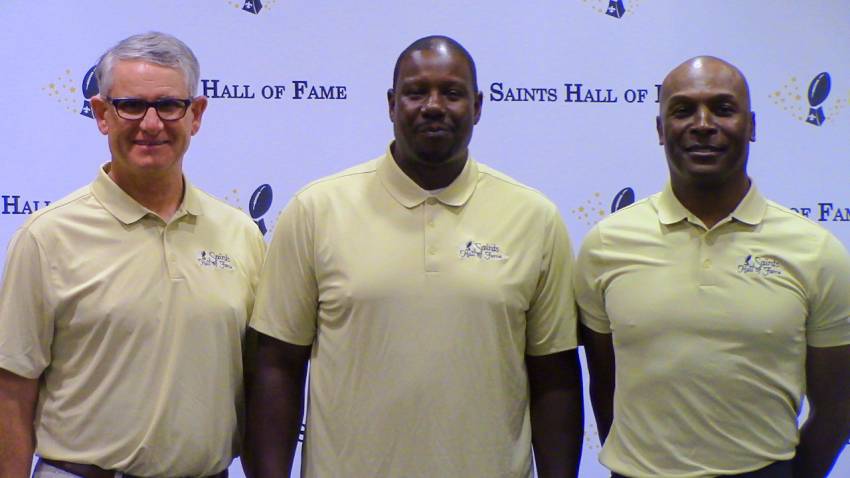