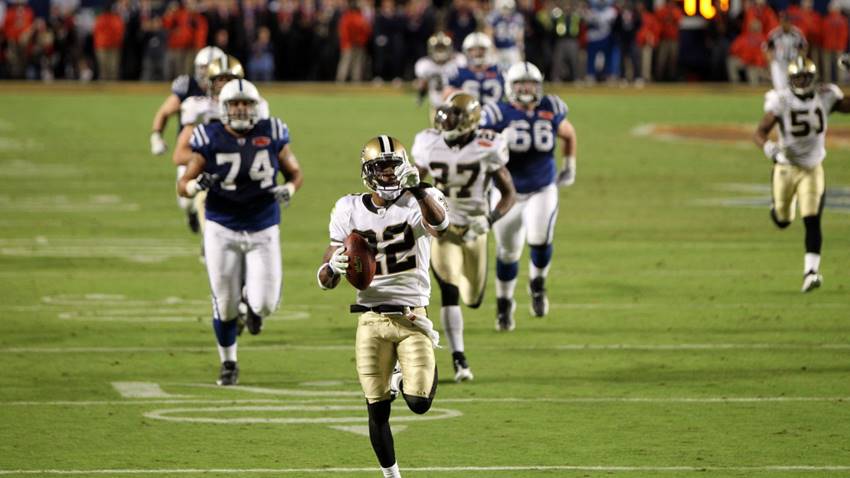 New Orleans, La – It has been announced today by the New Orleans Saints and their preseason television partner Gray Television and FOX 8 that Saints fans will be able to view four of the most memorable wins in franchise history on Gray’s regional station network and the club’s digital platforms during training camp. The re-broadcasts with updated elements are part of the “Epic Encores and Premier Predictions” series, which will also preview the highly-anticipated 2020 season.

On Saturday, August 29 at 7 p.m. CT, the series will continue with an enhanced replay of the October 25, 2009, 46-34 win at the Miami Dolphins, rebounding from a 24-3 deficit with five seconds left in the first half, matching the biggest comeback in club history. Staying undefeated and improving to 6-0, no other team in NFL history had preserved a perfect record this far into a season by erasing a deficit of more than 20 points. New Orleans overcame early struggles on offense and defense, coming alive at the end of the first half with five seconds left, when in a calculated decision by Payton and Brees with no timeouts remaining, the signal-caller dived up the middle for a one-yard touchdown, to move within 14 at halftime. The comeback progressed early in the fourth quarter on an acrobatic double reverse ten-yard rushing touchdown by RB Reggie Bush that featured a leap captured on a Sports Illustrated cover. It was completed with a two-yard quarterback sneak by Brees that was followed by a dunk of the football over the goalpost for the 6-0 signal-caller. This enhanced rebroadcast will feature commentary from Bushrod, Colston, Porter and Shanle.

On Saturday, September 5 at 7 p.m. CT, fans will enjoy a rebroadcast of the team’s December 10, 2006 Sunday Night Football 42-17 victory over the Dallas Cowboys at Texas Stadium. In Payton’s and Brees’ first season as the team’s head coach/quarterback combination, the dominating win guaranteed New Orleans their first winning campaign since 2002 and served as a springboard to the team’s first NFC Championship game appearance. For Payton it was especially significant as Dallas’ head coach was his mentor Bill Parcells, for whom he coached under with the Cowboys from 2003-05 before being hired by New Orleans. The Saints jumped out to a 21-7 halftime lead as New Orleans outgained Dallas 536-347. The rebroadcast will feature enhanced commentary from Brees, who passed for 384 yards, five touchdowns and zero interceptions, FB Mike Karney, who scored three touchdowns, Evans and Stinchcomb, who blocked for a rushing performance of 159 yards on the ground, RB Deuce McAllister, who rushed for 111 yards, Shanle, who led the team with six solo tackles and Stinchcomb.

The series will close out with an enhanced rebroadcast the following night on Sunday, September 6, at 6 p.m., when the team’s Monday, November 30, 2009 38-17 win over the New England Patriots at the Superdome will replay. New Orleans improved to 11-0 en route to a 13-0 start and the Super Bowl XLIV Championship as posted the only perfect passer rating (158.3) of his career as he completed 18-of-23 passes for 371 yards, five touchdowns and zero picks. The replay will feature commentary from Brees, Colston, who was on the receiving end of four of Brees’ completions for 121 yards and one scoring grab, Evans, Harper, who had a team-leading ten defensive/special teams tackles, Shanle, Stinchcomb and Thomas, whose 18-yard receiving touchdown helped New Orleans reach the end zone for the first time.

In addition to the rebroadcasts, the content will include pregame and postgame shows hosted by FOX 8 Sports Director Juan Kincaid and FOX 8 Anchor/Reporter Sean Fazende. The shows will include the latest news and information from Saints training camp along with interviews with current Saints and Saints legends. This special series is being produced by Tupelo Honey Productions, Gray’s sports and entertainment production company.