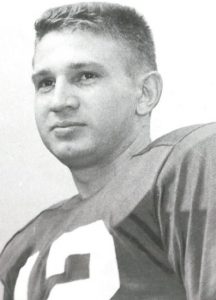 Gene Newton, whose long association with Tulane began by leading a pair of upsets over top-10 teams in the mid-1950s, died Saturday. He was 84.

Newton, a native of Shreveport who was a multi-sport star at Byrd High School, played quarterback for the Green Wave from 1955-57, while the school was still part of the Southeastern Conference but in the process of de-emphasis.

Standing 5-foot-10 and weighing 160 pounds, Newton was known as “Mouse” – a name placed on him by former teammate Eddie Khayat – but he played much bigger as Tulane went up against the best programs in college football on a weekly basis.

He led the Wave to a 27-13 victory over eighth-ranked Auburn in 1955, in which he threw for a pair of touchdowns, and 10-3 win over sixth-ranked Ole Miss in Jackson the following year, in which Newton’s 86-yard touchdown run accounted for the winning margin. More than 60 years later, that run is still the seventh-longest in school history.

Coincidentally, Tulane plays Auburn on Saturday – a team it last defeated on that day at old Tulane Stadium in 1955.

Newton was a second-team All-SEC selection by The Associated Press and United Press International in 1956 after helping the Green Wave post a second straight winning season. Tulane went 5-4-1 in 1955 and 6-4 in 1956.

Though he entered the investments field after graduation, Newton continued to assist Tulane in fund-raising, broadcast and external relations efforts.

Newton was inducted into the Tulane Athletic Hall of Fame in 1989 and was named the Distinguished American by the Allstate Sugar Bowl chapter of the National Football Foundation and College Football Hall of Fame in 2001.

A memorial gathering for family and friends will be held Thursday from 4-6 p.m. inside Tulane’s James J. Wilson Jr. Athletic Center. In lieu of flowers, the family is asking for donations to the Green Wave Club.