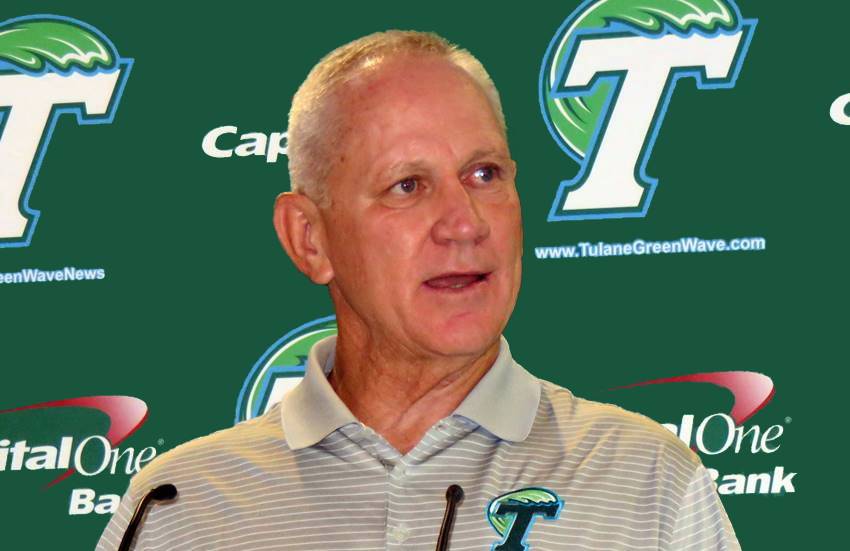 “I’ve been getting so many calls,” Dickson said Thursday, “starting with the NCAA, then the commissioners, and a ton of (athletic directors).”

The realities that leaders in college athletics are facing in the wake of the COVID-19 pandemic are very similar to what Dickson faced 15 years ago as athletic director at Tulane, when Hurricane Katrina devastated New Orleans.

“I’m obviously empathetic,” Dickson said. “I can feel it in their voices – the gravity, the pain. That does give me flashbacks.”

Commissioners from the Group of Five conferences – including the American Athletic Conference, of which Tulane is a member – sent a letter last week to NCAA president Dr. Mark Emmert seeking “temporary relief from several regulatory requirements for a period of up to four years” in the wake of the COVID-19 pandemic.

Among the requests they made relief in the minimum number of sports to be sponsored to remain Division I – a concept similar to what Tulane and UNO asked for, and were given, in the wake of Katrina – along with a loosening of requirements for football attendance, scheduling and roster sizes.

“The big difference, and it’s to their advantage, is they’re all in it together,” Dickson said. “They have the opportunity to put some sanity in the system. (They asked) for the relief unilaterally – it was for all 351 (Division I) schools.”

On the heels of a semester away from campus – Tulane’s athletic programs and staff operated from four different universities in Louisiana and Texas – Dickson was forced, as part of university-wide cutbacks, to slash by 50 percent the number of programs and staff in his department.

Dickson called the December day when he had to tell the members of those eight programs – men’s track, men’s and women’s tennis, men’s and women’s golf, women’s swimming, women’s soccer and men’s cross-country – their sports were being eliminated, “the worst … in 30 years as an AD, by far.”

“I faced more than 100 of the best ambassadors the university has,” said Dickson that day, “and told them there are no longer opportunities for them at Tulane University.”

Without the waiver from the NCAA and Conference USA, though, Tulane athletics might not exist.

“We went to the conference and the NCAA (and said) we’re going to continue to exist, but not in the form you require,” Dickson said. He added that he told then-president Scott Cowen, “No matter what we do, we have to maintain (Title IX) equity. We kept our women’s running sports.”

He eventually brought the Green Wave program back to a full complement of sports before retiring in 2015.

“The first thing that I tell all (those who call) is you have to determine what’s important,” Dickson said. “Going back 15 years, what we said was above everything else, everything we do with our student-athletes has to be done with their best interests in mind.”

Getting “back to normal” may not be an option any longer.

“It’s already past the point of resuming as normal,” Dickson said. “That’s off the table. It’s not going to be business as usual.”

Again, he emphasized the difference between Katrina and COVID-19 is where one directly impacted a couple of Division I programs, this is hitting across the board.

“It’s not just preserving your own ship, it’s the people around you,” Dickson said. “That’s an advantage if you use it strategically.”

Though only a handful of athletic departments are self-sufficient, all schools and conferences have to be able to bring in income through athletics, whether it’s ticket sales, television contracts or sponsorships.

“What is critical to our survival? In order for us to still maintain departments and programs, we really have to compete in football and men’s and women’s basketball,” Dickson said. “That’s why you’re hearing talk of football (in the spring). Those are the kind of decisions they’re going to have to make.”

Unlike pro sports, college athletics are one part of a university environment. The decisions universities make about how they operate can and will play a part in what their athletic departments do.

To that end, Big XII commissioner Bob Bowlsby said in a teleconference with Vice President Mike Pence earlier this week that campuses need to be open for sports to happen. “Our players are students,” Bowlsby said. “If we’re not in college, we’re not having contests.”

Dickson disagrees. “There can (be sports without students on campus),” he said, “and we were the test pilot. Tulane wasn’t open. We did it with 16 teams.”

He suggests games without fans, or “studio-produced events,” might be the short-term answer to help fulfill the television contract. “If they’ve been green-lighted,” he said of those men occupying his former chair as an AD, “they’re going to consider every option.”

At the end of the day, how important is it for college athletics to exist?

“That’s the threshold question,” Dickson said. “Just like the institutions are going to make every effort (to have classes) – they’ve continued to operate in virtual models and whatever means possible – I think athletics will likely reflect that.

“We’re an essential part of the critical mass of every university. We’re obviously not going to go forward in a status quo, but just like the universities are going to keep doors open through whatever means are feasible, then athletics will likely follow suit.

“To do it recklessly or without the regard the well-being of everyone involved shouldn’t be green-lighted,” he continued. “If there are beneficial ways to operate some type of model, that’s what they’re going to explore. The alternative is even tougher to deal with.”

It wasn’t until the 2011-12 school year that Dickson was able to get Tulane’s program back to a full complement of sports and staff.

“For three years, we were allowed only to exist because the university was trying to survive,” he said. “We were cut to the bone. Our programs were cut in half, our staff was cut in half. It wasn’t like we could roll up our sleeves and go fix it.

“Six years from now you’re going to be normal. I wouldn’t recommend that to anybody.”

With that, there were more recommendations to make. He had two more calls to return from sitting athletic directors who had called during the conversation.