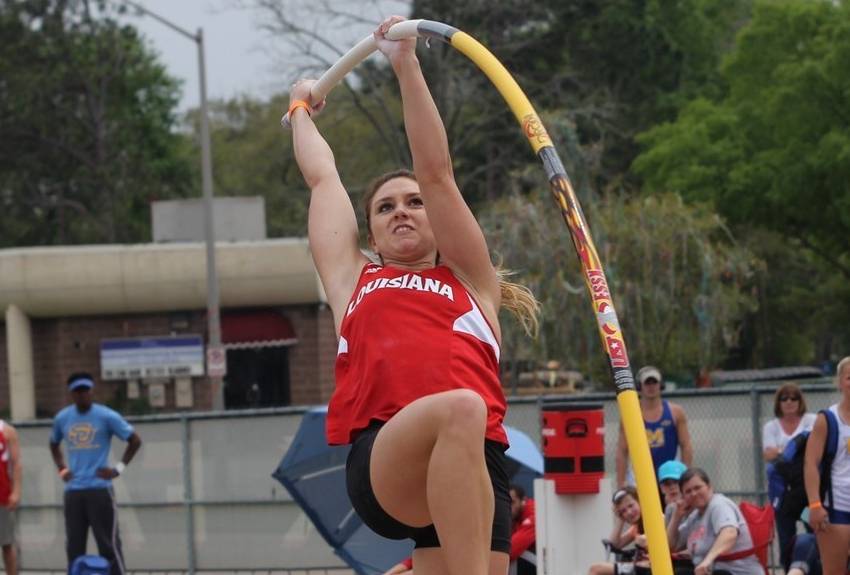 EUGENE, Ore. – The third time – in more ways than one – turned out to be the charm for Louisiana Ragin’ Cajuns Track and Field alum Morgann Leleux.

The New Iberia native out of Catholic High, former All-American at the University of Georgia and 2016 All-American at Louisiana cleared 15 feet, 5 inches on her final attempt in the women’s pole vault to finish second overall at the U.S. Track and Field Trials on Saturday at historic Hayward Field.

After failing to qualify at the 2012 Trials and finishing fourth overall – ultimately serving as the alternate for the 2016 U.S. Team – Leleux secured her spot in the lineup for the Tokyo Summer Games, which begins on July 23, by matching her personal-best.

Leleux, the Ragin’ Cajuns and Sun Belt Conference record-holder in pole vault (15-1), breezed through her first three jumps, clearing 14-3 ¼, 14-9 and 15-1 each on her first attempt before missing on her first two attempts at 15-5.

With NIKE’s Katie Nageotte the first to clear the top mark of the night, Leleux solidified her spot on the team by clearing the bar on final attempt and becoming the eighth Ragin’ Cajuns athlete to qualify for the Summer Games.

Both Leleux and Nageotte passed on the next mark at 15-7 before Leleux retired after one attempt at 15-9 and Nageotte would clear 16-2 ¾ to post the best mark in the world. Sandi Morris, the world’s No. 3-ranked pole vaulter and 2016 Silver medalist, earned the third spot on the U.S. Team after clearing 15-1.

Louisiana’s Claire Meyers, making her first appearance at the U.S. Olympic Trials, came up short in her bid for Olympic glory after finishing 11th overall in the women’s javelin. Meyers, who qualified for the finals after posting a mark of 161-6 on her final attempt on Friday, opened the finals with a throw of 146-7 on her first attempt before posting her best throw of the night (156-6) on her next try.