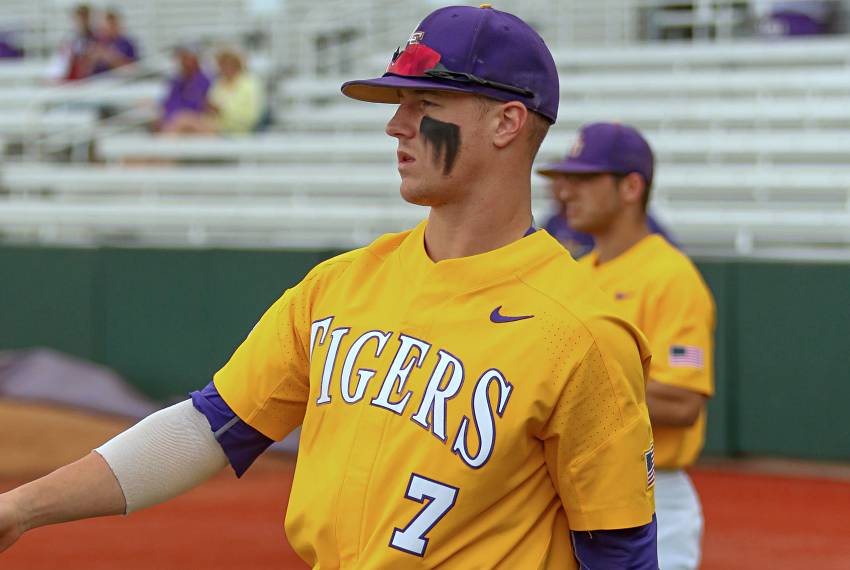 Just over a week after a pre-trade deadline move from Oakland to Chicago, Greg Deichmann has received his ticket to the big leagues.

The former LSU and Brother Martin star was inserted into the starting lineup in right field for the Chicago Cubs for his first game in the major leagues Friday. The Cubs host the crosstown rival White Sox for a weekend series.

Deichmann put up impressive numbers in Triple-A with .300/.433/.452 slash line for the A’s before coming over to the Cubs in a July 27 trade that sent Andrew Chafin to Oakland.

The 6-foot-2, 205-pound Deichmann was a second round choice by the A’s out of LSU in the 2017 MLB Draft. Before his days in Purple and Gold, Deichmann was a standout shortstop for Brother Martin who has since settled into his role as a right fielder.

BATON ROUGE, La. – Former LSU outfielder Greg Deichmann was called up Thursday night to the Major League roster of the Chicago Cubs. He is in the starting lineup for Friday’s game versus the Chicago White Sox in Wrigley Field, batting fifth and playing right field.

Deichmann, a product of Metairie, La., played at LSU from 2015-17, earning first-team All-America honors in 2017 after hitting .308 with team highs of 19 homers and 73 RBI. He helped lead LSU to the SEC regular-season championship, the SEC Tournament title and the College World Series Finals.

He was a two-time member of the SEC Academic Honor Roll as a business administration major, and he was voted the MVP of the 2016 NCAA Baton Rouge Regional.

Deichmann is the 21st LSU player coached by former coach Paul Mainieri to reach the big leagues. He began his professional career in the Oakland organization after he was selected by the Athletics in the second round of the 2017 MLB Draft.

Deichmann increased his stock dramatically by returning to LSU for his junior season after he was selected in the 26th round in 2016 by Minnesota as a draft-eligible sophomore.

LSU has had at least one former player make his MLB debut in 28 of the past 31 seasons. The Tigers have produced a total of 79 Major Leaguers during their illustrious baseball history.