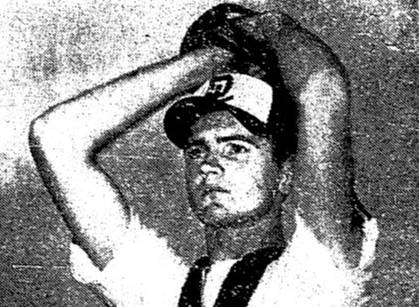 Jimmy Harwell was a high school and American Legion phenom who had all the makings of a future major leaguer. His 1956 season with the De La Salle High School-based La Rocca Enterprise American Legion team attracted the attention of major-league scouts, and it still ranks among the best in New Orleans amateur baseball history. Yet his story turned out not unlike many before him who ultimately fell short of reaching the big leagues. An injury derailed his ascent to the Los Angeles Dodgers in the early 1960s.

Harwell had just finished his junior year at De La Salle High School when he pitched for coach Johnny Altobello’s La Rocca American Legion team in the summer of 1956. Back-to-back games in which he pitched a one-hitter and a no-hitter (a near perfect game) established him as the pitcher to beat in order to win the city American Legion title. At one point he hurled 38 scoreless innings. The right-hander pitched his sixth shutout of the season in the city championship series over A&G, who gave him his only defeat of the season.

In the state Legion playoffs, Harwell pitched games with 15 and 17 strikeouts, as La Rocca defeated Monroe in the finals. LaRocca won the regional title against Amarillo, with Harwell being named the tournament MVP. Besides recording two wins, he went 4-for-5 at the plate in games he did not pitch.

Harwell recorded his 16th victory in the Legion sectional title game against Conway, South Carolina. Harwell was named the most outstanding pitcher of the tournament. The win earned La Rocca a berth in the Little World Series in Bismarck, North Dakota. It was the first time a New Orleans-based team reached the World Series since 1946, when Jesuit won the overall title.

Harwell pitched a one-hitter with 13 strikeouts in La Rocca’s opening game against Yonkers, New York in the World Series. A loss to St. Louis in the next game put La Rocca into the loser’s bracket. But Harwell helped them get back into contention with wins over Roseberg, Oregon and St. Louis. However, St. Louis defeated LaRocca in the final game.

Harwell’s three wins (including his 19th of the season), 34 strikeouts in 26 2/3 innings, and .055 ERA earned him the national American Legion Player of the Year award. Harwell was honored at the Baseball Hall of Fame in Cooperstown with a plaque containing his name and those of previous winners of the award. He was also named “Outstanding Athlete of the Year” by the New Orleans Athletic Club.

Even though Harwell still had a year remaining in high school, the Washington Senators were reportedly interested in him.

In addition to his baseball stardom, Harwell’s athleticism carried over to the basketball court, He was also an All-State basketball performer for De La Salle High School in 1957 when they captured the state title.

He was named to the Times-Picayune All-Prep baseball team during his senior season, posting a 3-3 record and leading the district in strikeouts. He played in the All-American Amateur Baseball Association league during the summer, posting a three-hit shutout for the All-American all-star team that competed in Johnstown, PA.

While there were rumors of interest in Harwell by the Philadelphia Phillies, Harwell decided to enroll at Tulane with the intention to play basketball and baseball. But then in January 1958, he inked a contract with the Los Angeles Dodgers that included a $50,000 bonus. He joined a small group of New Orleanians, including Clarence Zimmerman and Tookie Gilbert, who had previously signed for similarly large bonuses. Altobello, who had developed some of the top talent in the city, told the Times-Picayune at the time, “Jimmy is a great, all-around athlete, one of the best I have ever coached.”

Harwell spent his first pro season in 1958 with Single A Macon and finished with a 12-12 record and 3.46 ERA, helping them win the South Athletic League playoffs. When the Dodgers front office looked to the organization’s future, Harwell was mentioned as one of the future big-league players.

He got a promotion to Double A Victoria for the 1959 season and responded well with a 12-9 record, including 10 complete games for the regular-season champions of the Texas League. A mid-summer edition of The Sporting News touted Harwell as a promising major-league candidate.

After a 9-9 season with Double A Atlanta in the Southern Association in 1960, Harwell continued his upward path with another promotion to Triple A Spokane in 1961. However, he incurred an ankle injury that put him on the disabled list in mid-June through the rest of the season. He finished the season with a 4-6 record in 11 appearances.

Early in the 1962 season with Spokane, Harwell developed an arm injury that put him on the disabled list again, in order to obtain treatment. Rejecting an option involving surgery, he was re-instated by Spokane by the end of June. He made only one start in 15 appearances and finished with a whopping 10.50 ERA in 24 innings.

He was assigned to Albuquerque in 1963, but his arm had still not fully recovered. He went on the disabled list for the third time and did not return. In five minor-league seasons, he compiled a 37-36 record with a 4.28 ERA.

Still only 24 years old when he retired, Harwell returned to New Orleans where he stayed involved in the game, playing for multiple local semi-pro teams and later coaching youth baseball.

Who knows? If Harwell hadn’t been injured, he might have eventually become part of the Dodgers’ renowned pitching rotations of the 1960s that included Sandy Koufax, Don Drysdale, Don Sutton, Claude Osteen, and Bill Singer.

Rene Esquerre, whose brother Steve played with Harwell for De La Salle, remembers seeing Harwell play. “He was a strong guy who could throw ‘seeds.’ He was a dedicated athlete, outstanding in both baseball and basketball. When he wasn’t pitching, he played shortstop and hit third in the batting order.” Esquerre added, “In my mind, he was one of the top five athletes to come out of De La Salle.” This high praise comes from someone (Esquerre) who saw countless athletes as a coach and supervisor for New Orleans and Jefferson Parish recreational departments for over forty years.

Harwell was a member of the inaugural class of De La Salle’s Sports Hall of Fame in 2000. He was inducted into the Hall of Fame of the Diamond Club of Greater New Orleans in 2000.